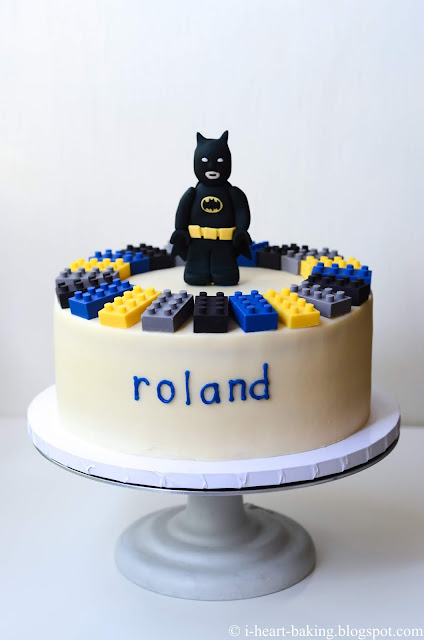 I've been making birthday cakes for Doan's son ever since his first birthday, and his fourth birthday was no exception! This year the theme was Lego Batman, so we decided that I'd make a Lego Batman fondant topper, and since I already had a Lego chocolate mold, I decided to make colorful edible Legos to decorate with as well!

First I made the fondant topper in advance, in order to give it time to dry. I started by using black fondant (or you could use white fondant and tint it black), made a little log, folded it in half to make two legs, and then started them shaping them to look more like Lego character legs. (Using a mini rolling pin worked great for this!) 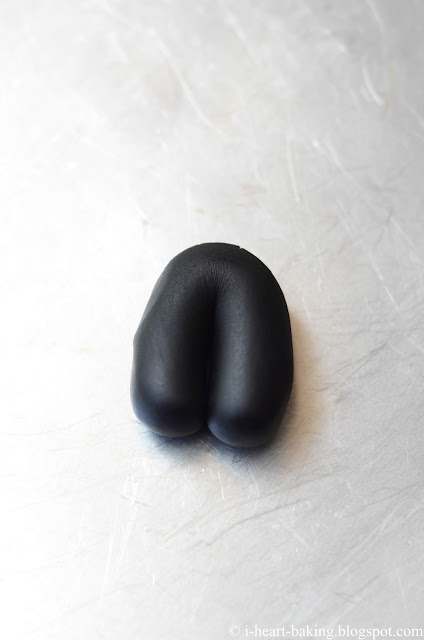 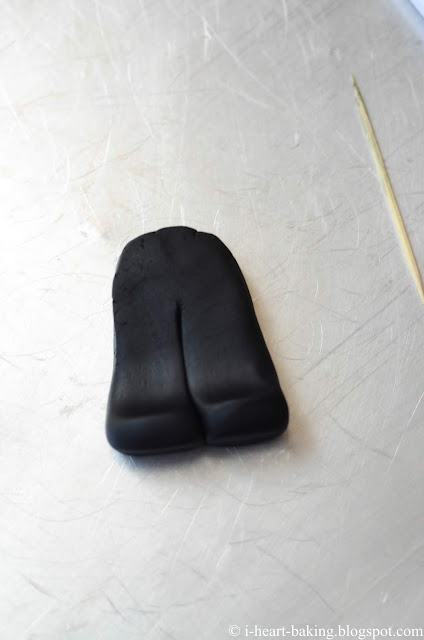 Then I formed all the various body parts - a torso, two arms, and two Lego hands. 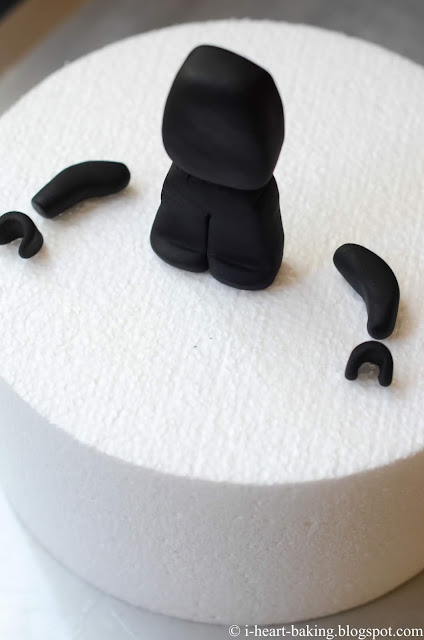 Next, I made a cape, and formed the head and used fondant tools to add the details for the face. 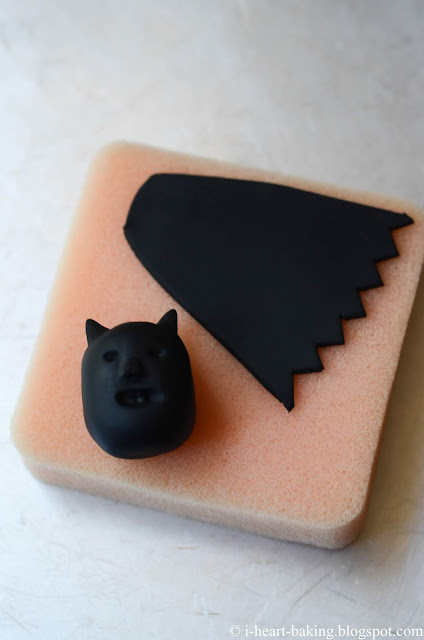 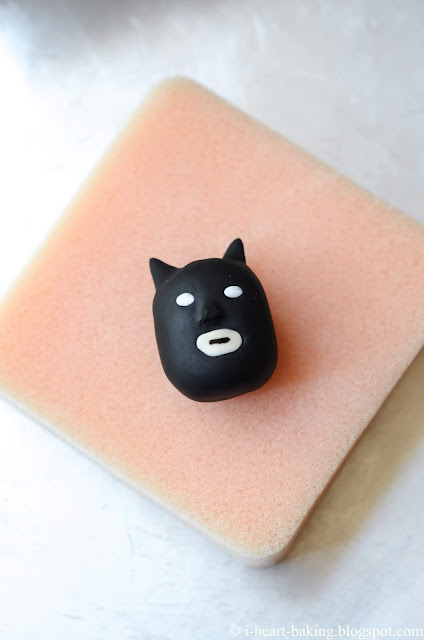 After assembling the body parts using a bit of water applied with a food safe brush, I used yellow fondant to form the belt and the Batman logo. 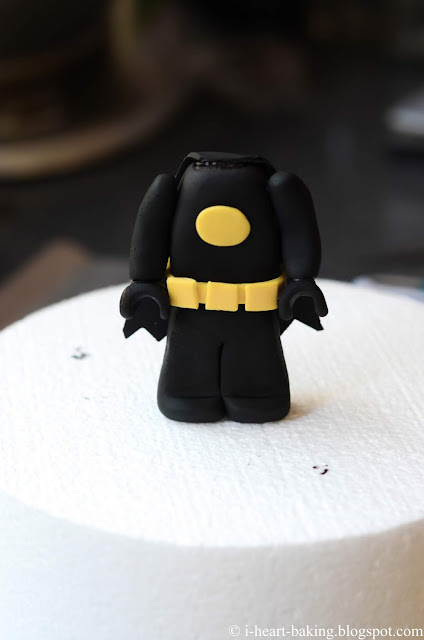 An edible marker worked great for drawing the Batman logo! 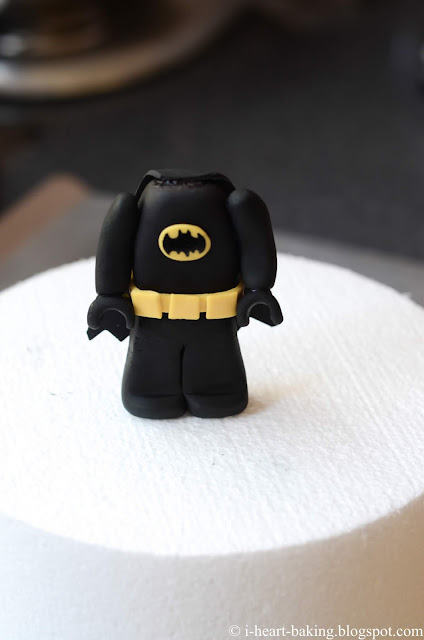 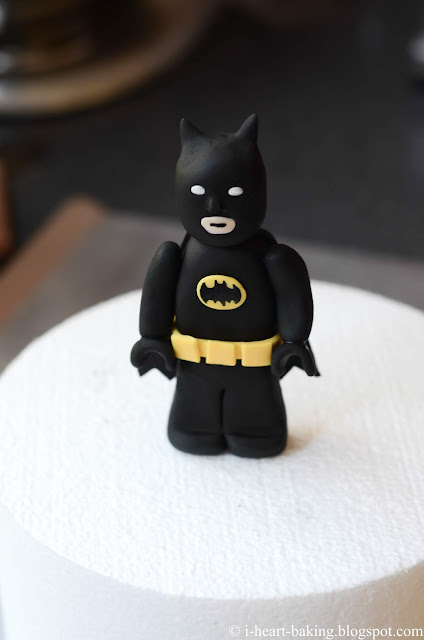 And the final step was attaching the head, secured with a toothpick! Then I let Batman dry out for a week or so. 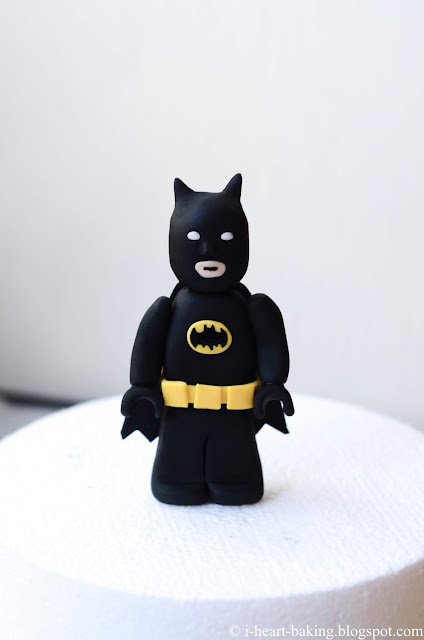 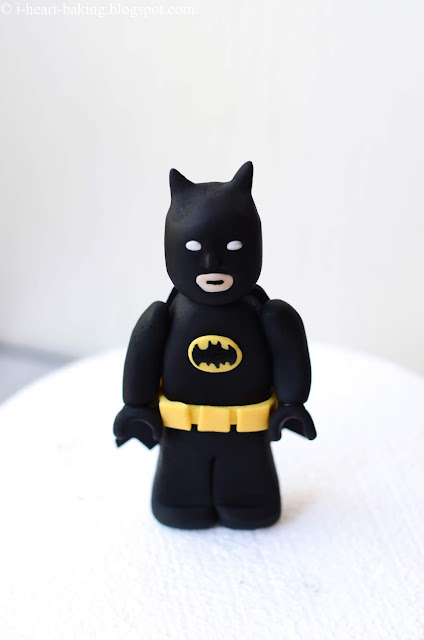 The day before making the cake, I made my chocolate Lego pieces to decorate with. I used this silicone Lego mold to shape my melted chocolate. 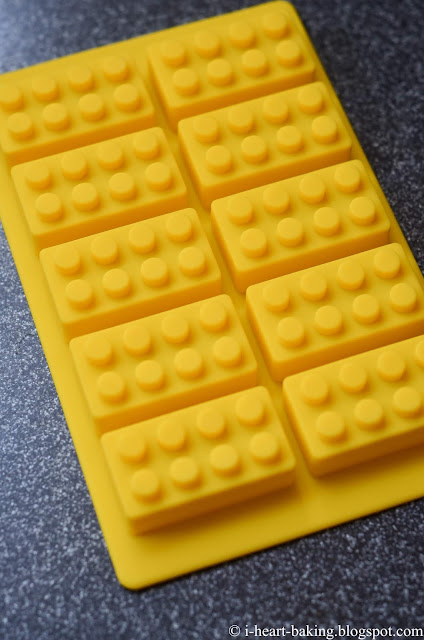 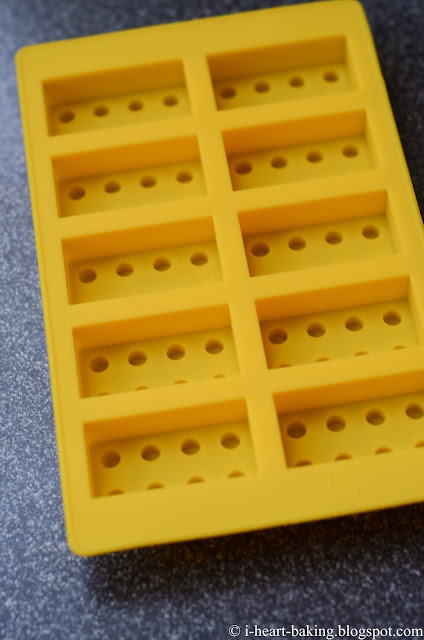 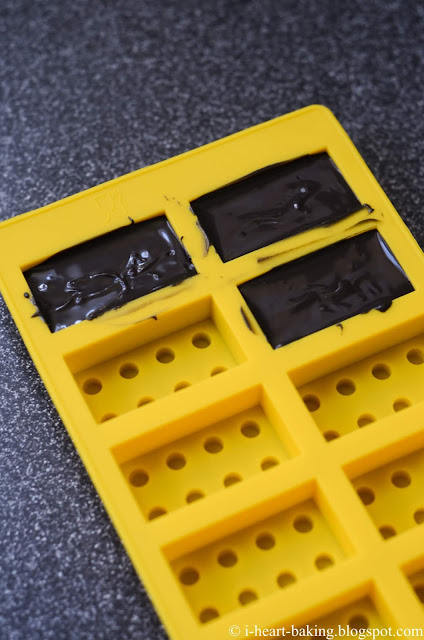 After pouring in my melted chocolate and giving it a few hard taps on the counter to release any air bubbles, I chilled it in the refrigerator for 20 minutes of so, making it super easy to pop them out. Then I stored the chocolate Legos in airtight containers until it was time to decorate. 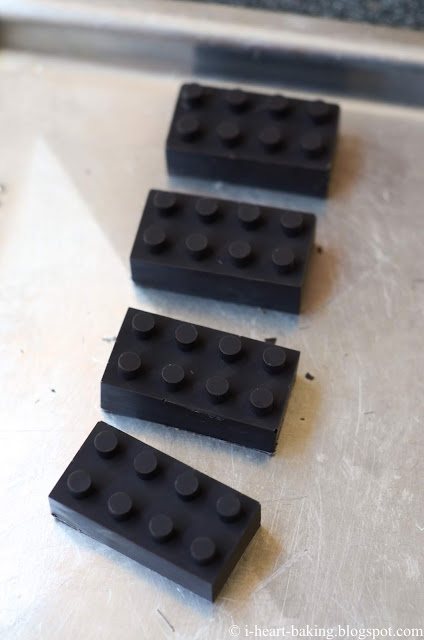 For the cake, I baked up two 10-inch rounds of my favorite vanilla cake (recipe in my book, The Hello Kitty Baking Book! Note that the recipe is for two 8-inch rounds, so to adjust for two 10-inch rounds I used 1.5 batches of the recipe and adjusted the baking time.) Then after letting the cakes cool, I sliced them in half horiztonall to give me four cake layers, and then filled them with freshly whipped cream and sliced strawberries. 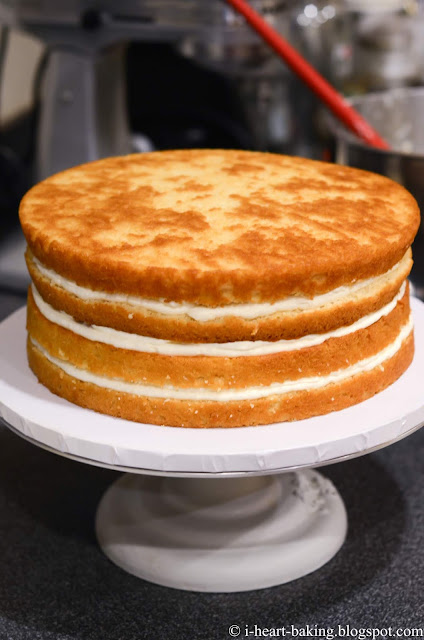 For the frosting, I whipped up two batches of my Swiss Meringue buttercream frosting (recipe also in my book!), covered the top and sides with a quick crumb coat of frosting, and then let it chill for 30 minutes before adding a final smooth layer of frosting. Then I place the entire cake in the refrigerator to chill overnight. 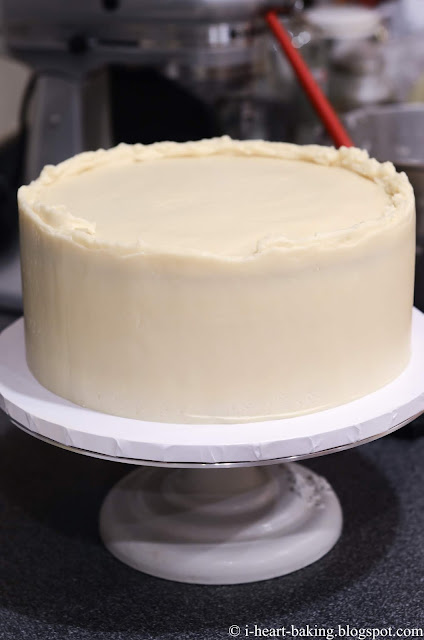 The morning of the party, it was time to decorate! 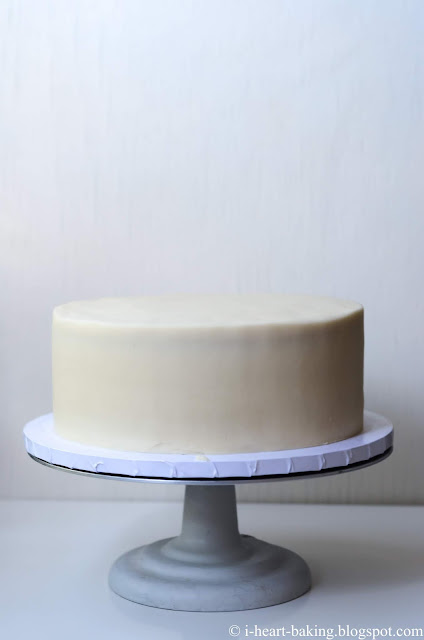 I added my fondant Lego Batman to the top of the cake, secured with a toothpick and a bit of buttercream on the bottom of the topper, and then piped the birthday boy's name on the front of the cake using a small round tip. 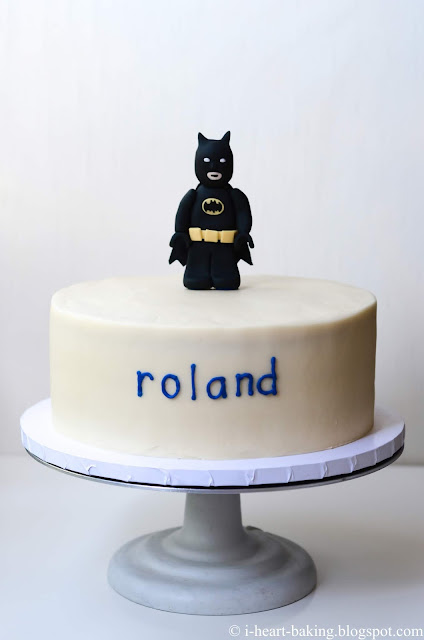 Then it was time to add my chocolate Legos! I used alternating colors, and secured them with a bit of buttercream on the bottom of each chocolate piece. 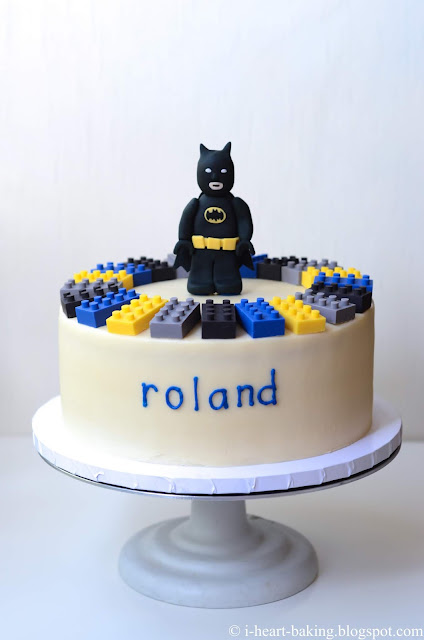 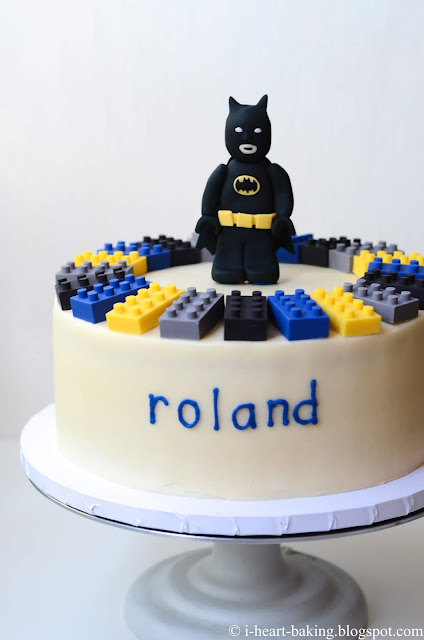 I thought it turned out super cute! 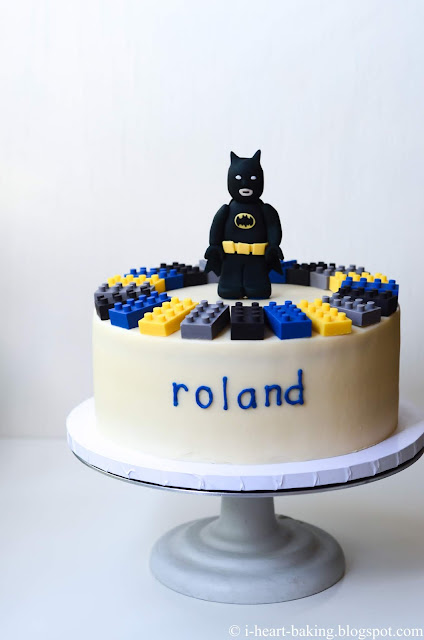 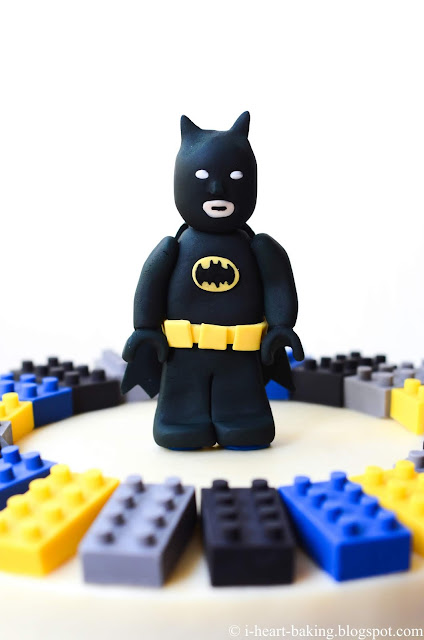 Doan later told me that all of the kids were fighting over the chocolate Lego pieces! ;) 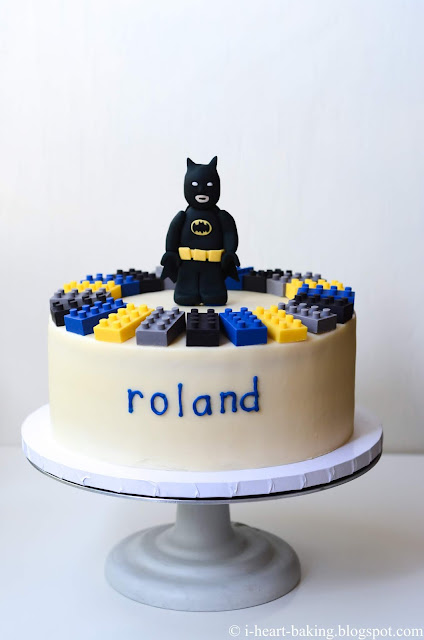 Hope you had a happy birthday, Roland!!! 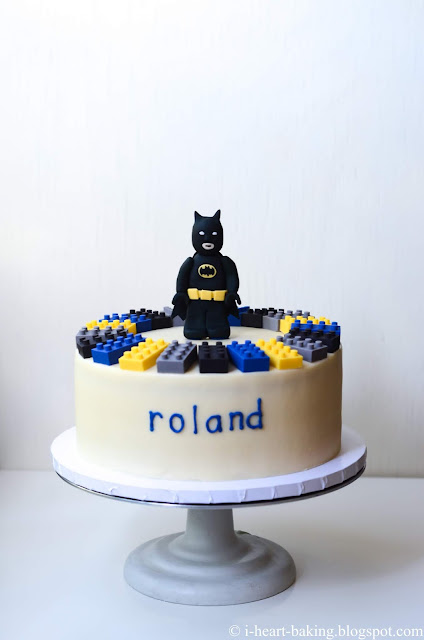 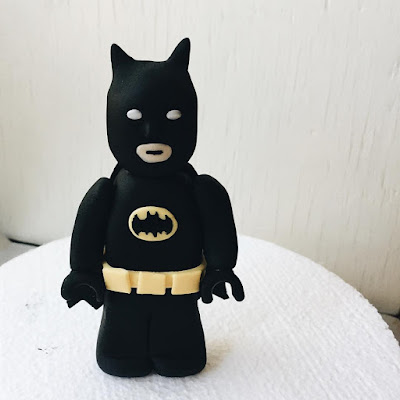