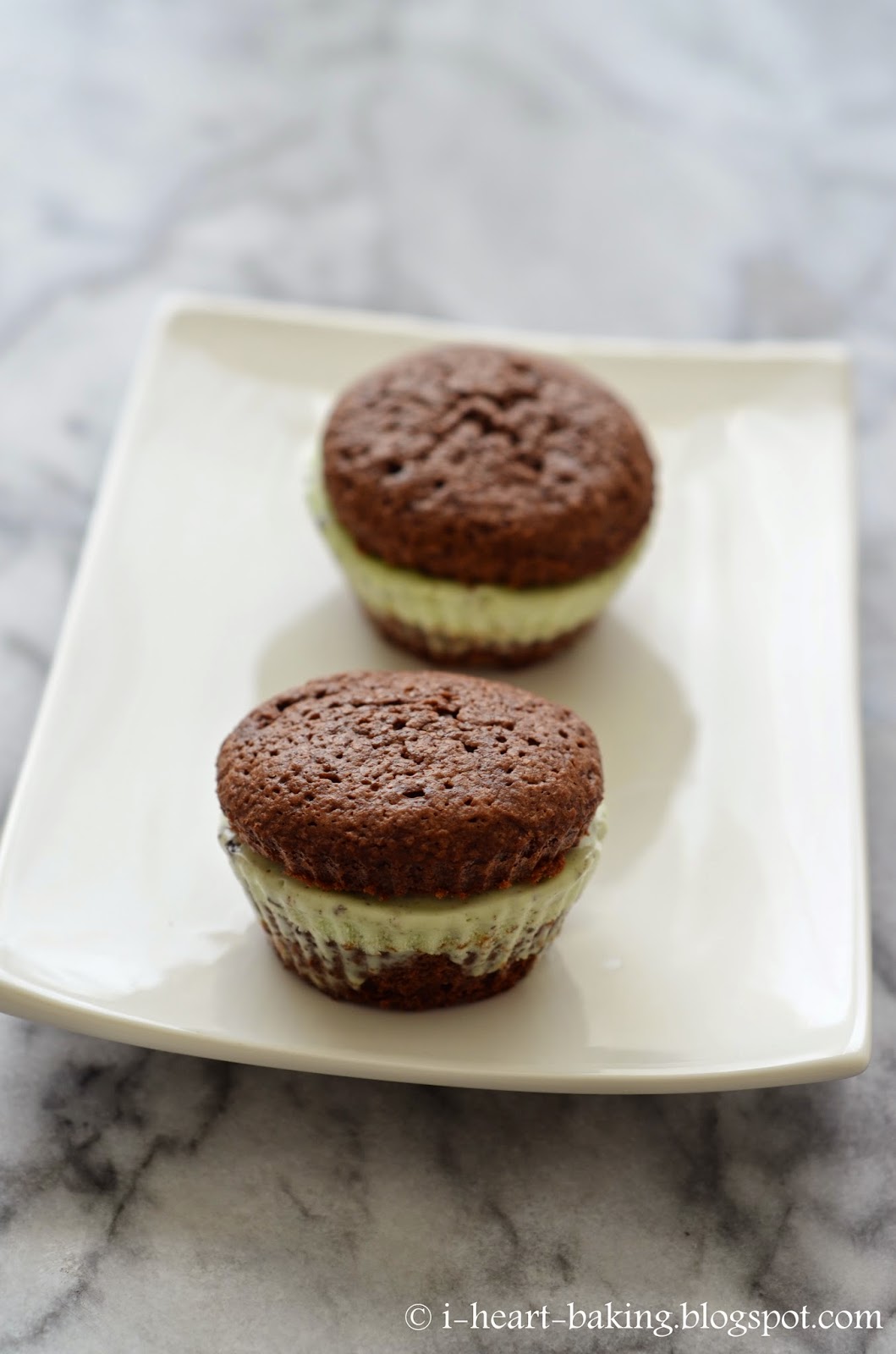 A few weeks ago, I had the chance to review these silicone baking cups by New York Baking Company, and I immediately knew what I wanted to make with them - ice cream sandwiches! That way I could use them both as a baking cup in the oven, as well as a mold for the ice cream in the freezer! I just love dual-purpose things!

I decided I wanted my ice cream to be sandwiched by chocolatey brownies, so I started by using this brownie recipe from Victoria Beckham I had been eyeing. The recipe sounded so easy and it was simple to divide the recipe in half, as I only wanted to make one dozen. (Although on a side note, these turned out not as chocolatey as I wanted. I think paired with the ice cream it was good, but on it's own I like the brownie recipe in my new book better - much more chocolatey and moist! Sorry, Victoria!) Anyway,  I whipped a half batch up, lined my cupcake tin with the silicone baking cups (although they seem sturdy enough to be able to be used without a baking tin and just directly on a sheet pan), and divided the batter into my cups (I ended up filling them a litle less than 3/4 full). Then I baked them at 350F for about 20-22 minutes. Once cooled, I was able to pop the brownies right out of the silicone baking cups! 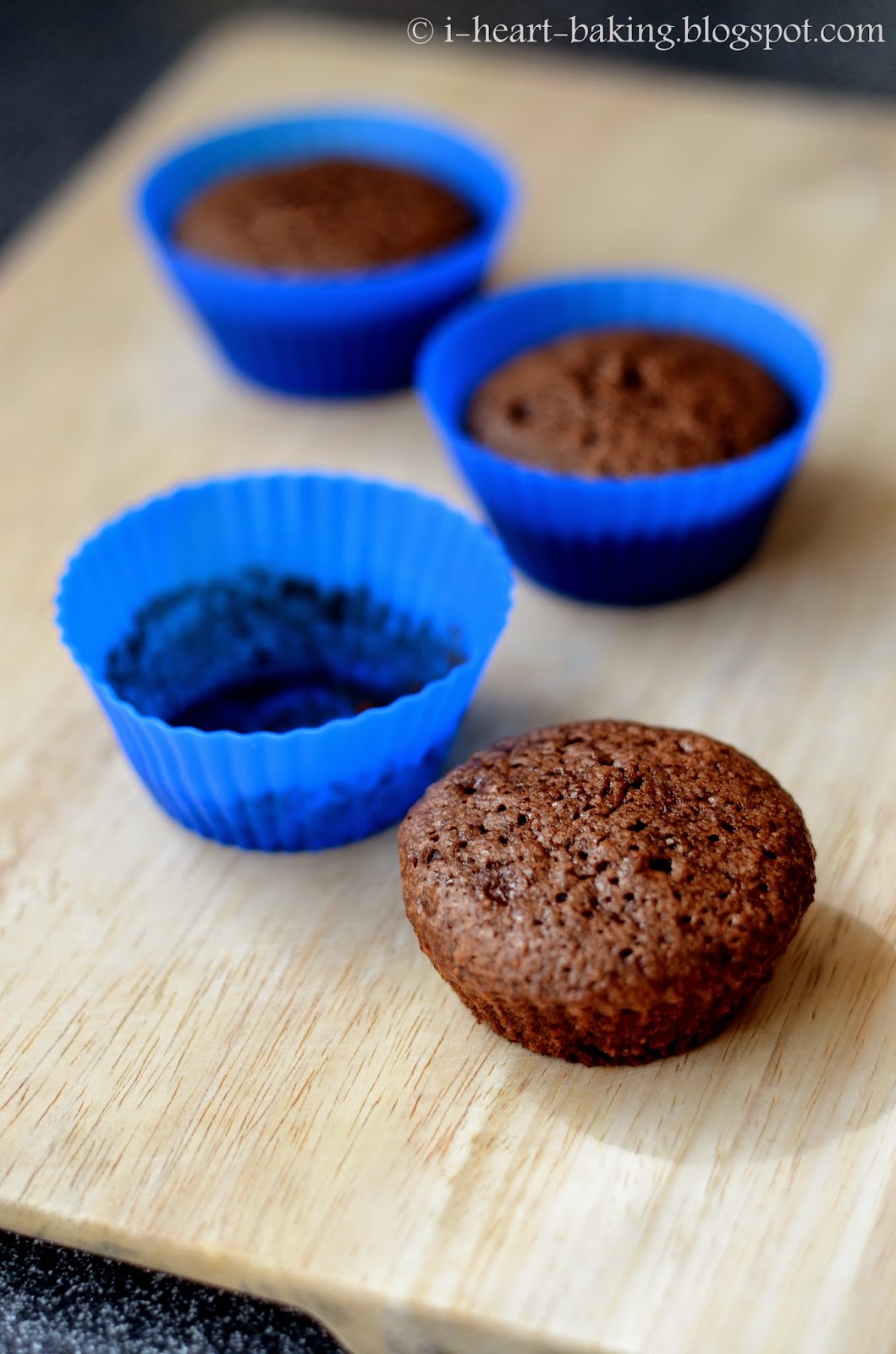 Then I cut each brownie in half horizontally, and popped the bottom layer back into the silicone baking cup. 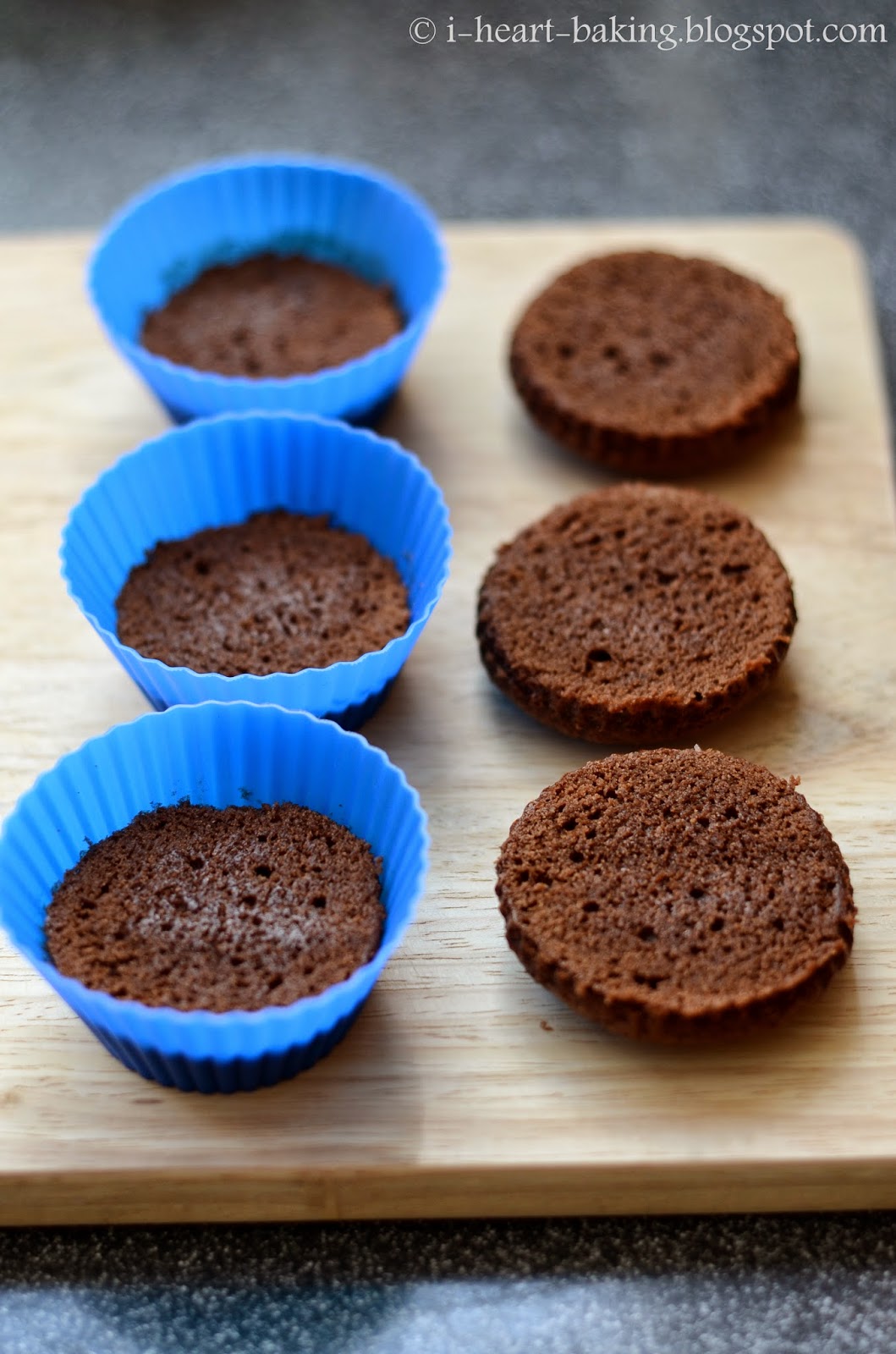 Next I placed a scoop of softened homemade mint oreo ice cream in each cup (you could of course use store-bought ice cream as a shortcut, but I prefer to use homemade ice cream, mainly because I love making it!), and then used a small offset spatula to smooth out the ice cream. 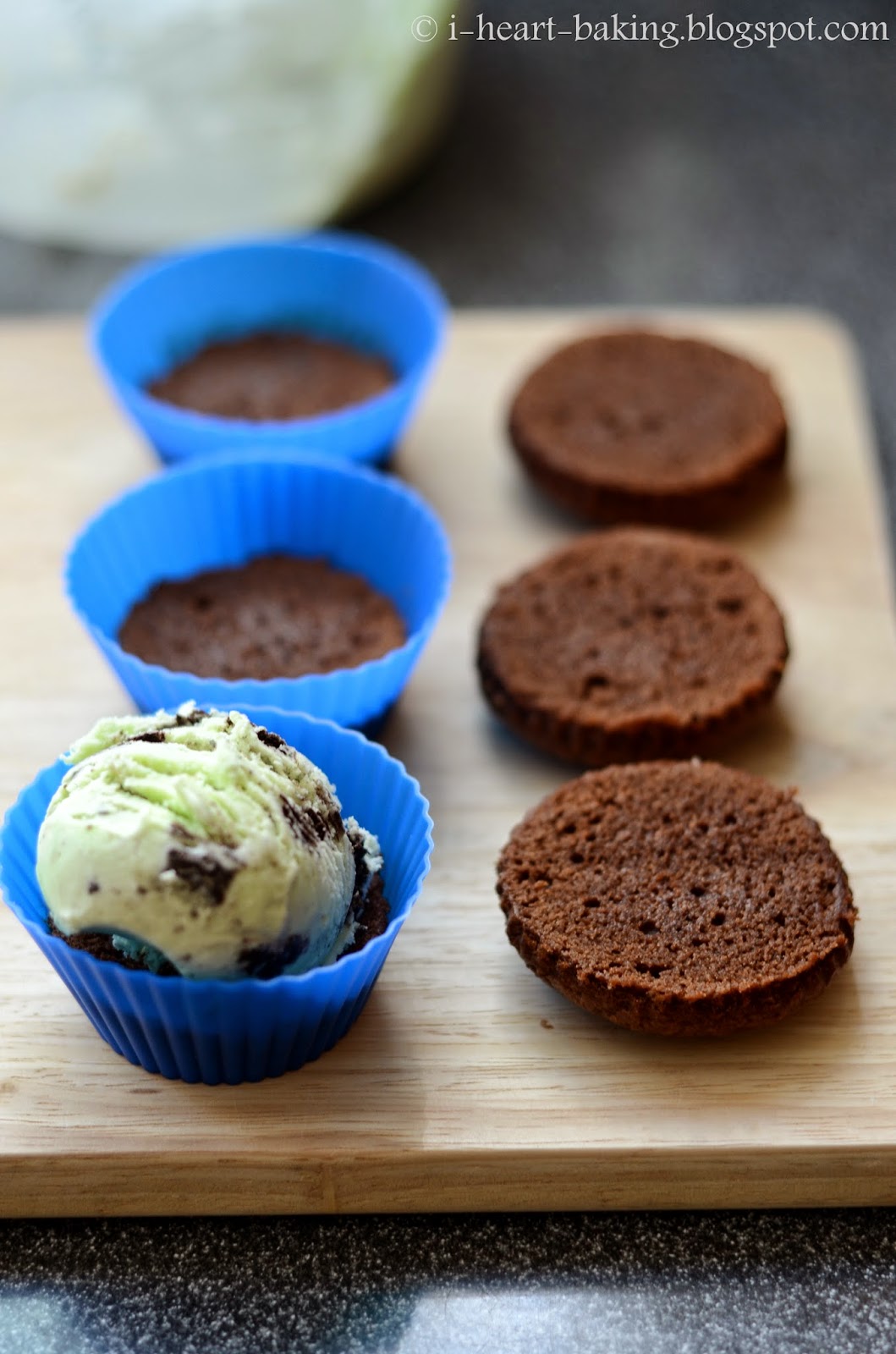 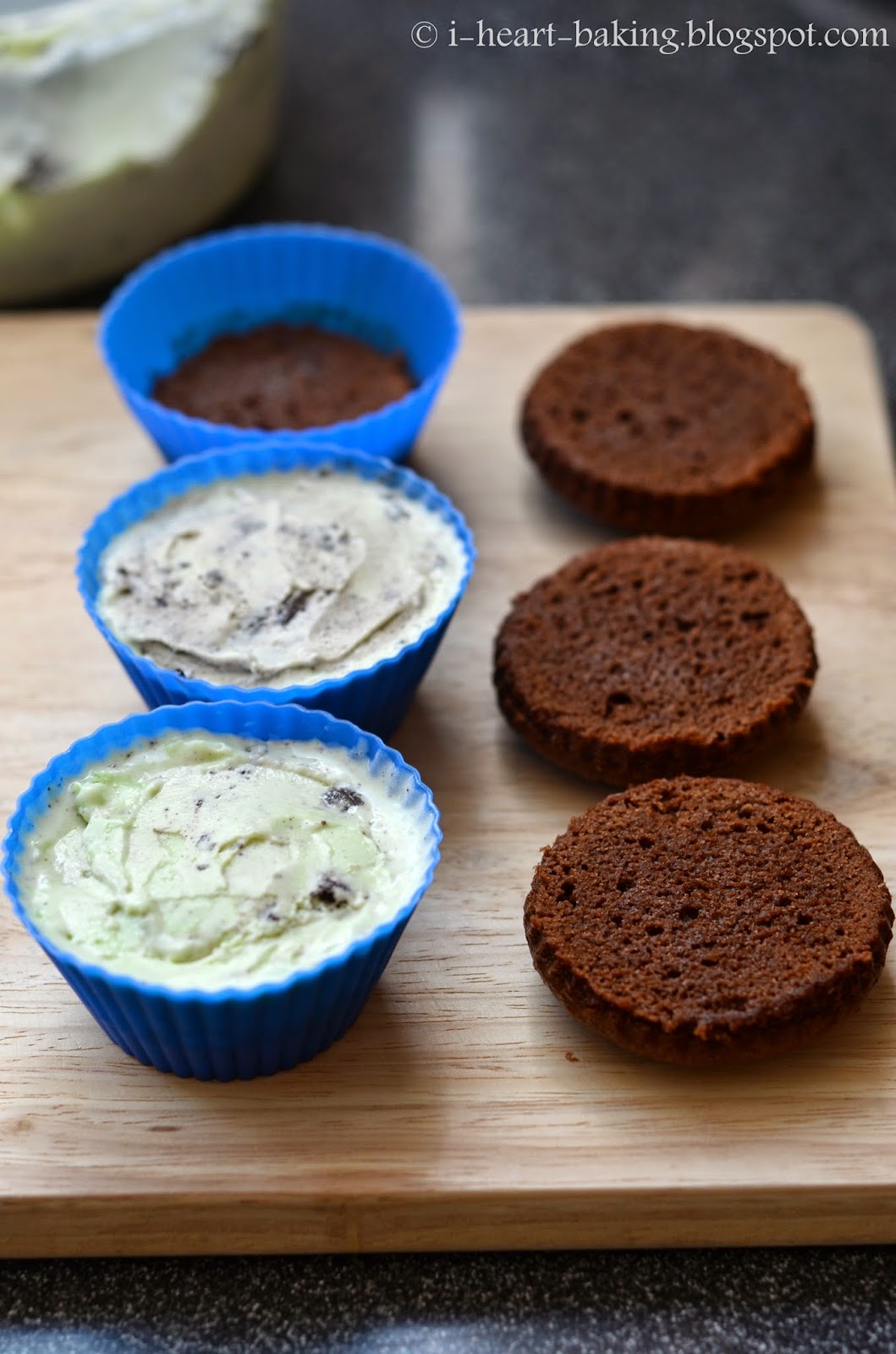 Finally I placed the top of the brownie on top of the ice cream layer, and put it back in the freezer to set! So easy! 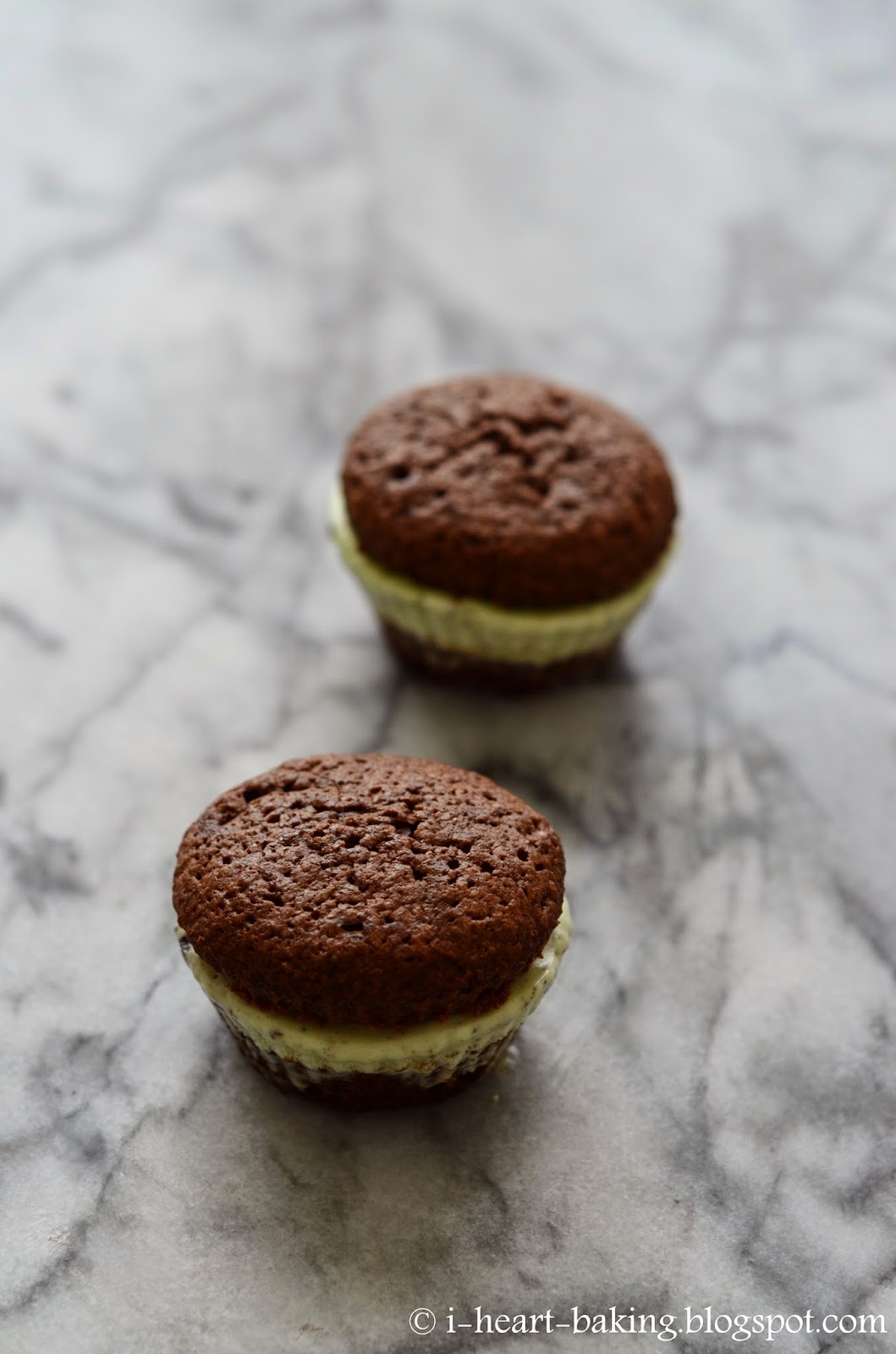 I would recommend serving these the day they are assembled, so that the brownie doesn't get too hard. But if you do leave it for longer than overnight, then before serving just leave them at room temperature for about 10-15 minutes to let the brownie layer soften a bit. Then just pop them out of the silicone cups (I found the easiest way was to turn the cups inside out!) 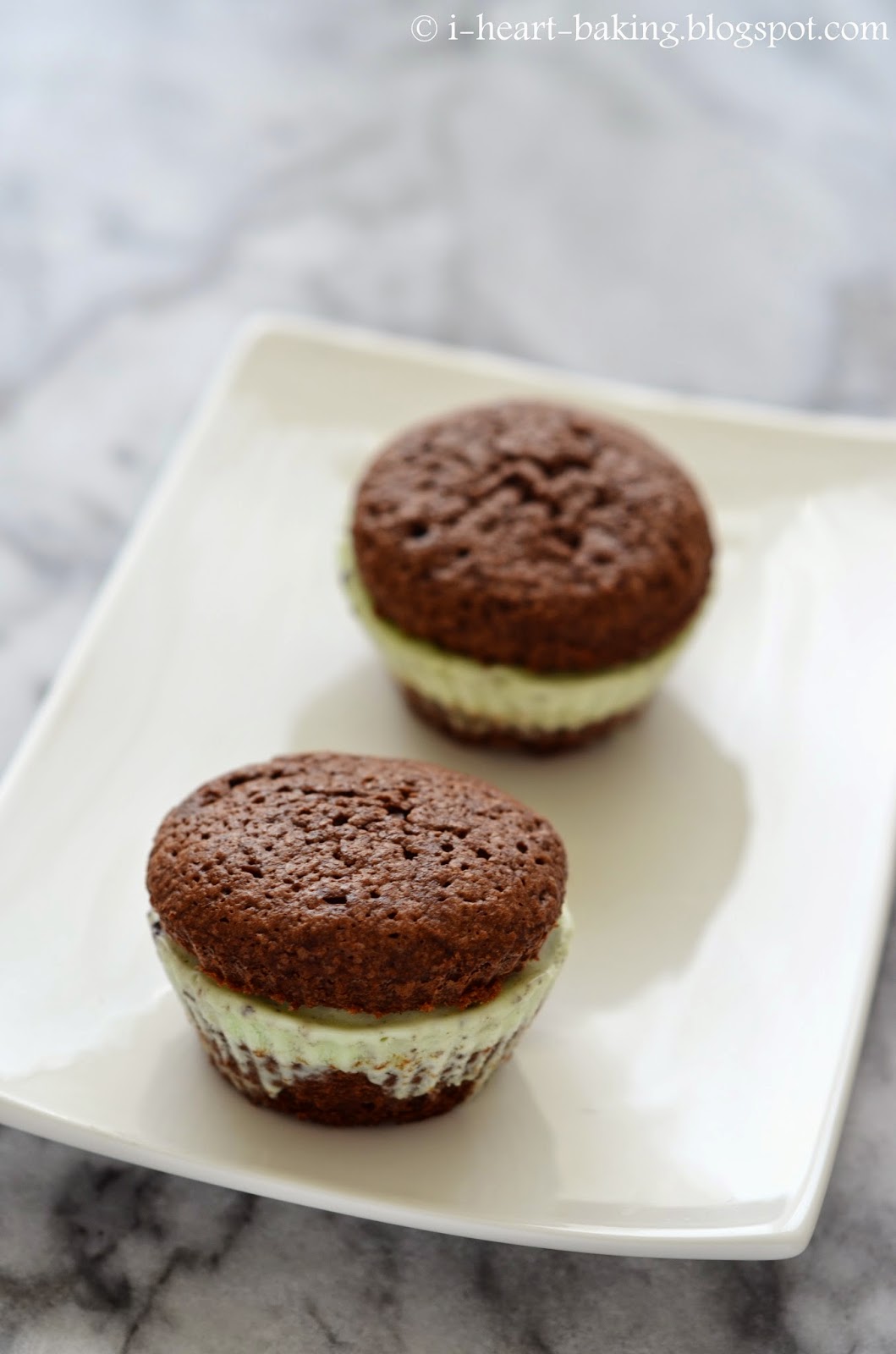 These turned out delicious and were super easy to make! Now if only New York Baking Company would make these in cute patterns or metallic colors! Fun!
Posted by michele at 8:38 PM 1 comments 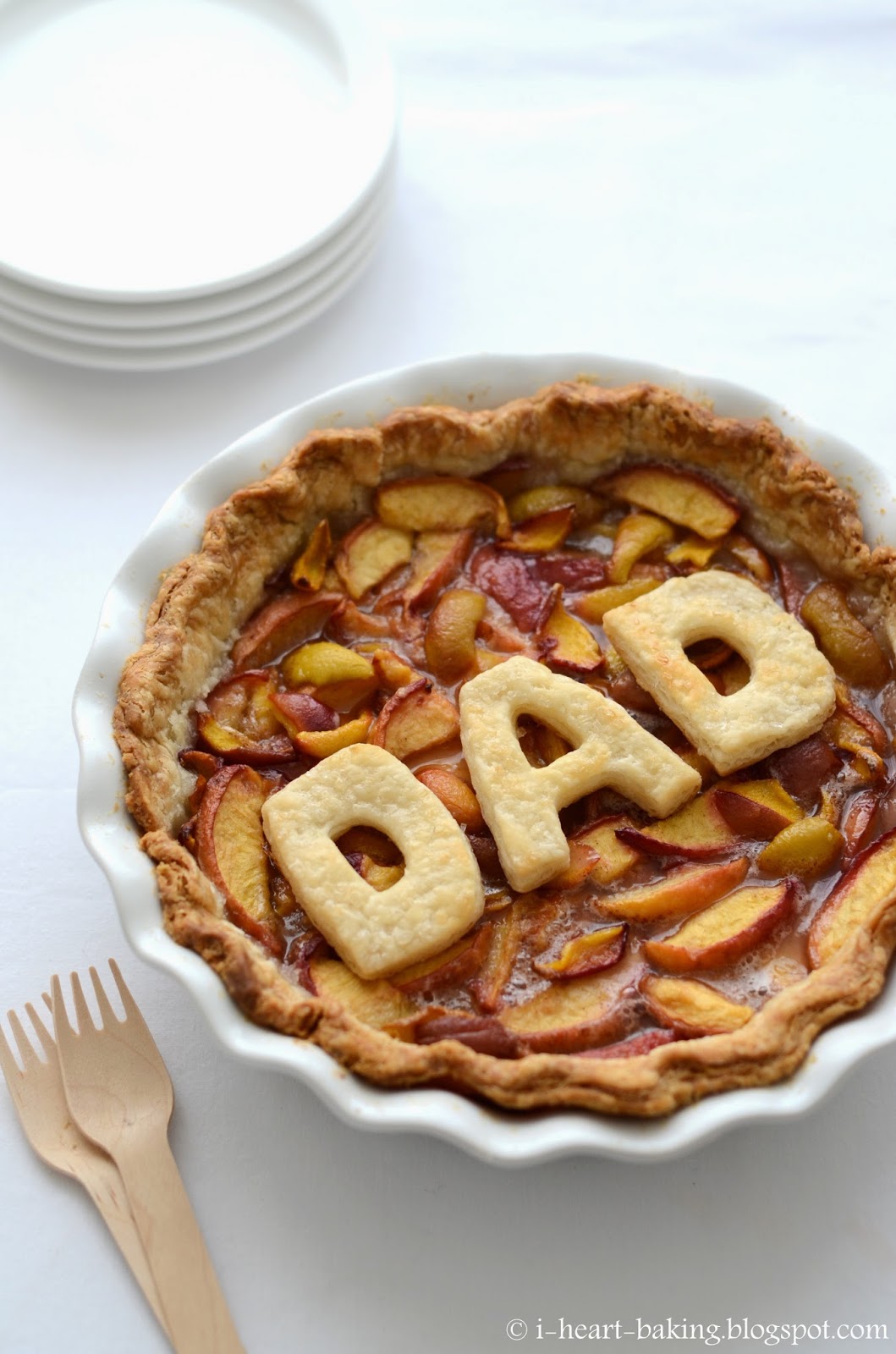 For Father's Day this year, I decided to make a pie instead of a cake, since we had just finished a whole slew of cakes recently (my birthday cake, Mother's Day cake, Grant's birthday cake ...). Since we had fresh peaches in the fridge, and a few baby nectarines on our tree in the backyard, I decided to make peach pie, with pie crust cutouts on top to spell out D-A-D! (If you remember, I had wanted to spell out M-O-M in my Mother's Day cake, but that didn't quite work out). 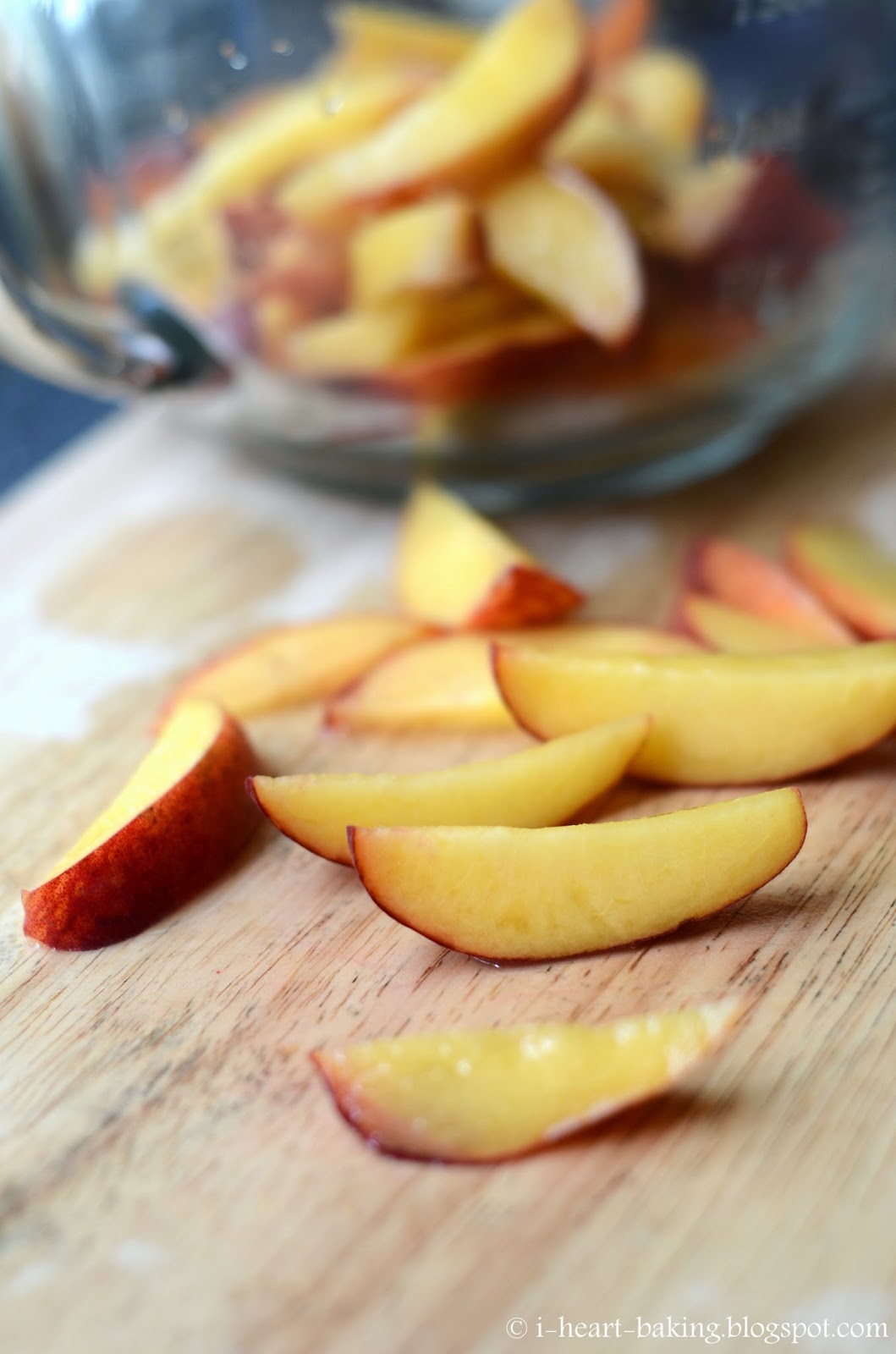 I sliced up my peaches and nectarines, and tossed them with sugar, flour, and a pinch of salt. Then I made my favorite all-butter pie crust recipe, formed it into two round discs, and let them set in the fridge for about half an hour. Once chilled, I took out once disc and rolled it out big enough to fit my pie plate, gently eased my pie crust into my pie plate, and then crimped the sides. 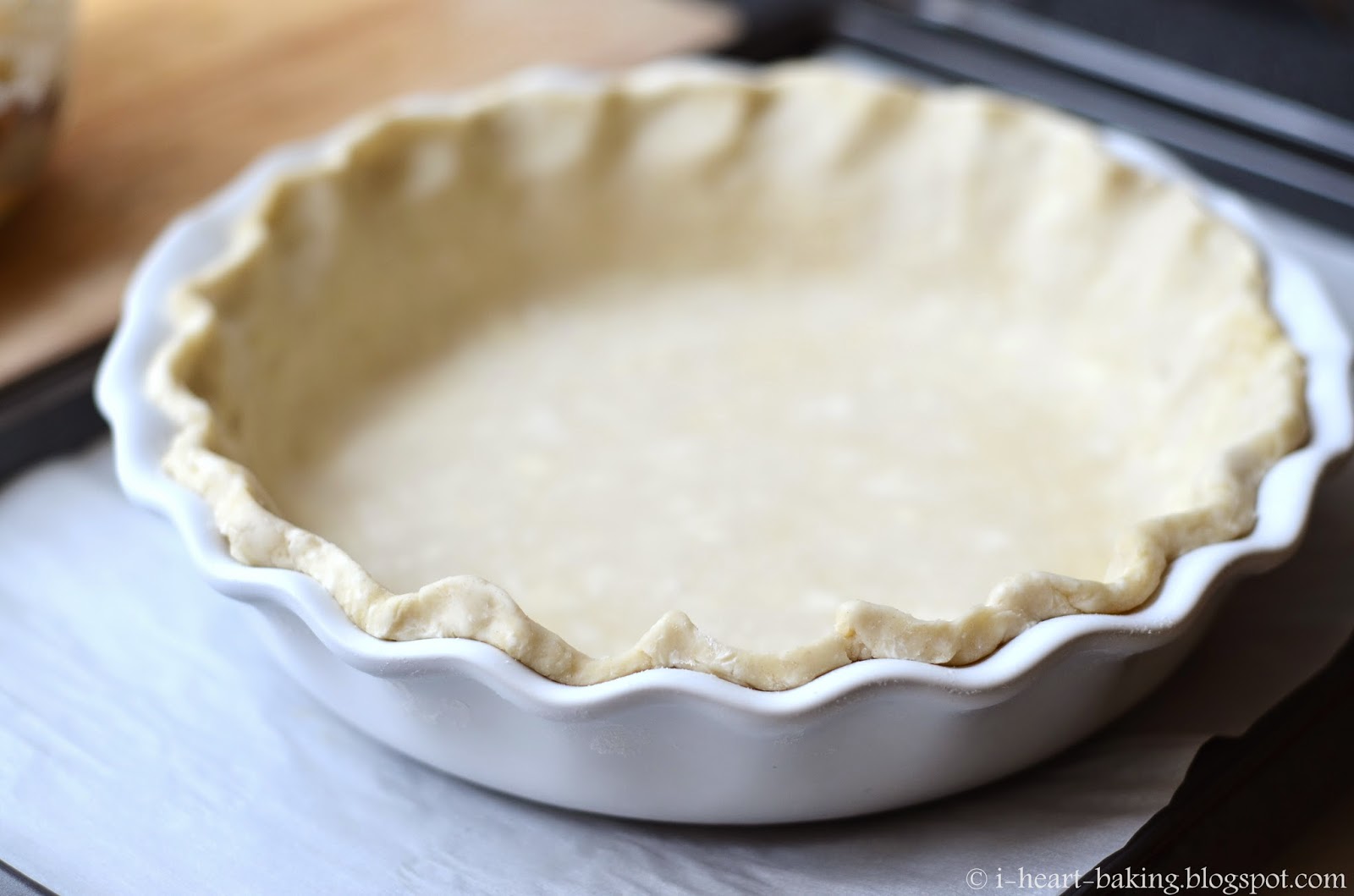 Then I poured in my peach filling mixture. (The little teeny pieces of fruit are the baby nectarines from our tree!) 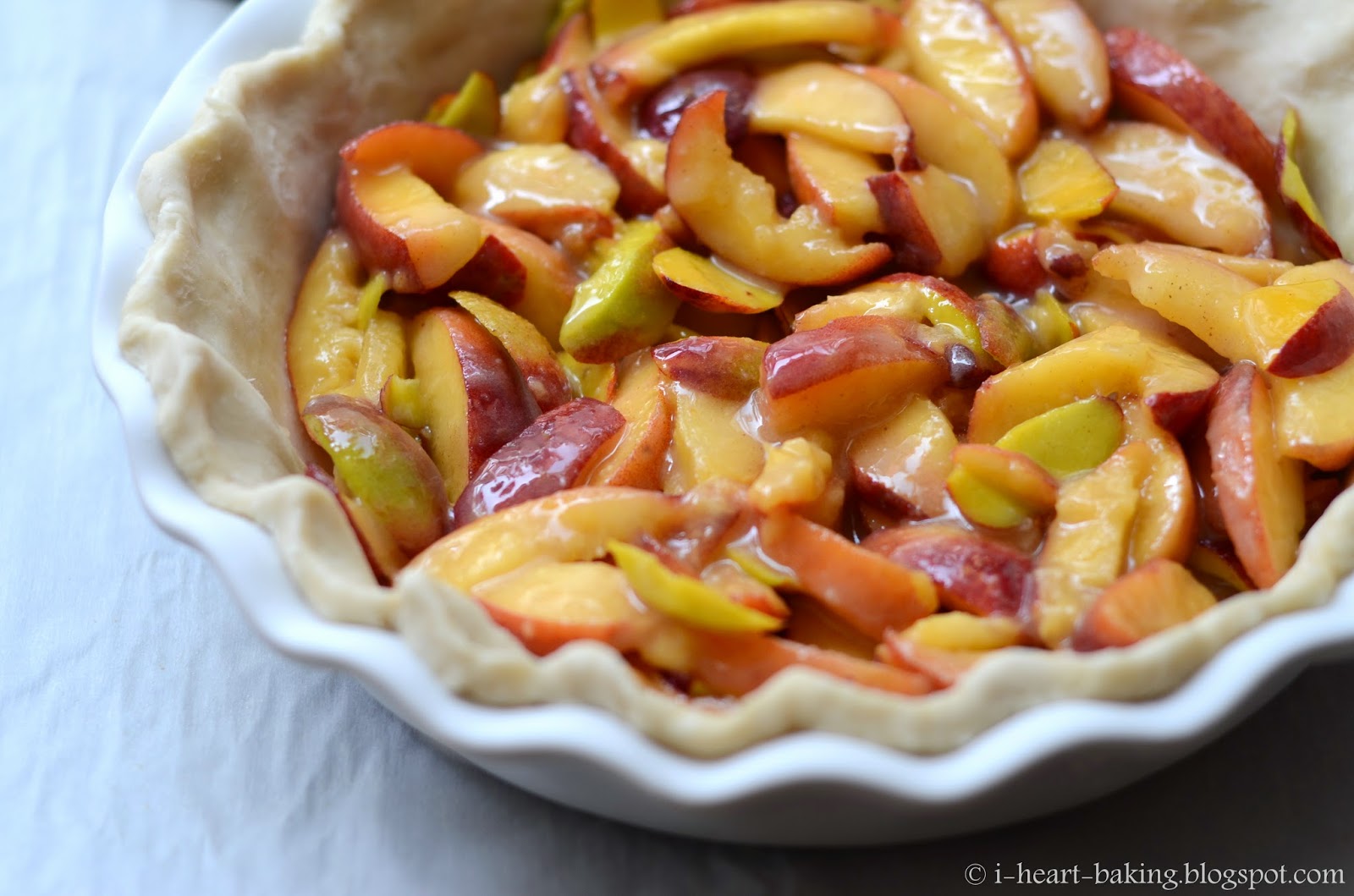 Then I baked it in a 425F oven for about 15 minutes to get the crust going, and then reduced it to 350F to bake for another 45 minutes or so.

Once the pie was done, I took out my second disc of pie crust dough from the fridge, rolled it out, and used alphabet cookie cutters to cut out pieces to spell D-A-D. (I only used less than half of the second disc of dough). Then I sprinkled on some sanding sugar and baked them on a cookie sheet at 375F for 10-15 minutes. 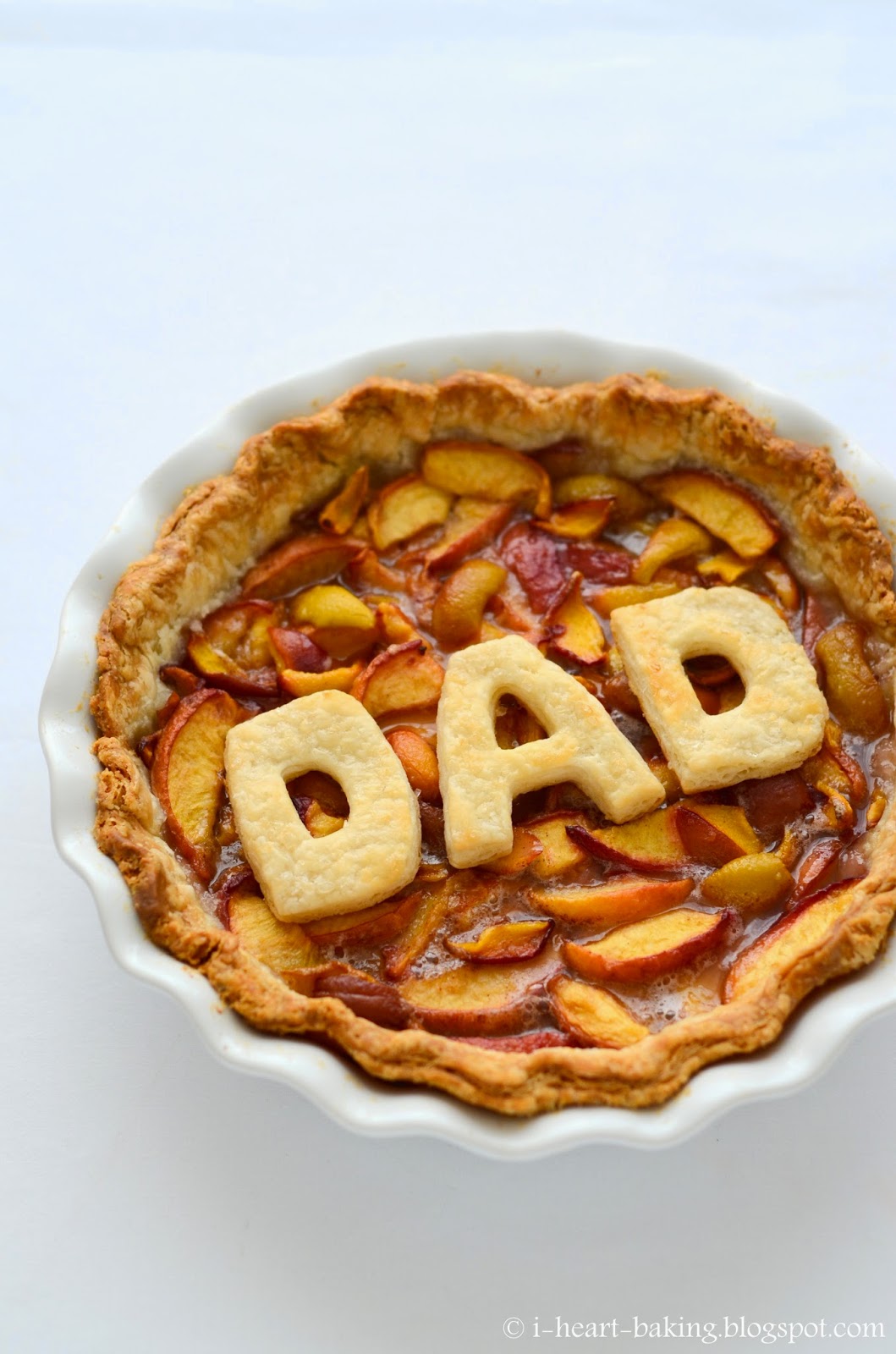 Once the cutouts were done, I placed them on top of the finished pie. (Note: you could also place the pie crust letters on top of the unbaked pie, and then bake the entire thing together, but I find that the cutouts don't retain their shape as well). 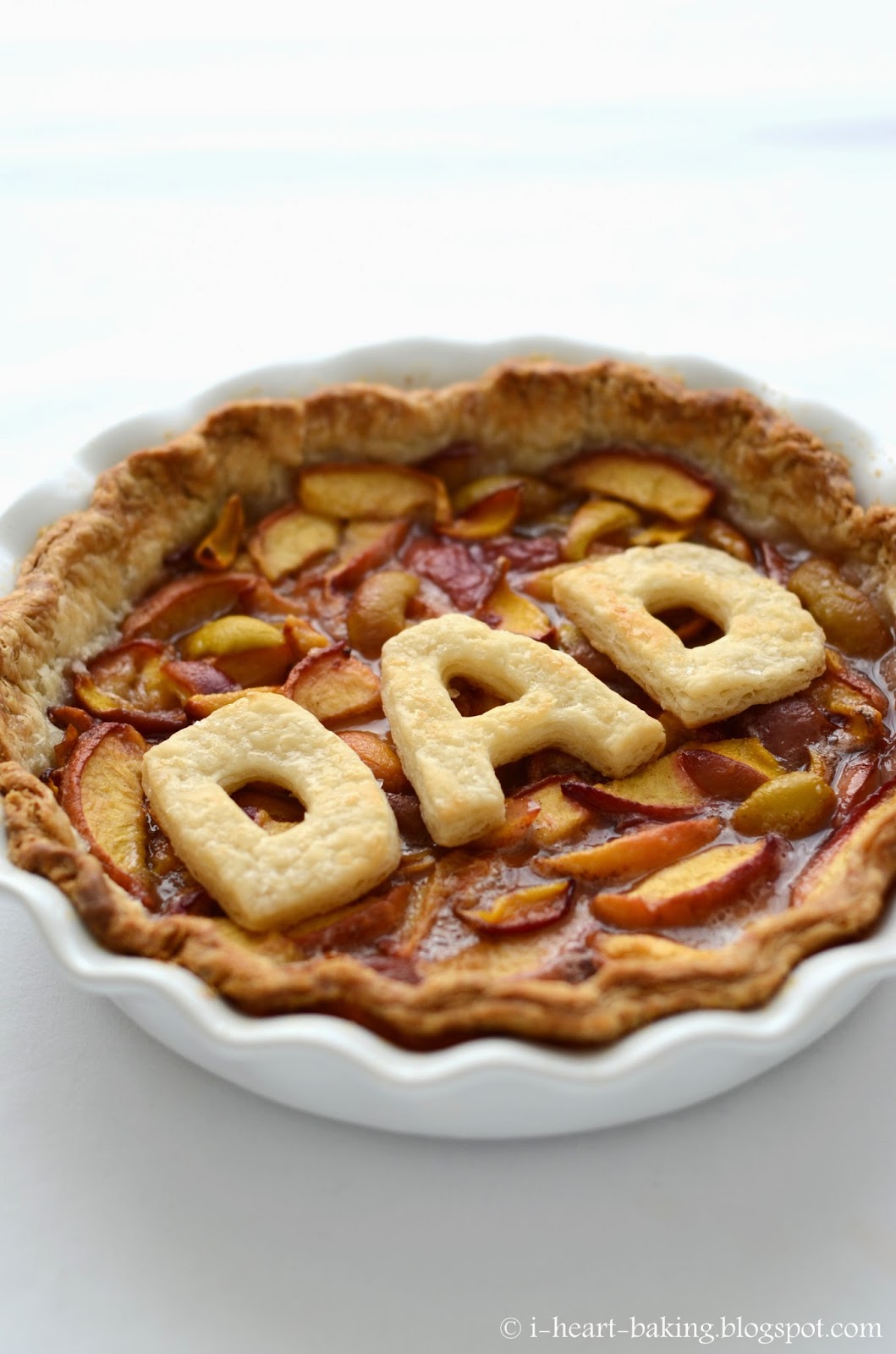 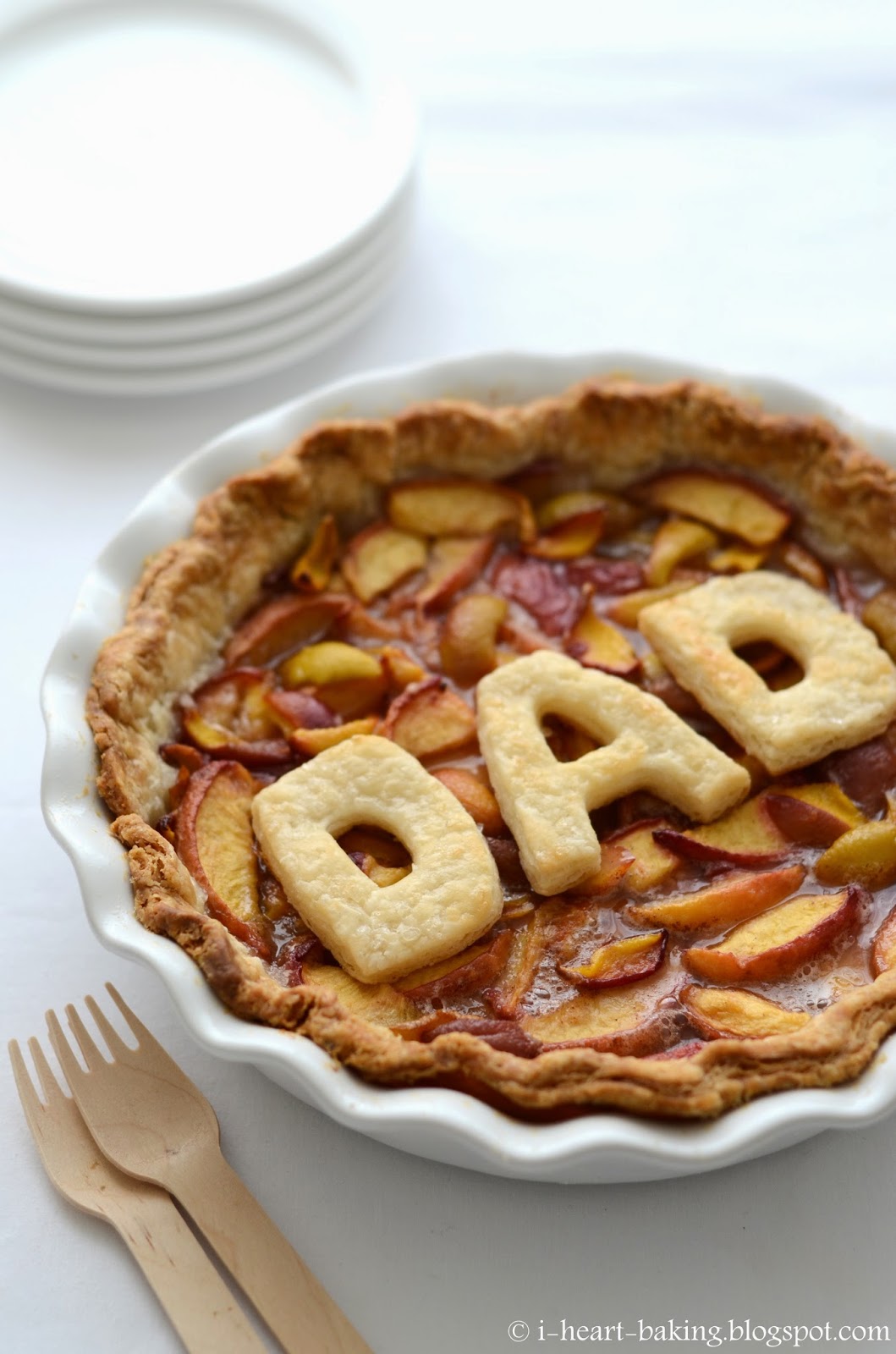 Hope you all had a Happy Father's Day! 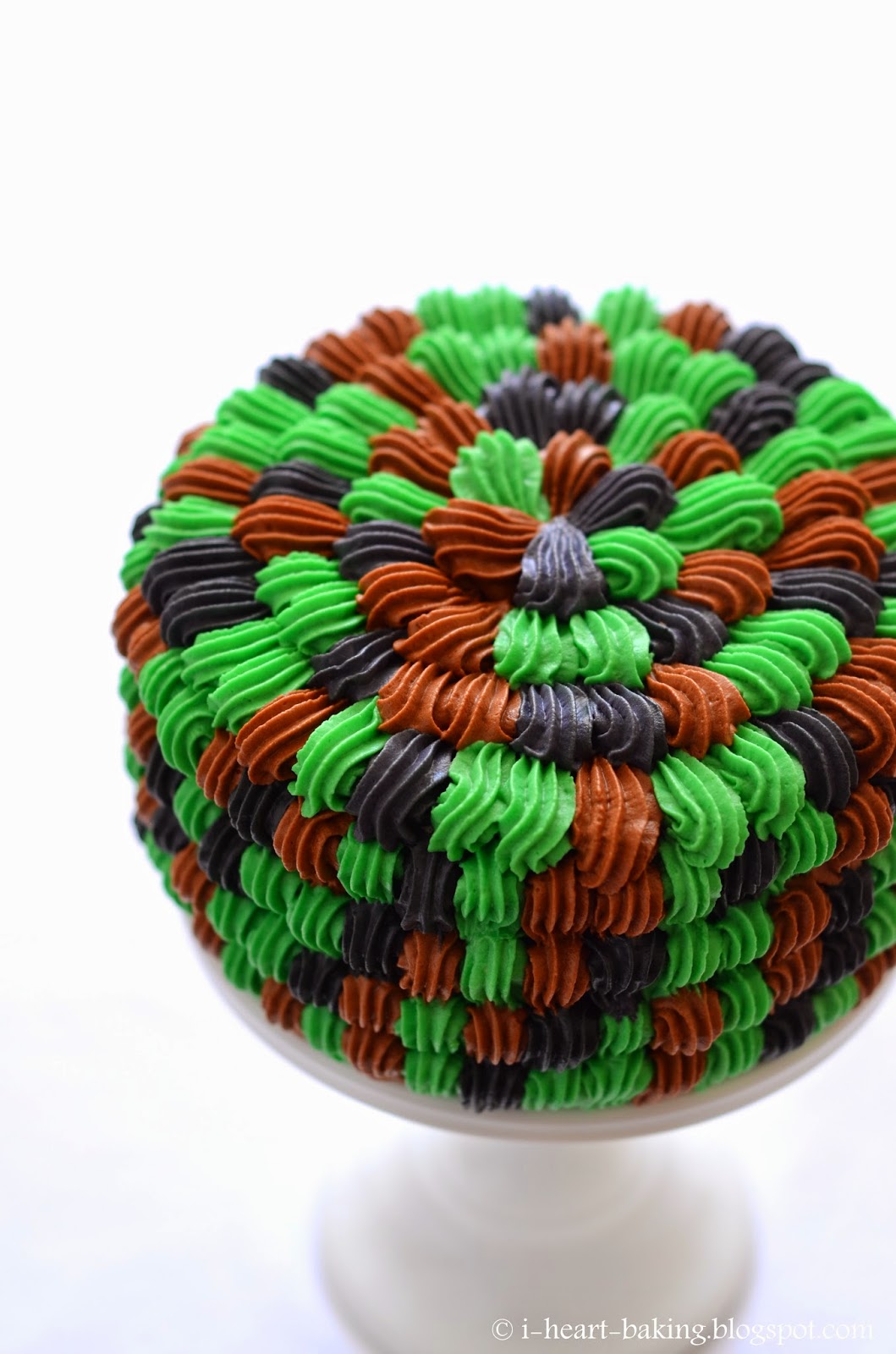 I've been making camourflage cakes for my husband's birthday the past couple of years (see here and here), and this year I intended to make another one! But I was running out of designs! So I took inspiration from the piped shell birthday cake that I made for my youngest baby's first birthday this year, and made camouflage out of different colors of piped shells (except that I piped the shells in a different direction)!

I also wanted camouflage on the inside of the cake this time, so I made half a batch my favorite vanilla cake batter (recipe in my new book!), divided it, and colored the batter green and brown, leaving the third portion white. 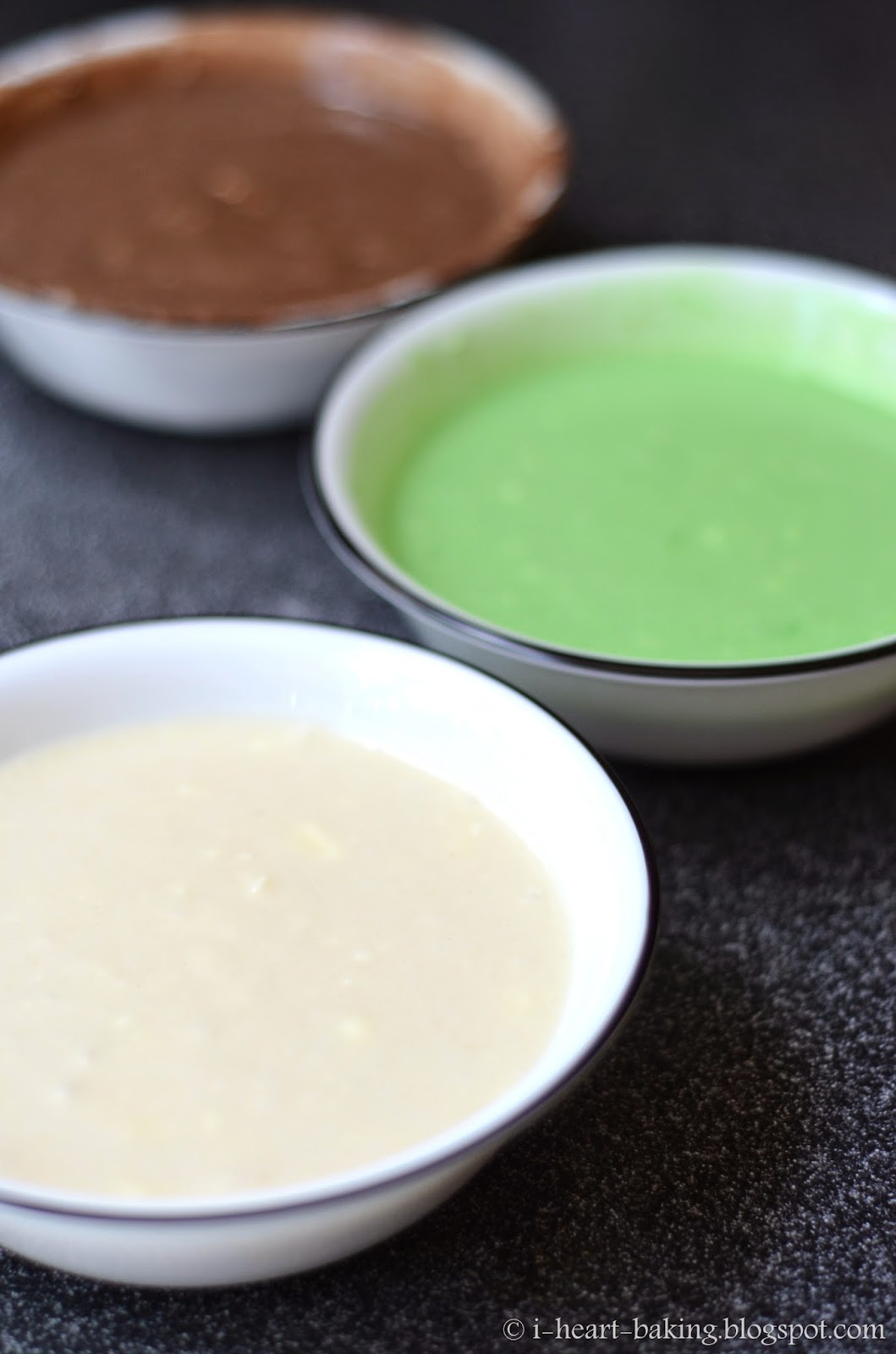 Then I alternated colors when dropping the batter into my 6-inch prepared cake pans. 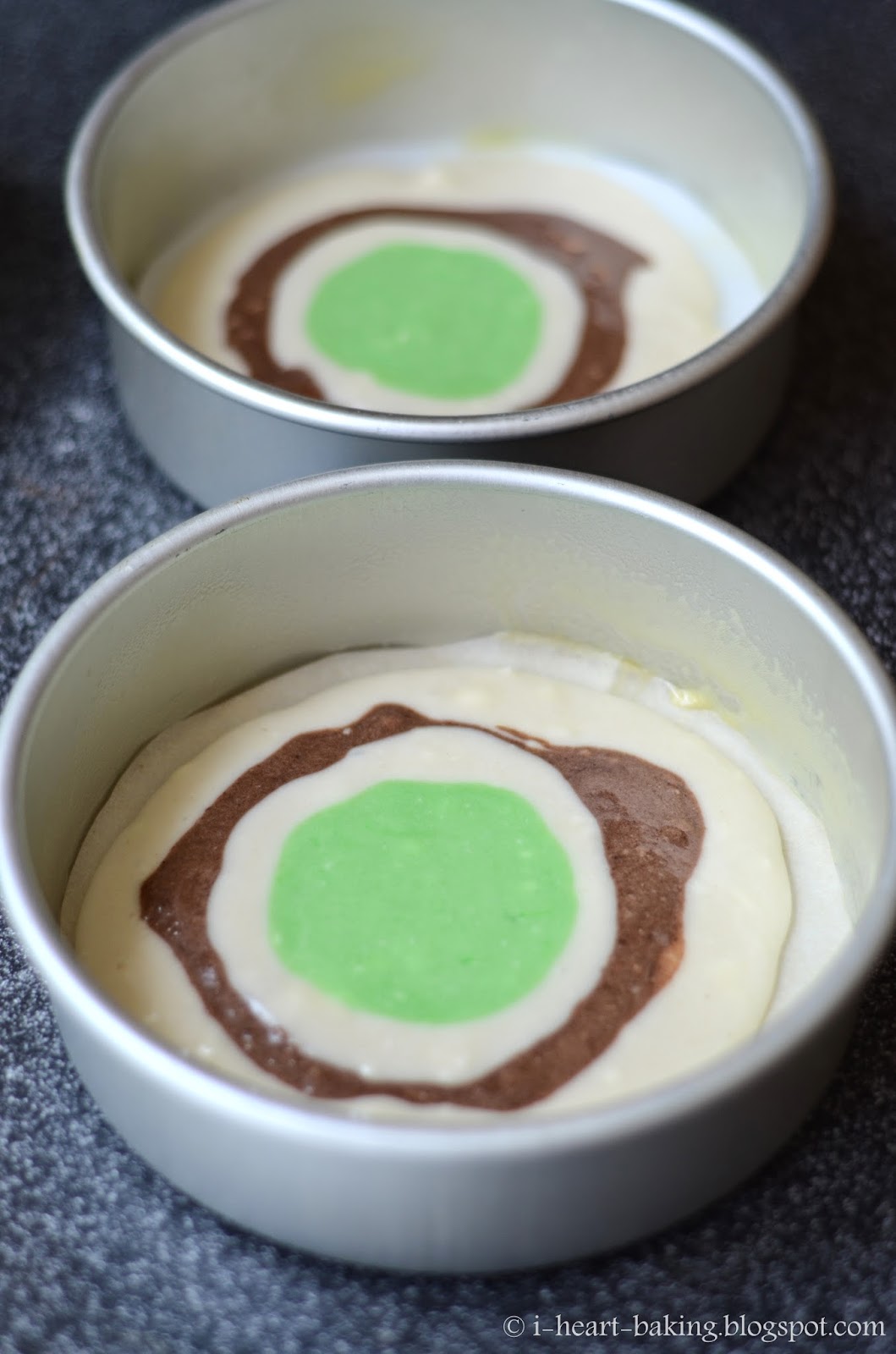 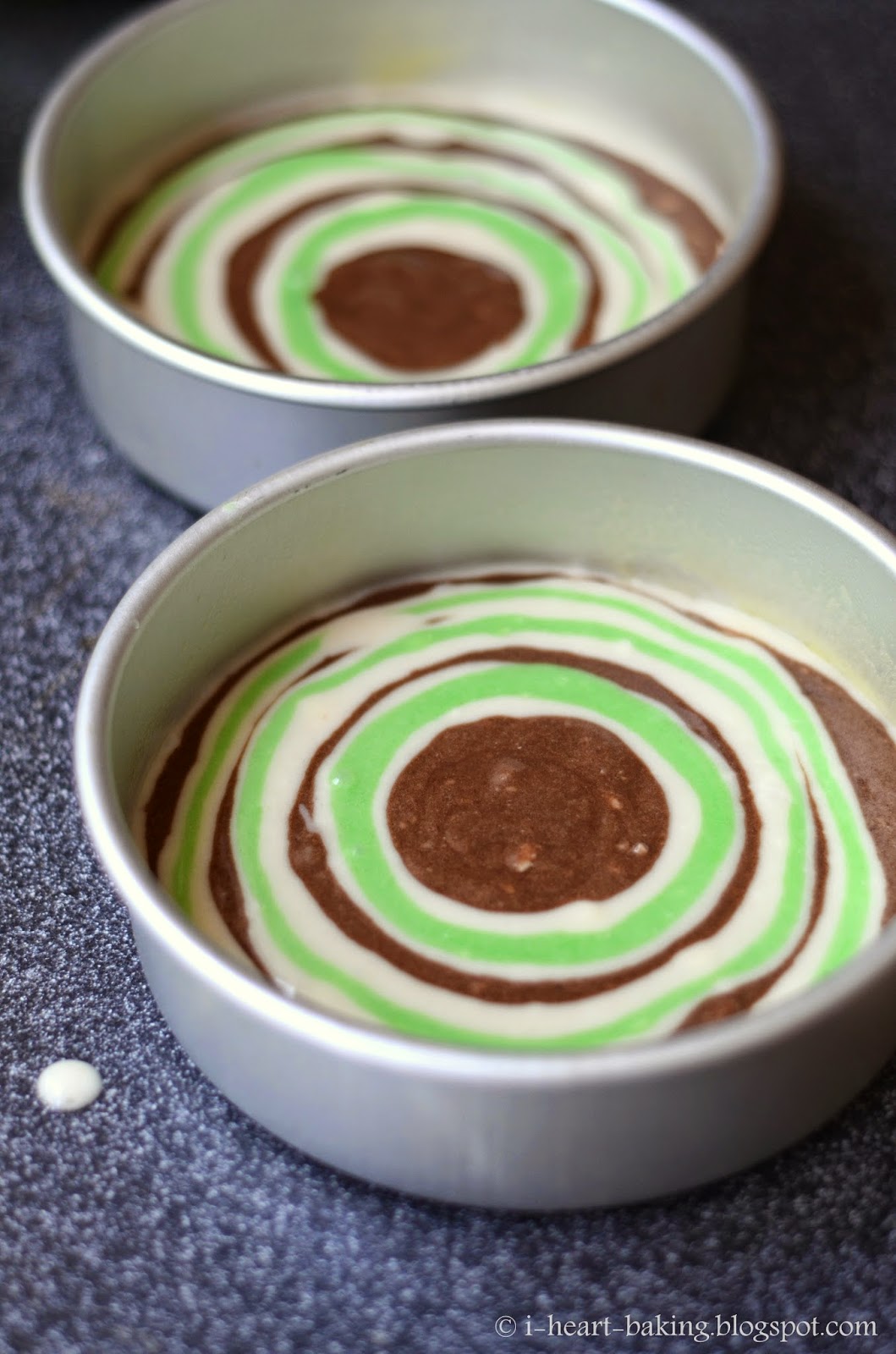 Once baked and cooled, I whipped up a batch of fresh whipped cream (recipe also in my new book!), and piped a layer in between the cakes. 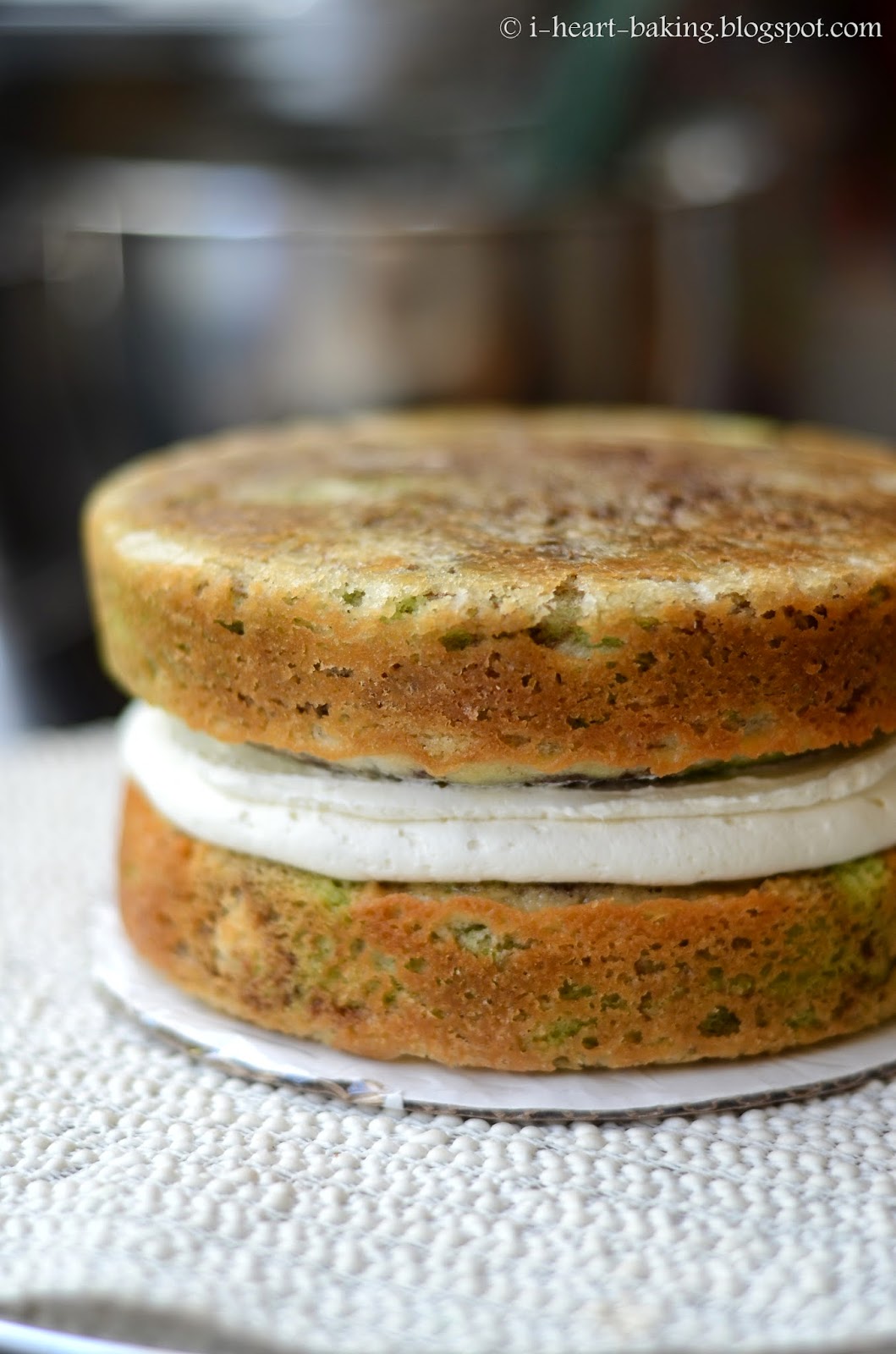 Then I covered the entire top and sides with whipped cream. At this point, it didn't have to be perfectly smooth, as I was going to pipe camouflage shells all over the outside! 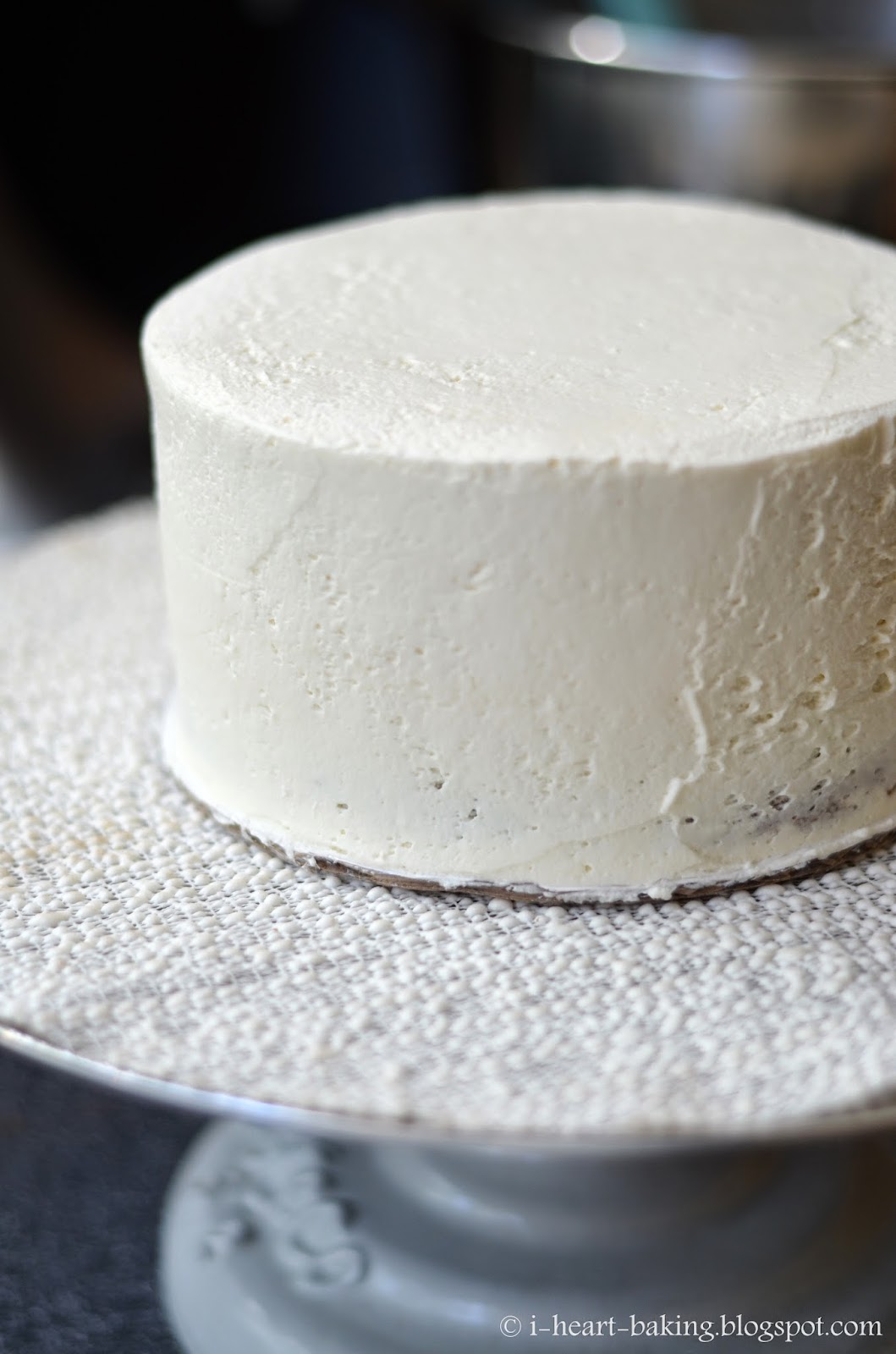 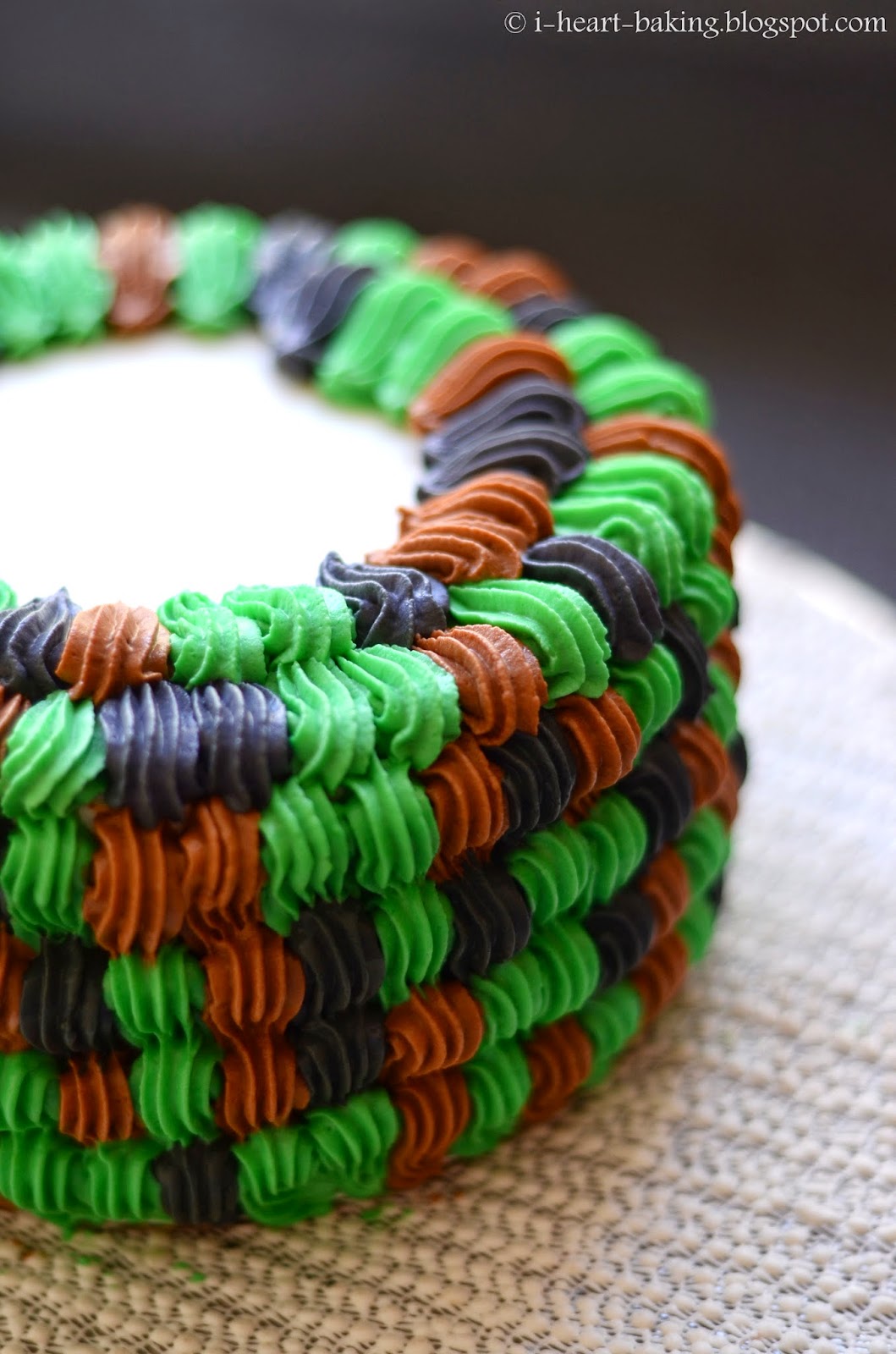 And here's the finished cake! 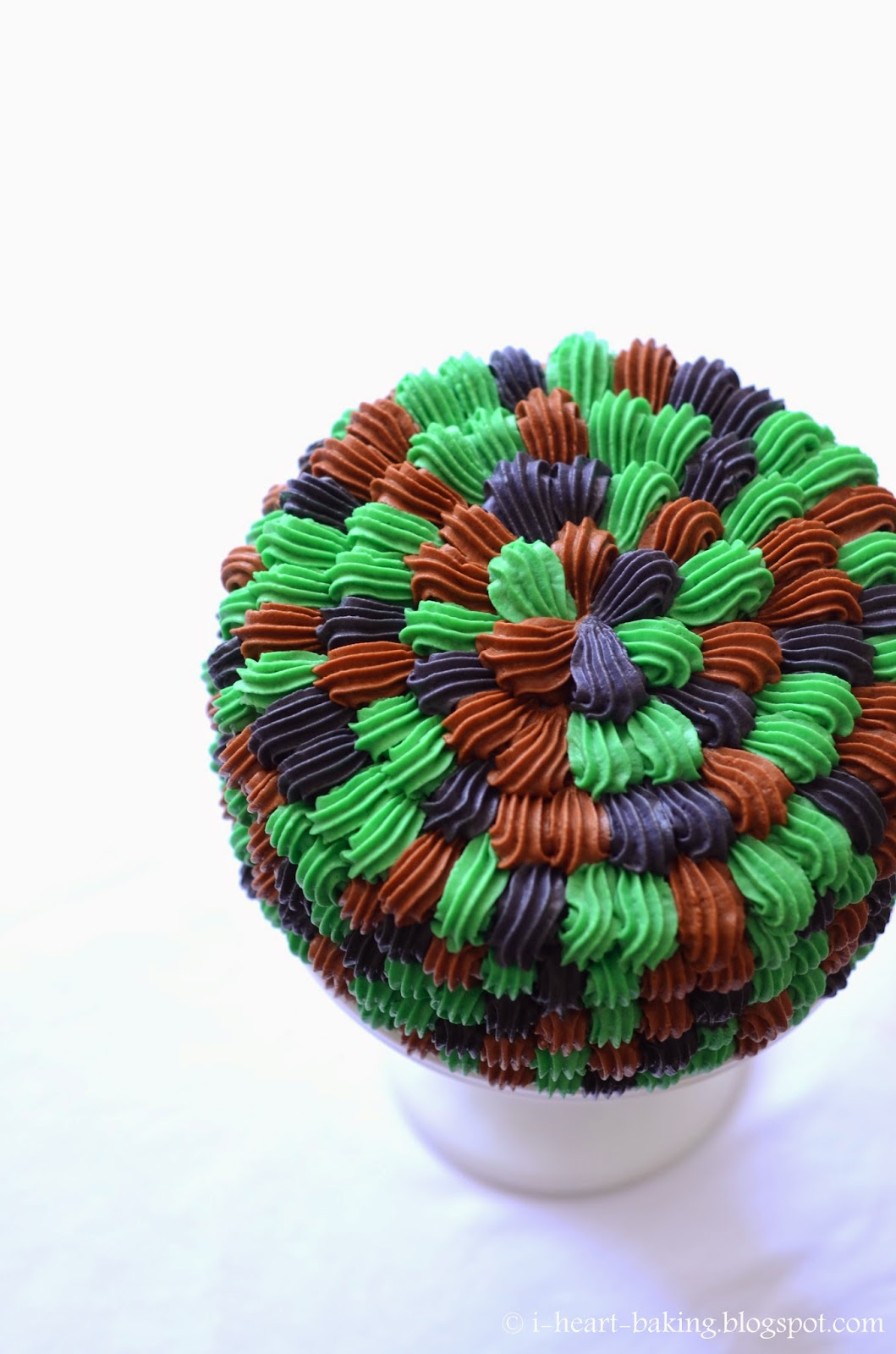 I especially loved the way the top of the cake turns out - the piped shells made a beautiful pattern. 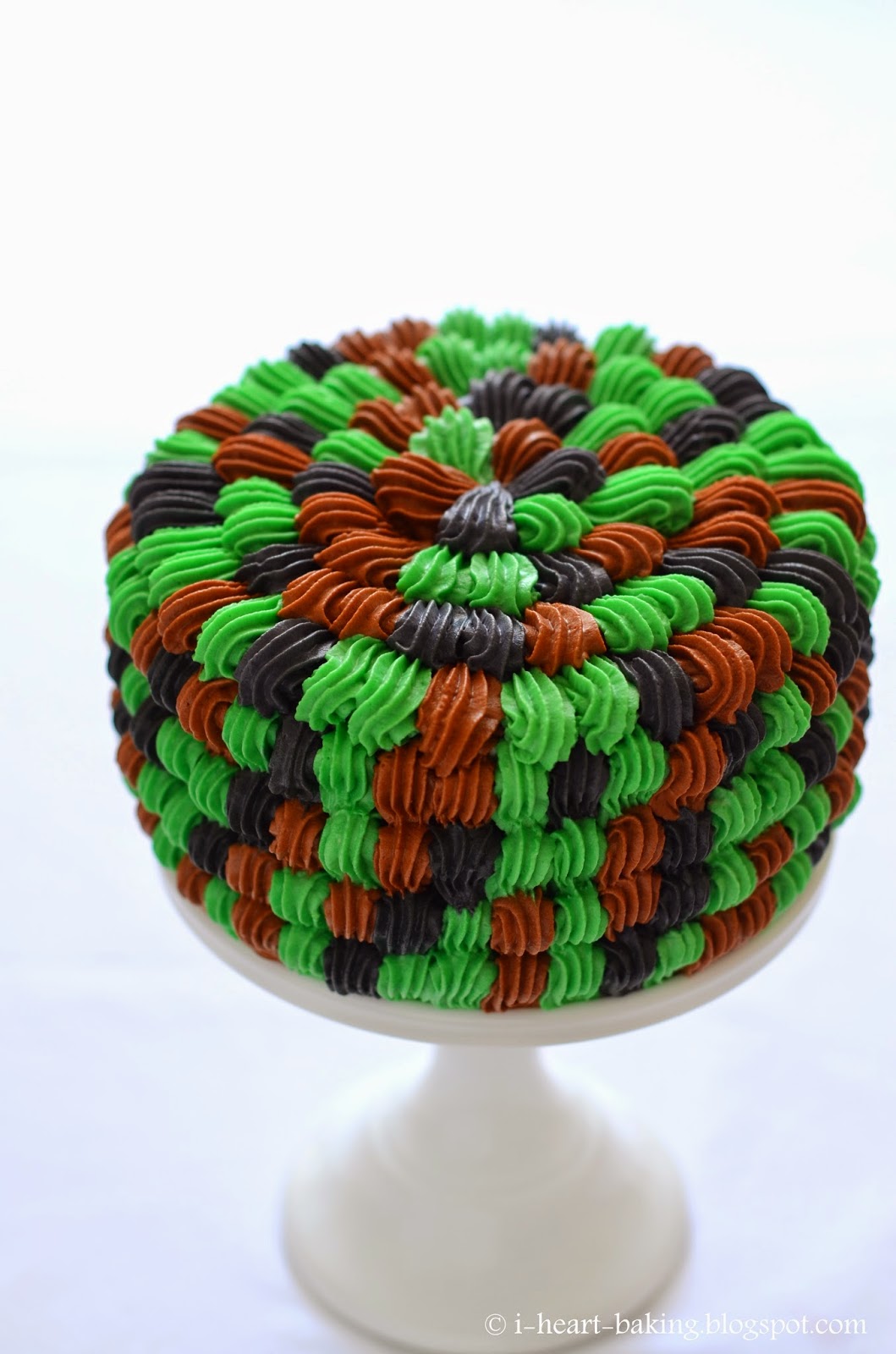 And for the inside of the cake! 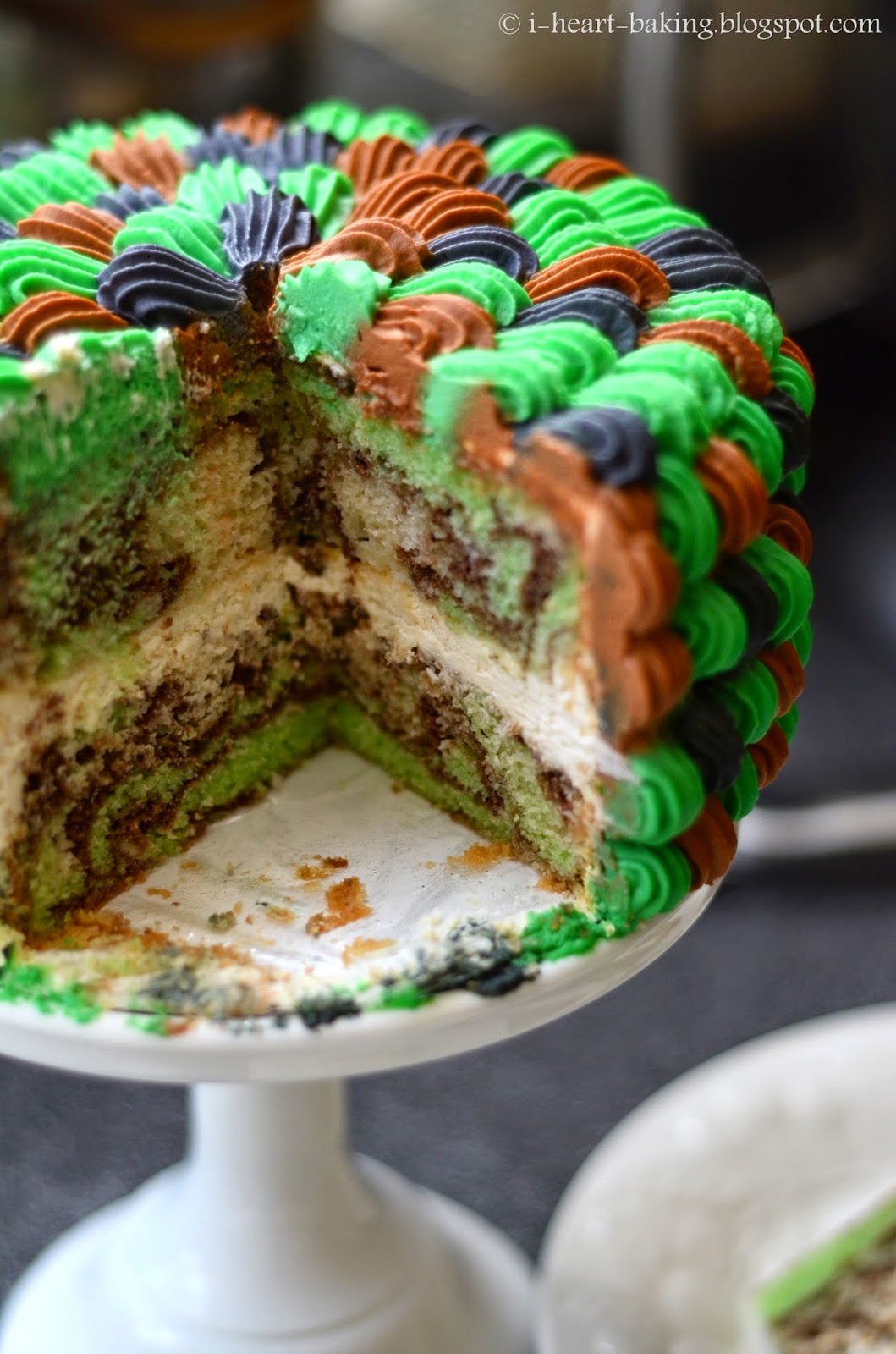 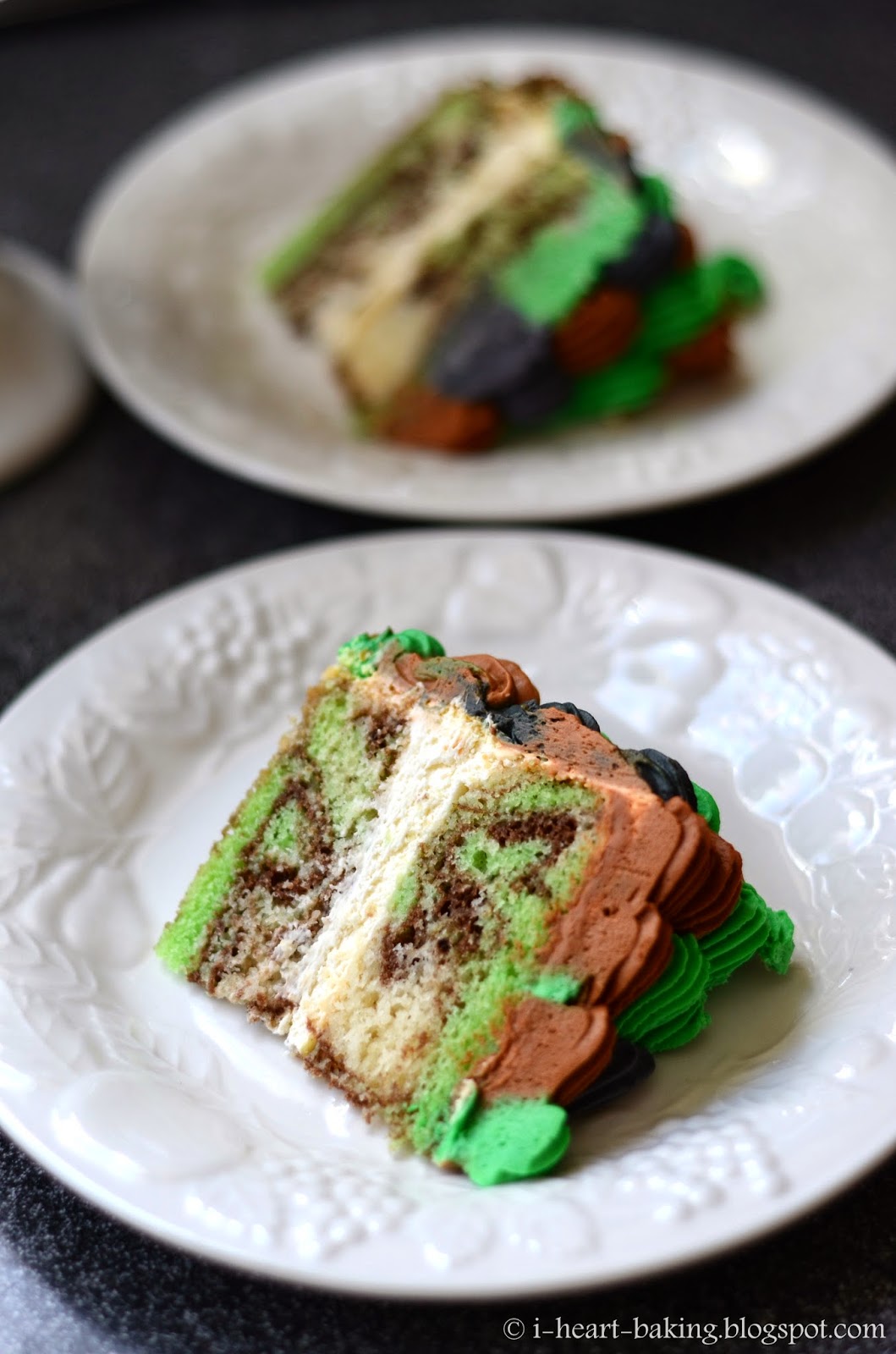 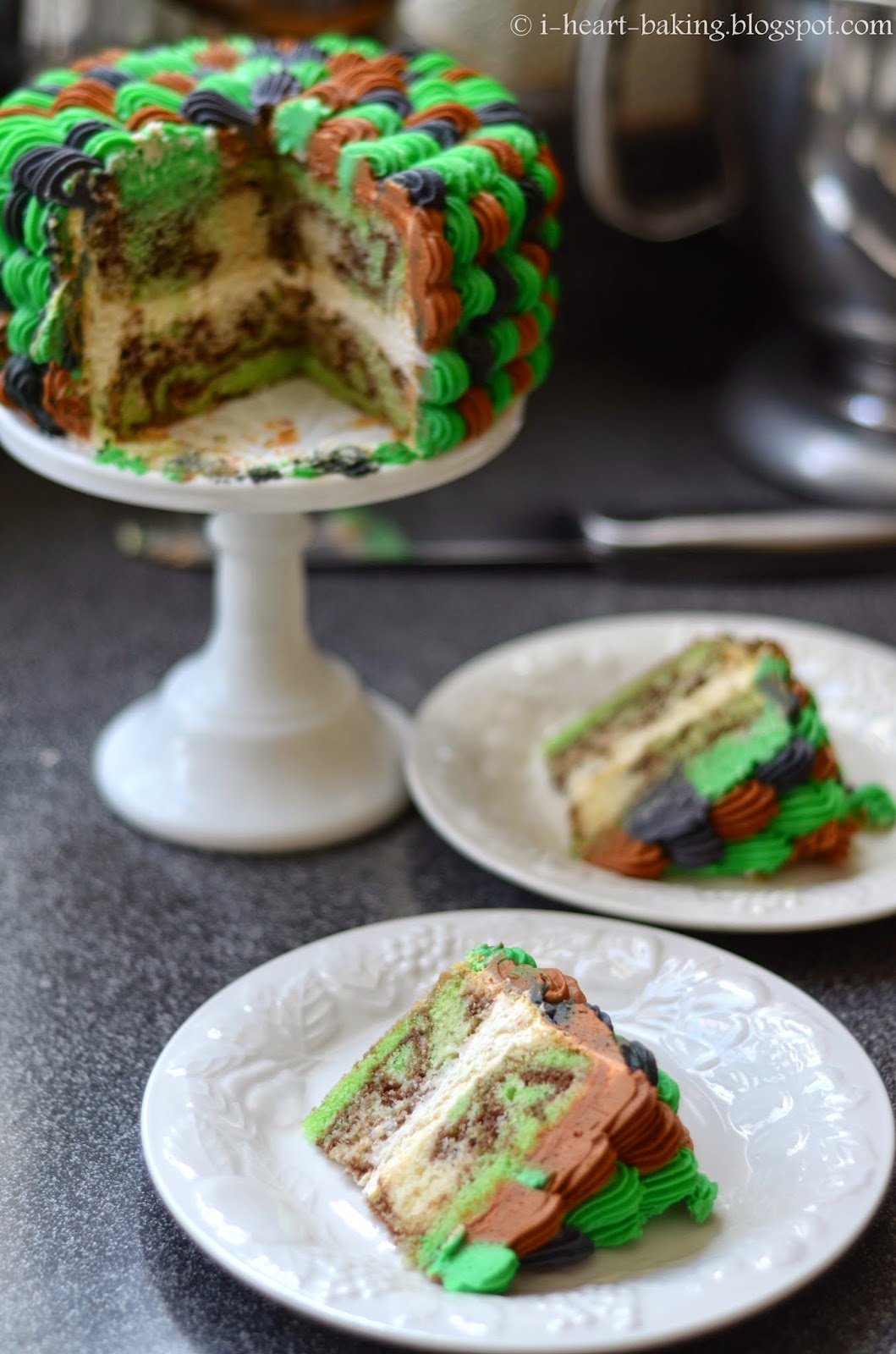 Happy Birthday, my love!
Posted by michele at 2:07 AM 6 comments