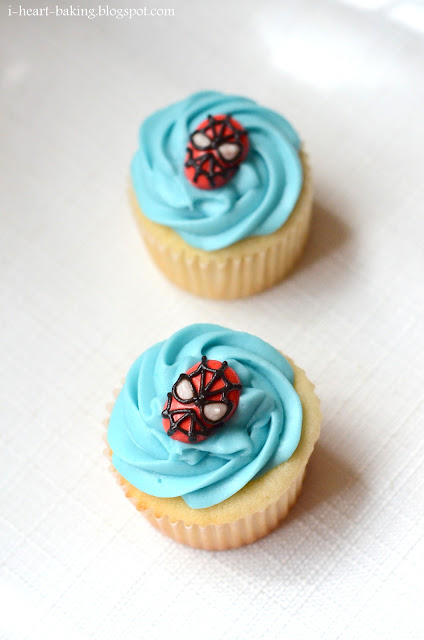 For my son Matthew's 5th birthday, I made Spiderman cookies and a Spiderman cake for his birthday party, but I also decided to make Spiderman cupcakes for his Kindergarten class to celebrate with him!  But instead of making a topper out of royal icing like I did for last year's Superman cupcakes, I wanted to pipe Spidey's face directly on top of the cupcake, like how I do for my Hello Kitty cupcakes.

For the cupcake batter, I wanted to try this recipe I recently saw from Sweetapolita (love her!) for whipped vanilla dream cupcakes - they sounded delicious, and since it was adapted from the same Dorie Greenspan recipe that I used for the Spiderman birthday cake, I thought it would be a perfect experiment to see which recipe I liked better!  The main highlight in Sweetapolita's cupcakes was to fold in whipped cream at the end, to give it a light yet moist texture. 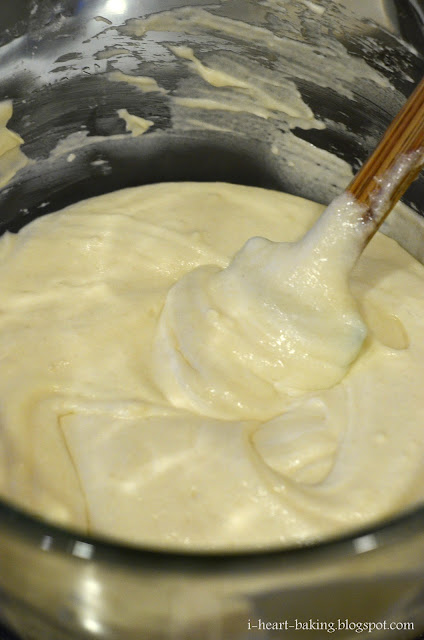 After filling my lined cupcake tins 3/4 full and baking them up, they came out of the oven looking airy and light, and really fluffy! 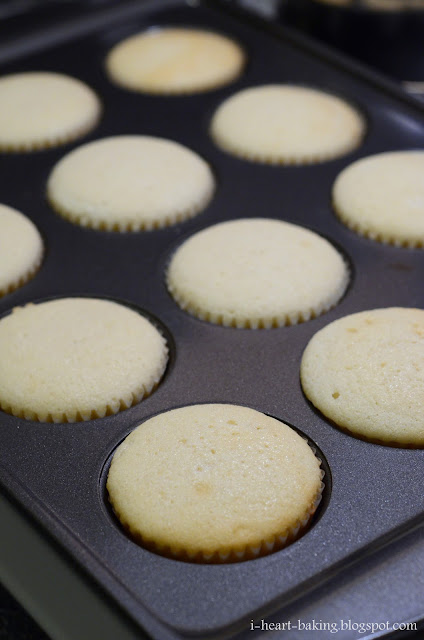 But then after they came to room temperature, they started deflating and sinking in the middle. :( Maybe I didn't let them bake long enough?  However when I tasted one, it still tasted great, was very moist, and had a fine crumb.  So I decided to use them anyway, and used a Wilton 1M tip to pipe big swirls of blue tinted cream cheese frosting. 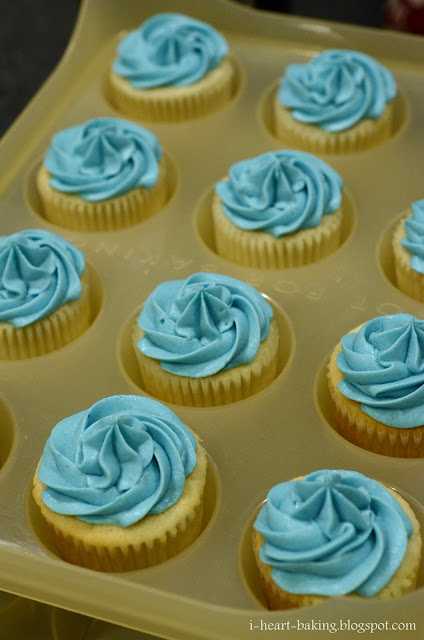 Then it was time for the fun part - piping Spiderman's face!  So I started by piping an oval blob of red frosting, and then used a small point tip to pipe on the eyes in white frosting. 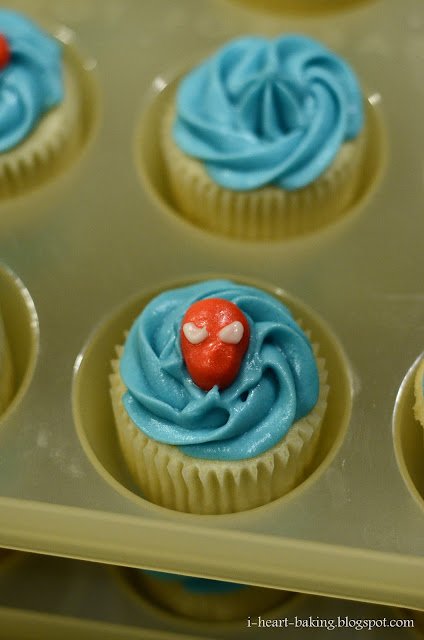 Next I used black frosting to outline the eyes. 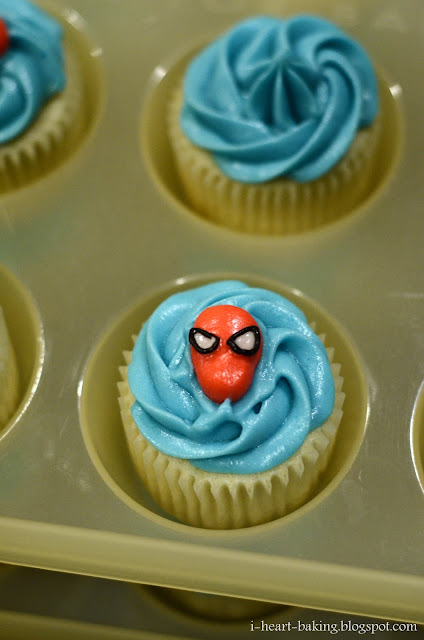 And finally I used black frosting to pipe the web on Spiderman's face. 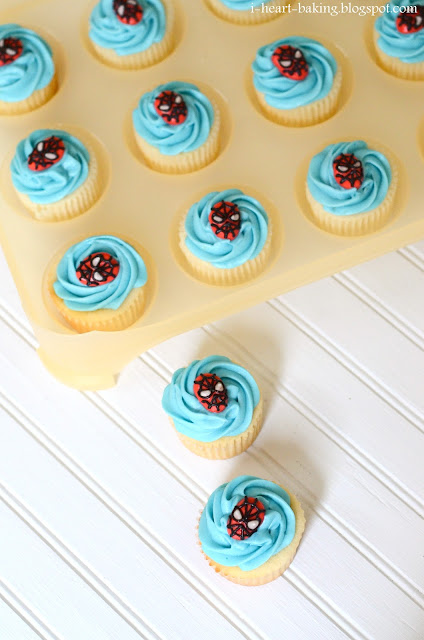 I loved the end result, and I loved even more that it was all made with frosting! 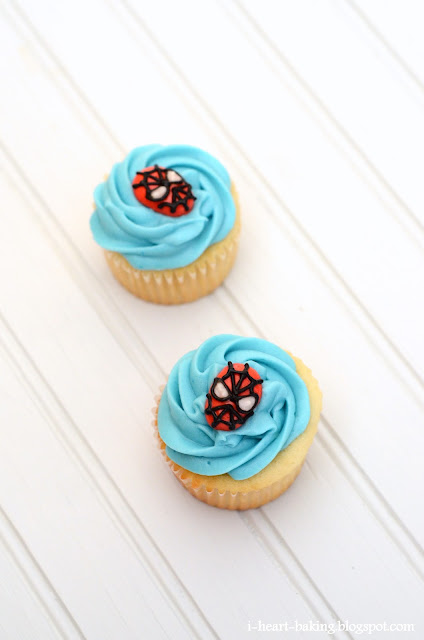 And even though the cupcakes had deflated from their initial fluffy glory, I still loved the taste and texture of the cake. 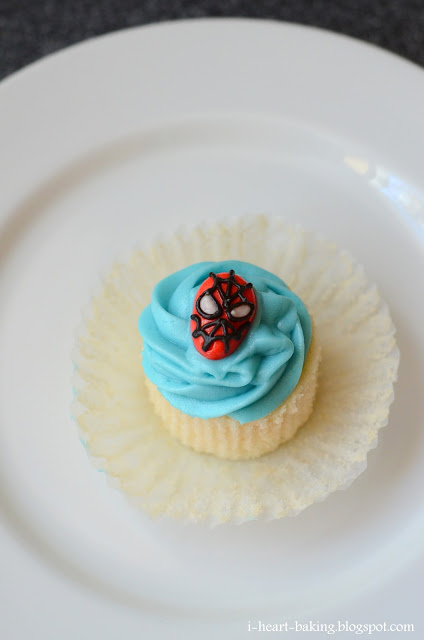 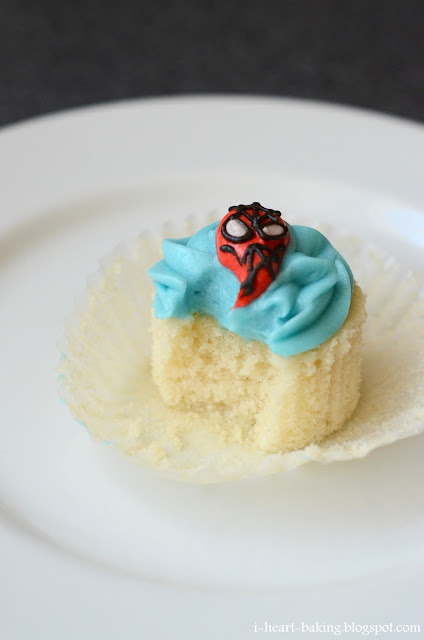 And even more important, Matthew and his classmates loved the cupcakes!  Happy Birthday Matthew!!! 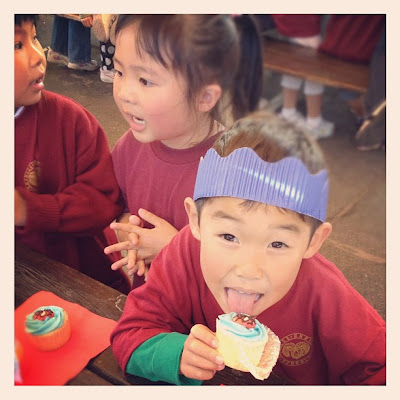