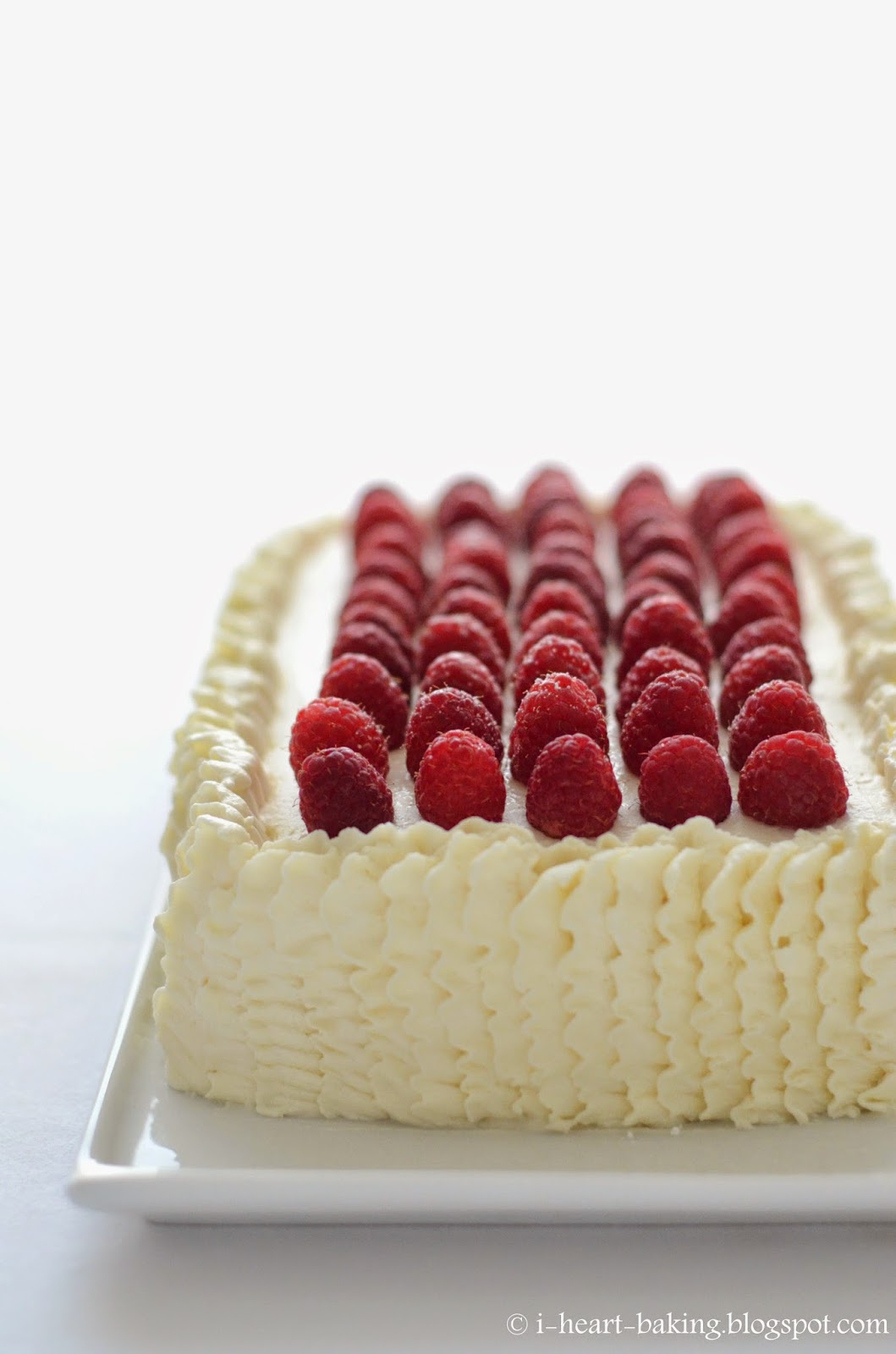 Last year for Mother's Day, I made this flower suprise-inside cake. So when my friend Helen sent me a link to this super cute typography cake, I got the idea to do a cake with letters "MOM" inside the cake when Mother's Day rolled around this year. I was so excited, I even bought these mini alphabet fondant cutters! 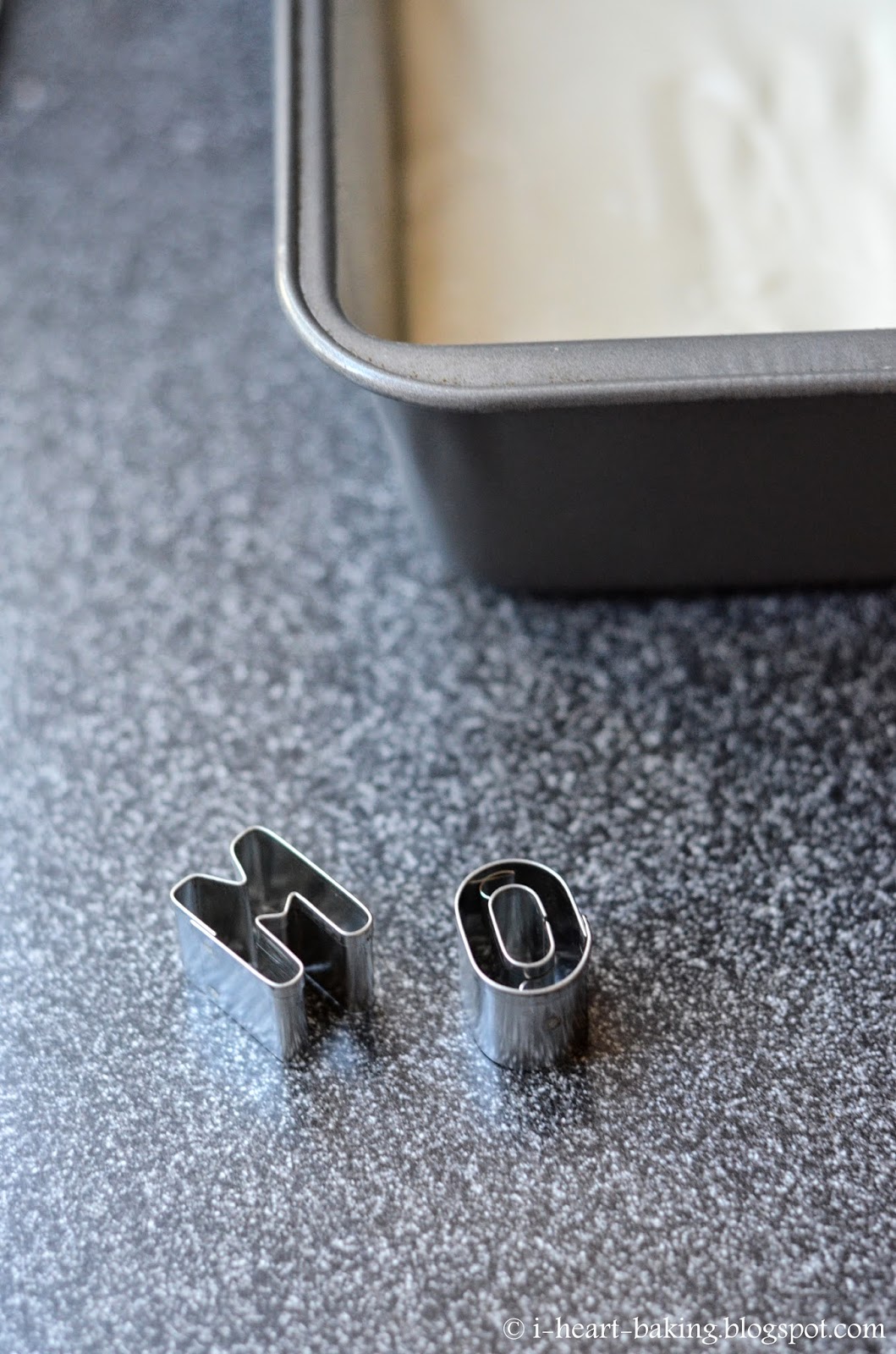 The typography cake used "edible dough", but I didn't know what that was (and it doesn't sound very tasty either), so I decided to make the letters cut out from chocolate cake! So I baked up a homemade 8-inch chocolate cake, let it cool overnight in the fridge, and the next morning I set out to cut my letters out of cake!

Only, it didn't work. The cutters were so small, that I couldn't get the pieces of cake out in one piece! I suppose that's why the typography cake was made from "edible dough" in the first place - doh! I thought about using fondant instead, but who wants fondant baked into the middle of their cake?! So, I had to abandon my surprise-inside letters idea and settle for a simpler (and bigger) shape to cut out of chocolate cake. Hearts it would be! 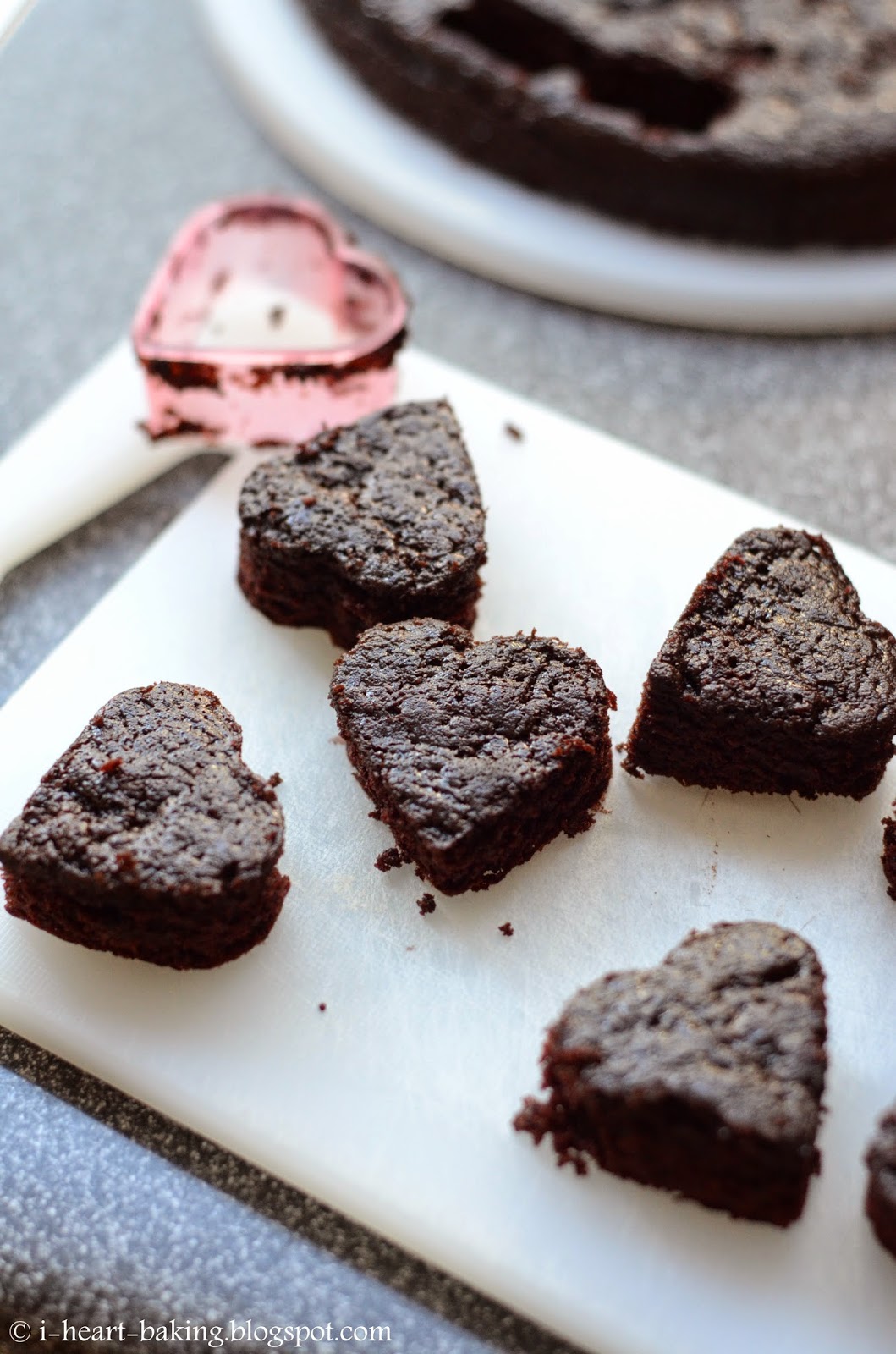 Once I cut out a bunch of shapes, I made a batch of homemade vanilla cake. Except I've been toying with the idea of making a non-dairy white cake, so I decided to replace the butter with coconut oil, and I replaced the milk with coconut milk. It would be a coconut cake!

I poured a bit of the batter into the bottom of my prepared loaf pan ... 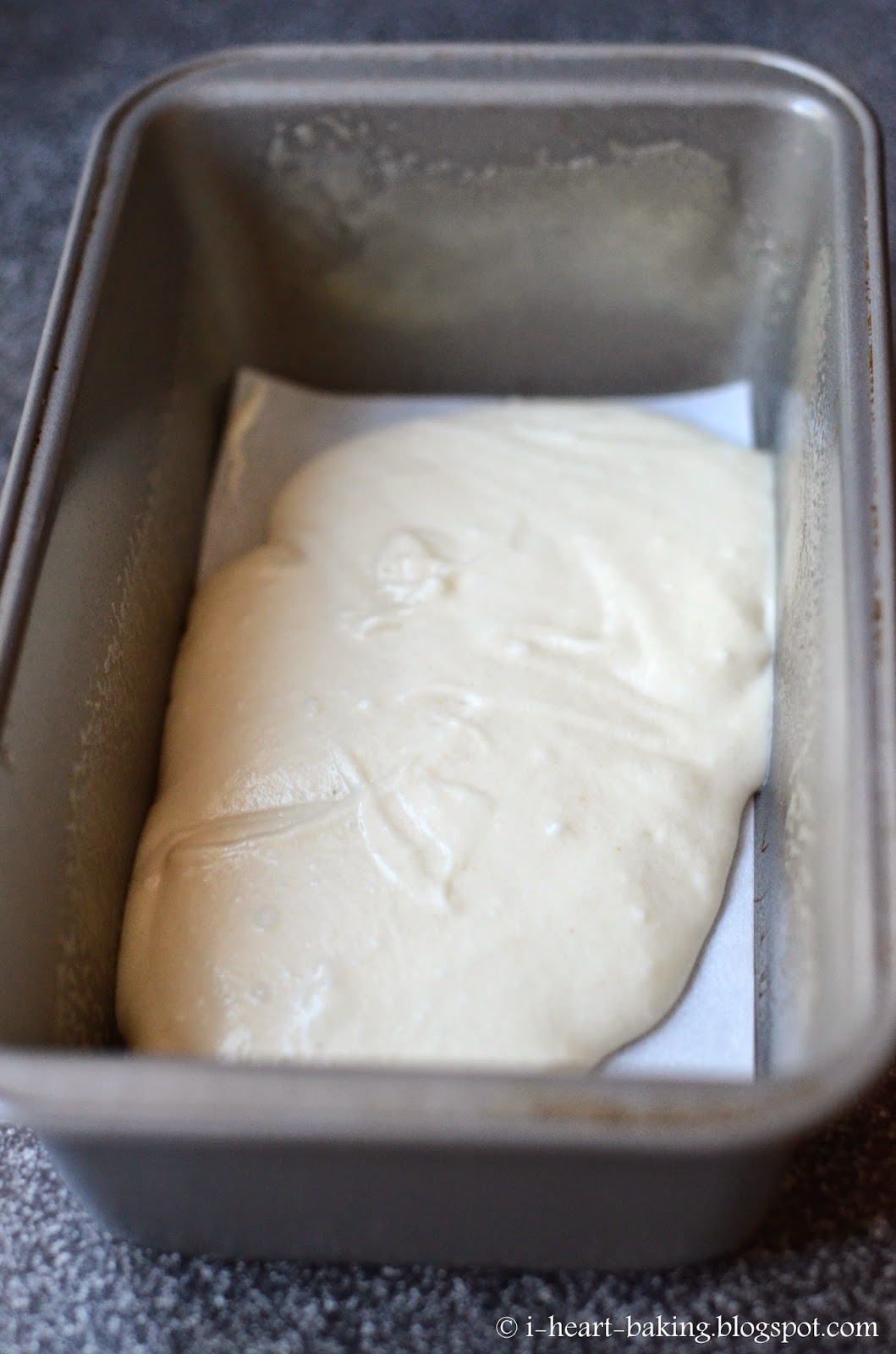 ... and then placed my chocolate cake heart cutouts into the batter. (Note that I placed the hearts upside down, so that I could flip the cake upside down and have a flat bottom as the top of the cake, and then the hearts would be right side up. That sounded confusing, but I'm sure you know what I mean!). 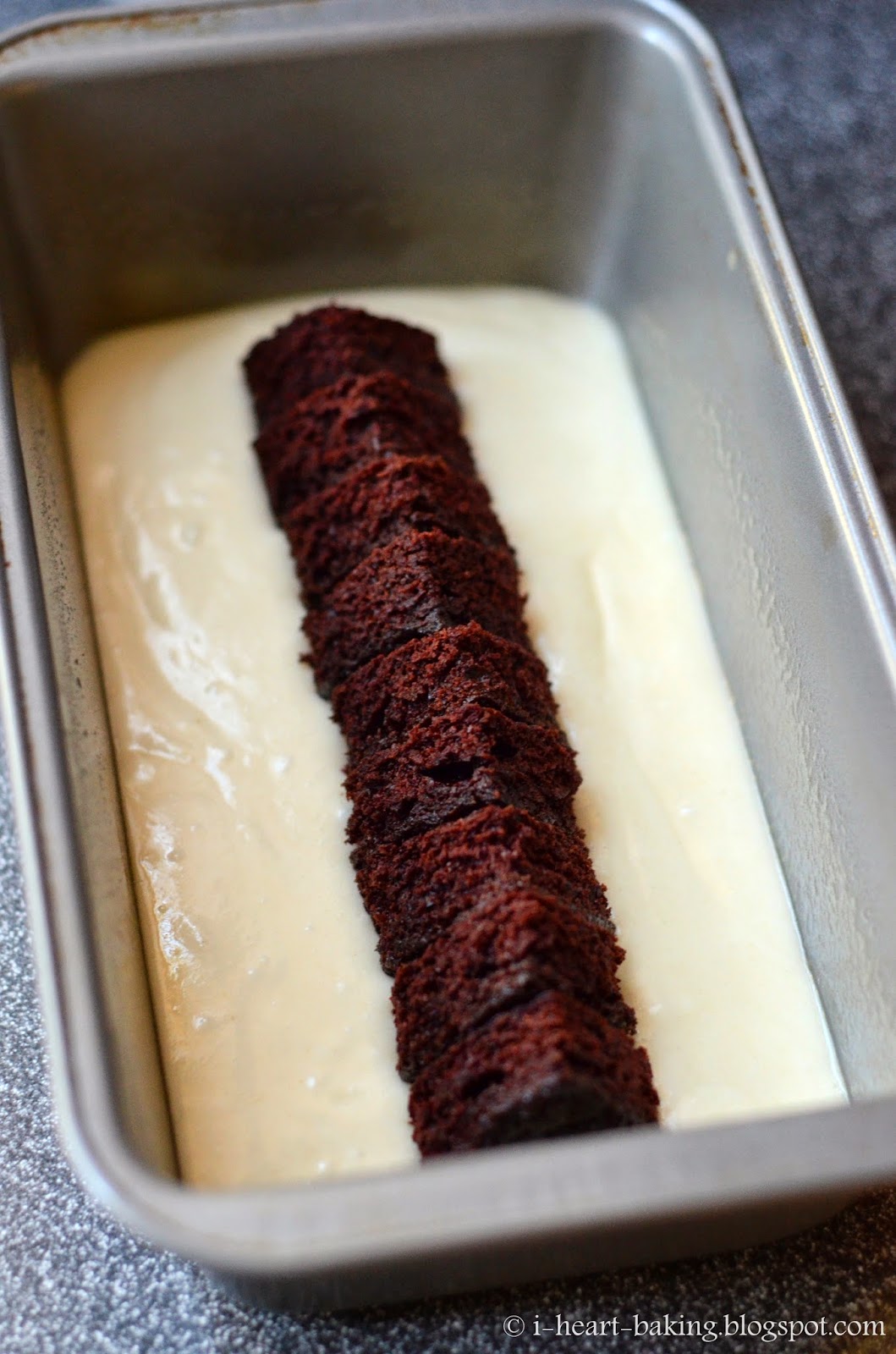 The cake came out of the oven and looked rather flat. Darn. I suppose the problem could be either: a) I used coconut oil of butter, b) I used coconut milk instead of milk, or c) the fact that I've never baked my vanilla cake recipe in a loaf pan. (I'll have to experiment with this more!) 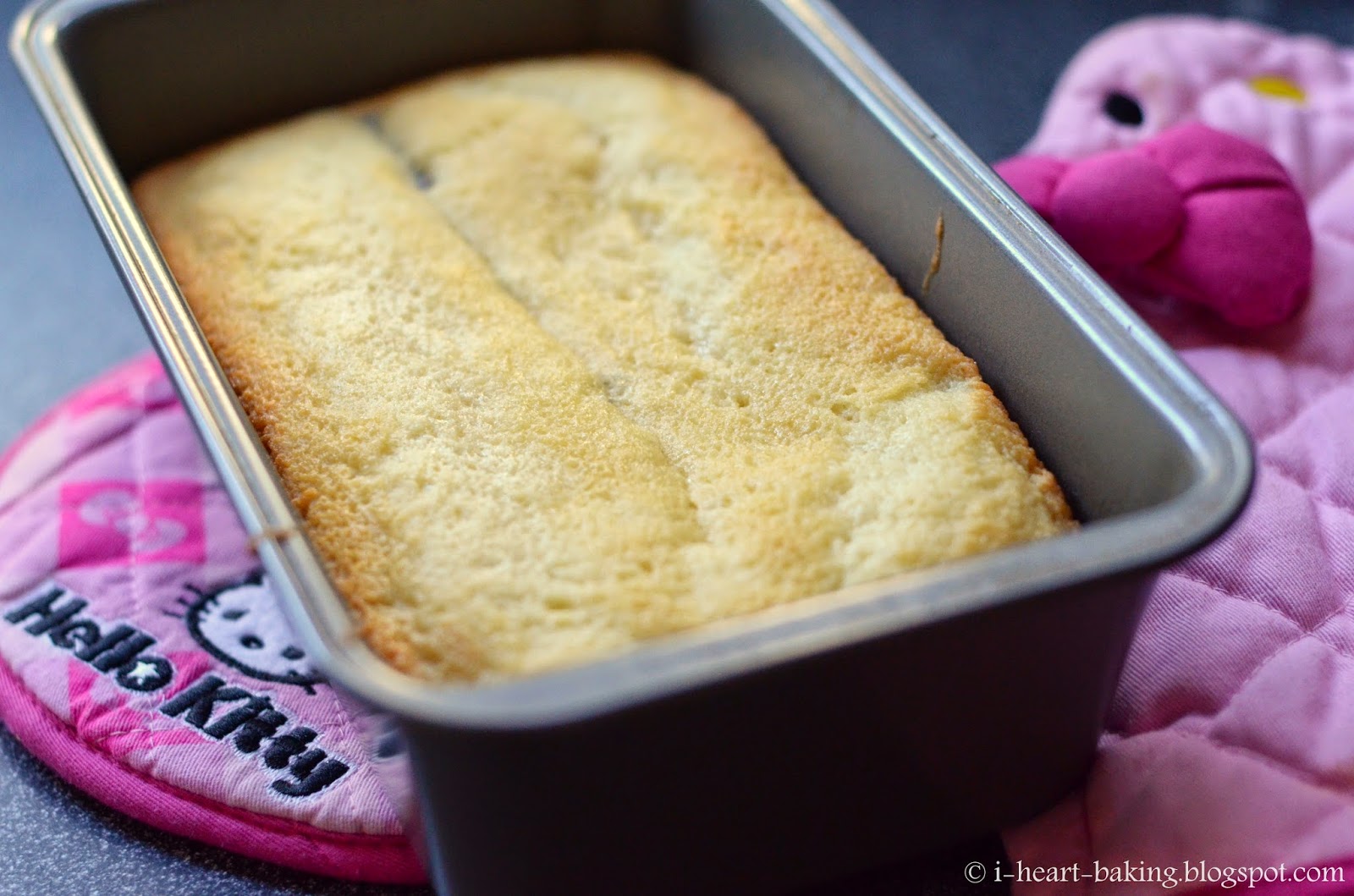 Once the cake cooled, I whipped up a batch of fresh whipped cream, and covered the top and the sides of the cake. (Note that if I were to make this a truly non-dairy coconut cake, I would use a meringue frosting instead of whipped cream.) I had just done this ruffled baby shower cake the weekend before, so I used the same piping technique on this cake. It didn't look quite as nice as the baby shower cake though, since my cake wasn't very tall it didn't have quite the same effect. 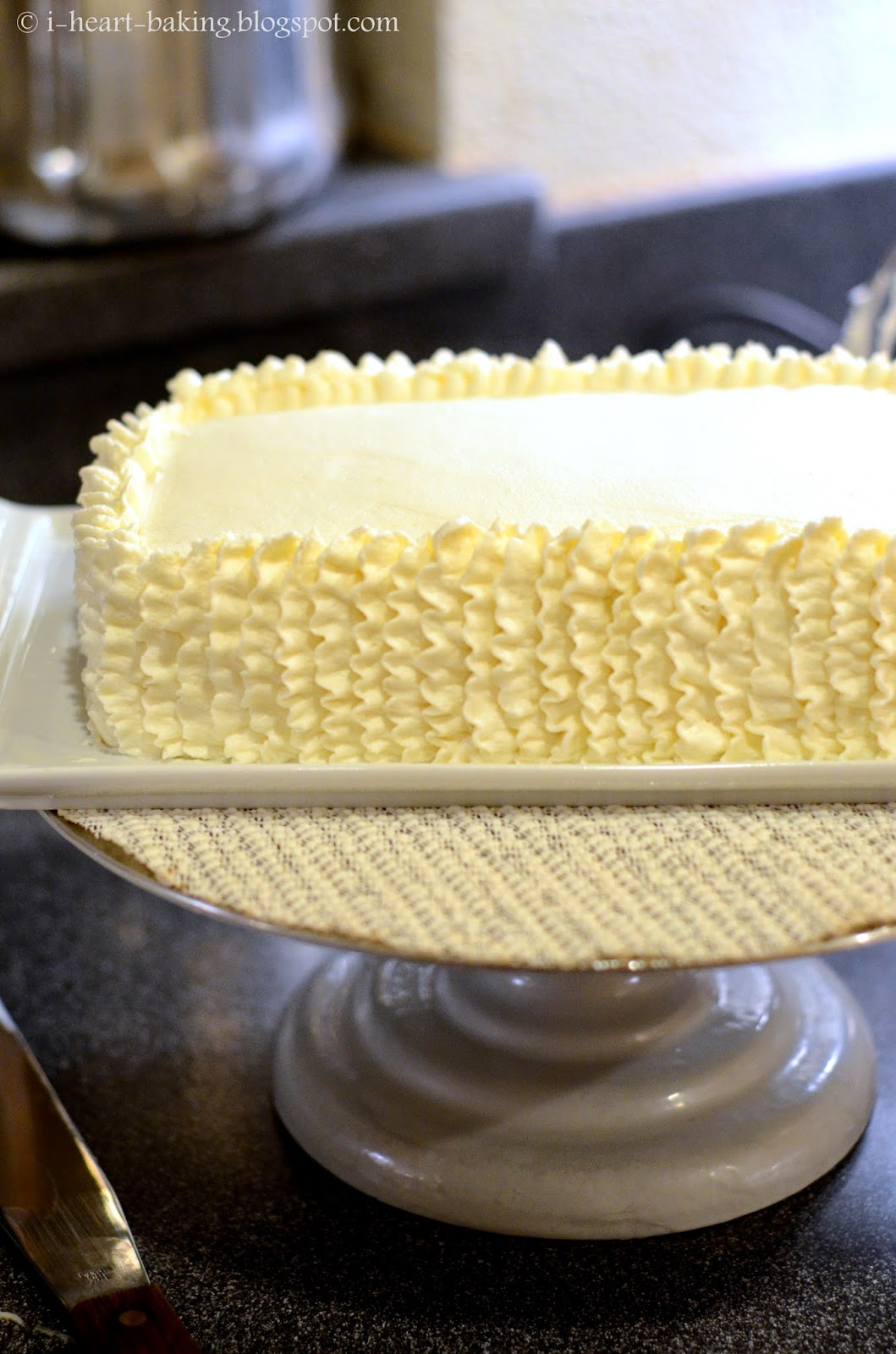 Before serving the cake the next day, I decorated the top with fresh raspberries. 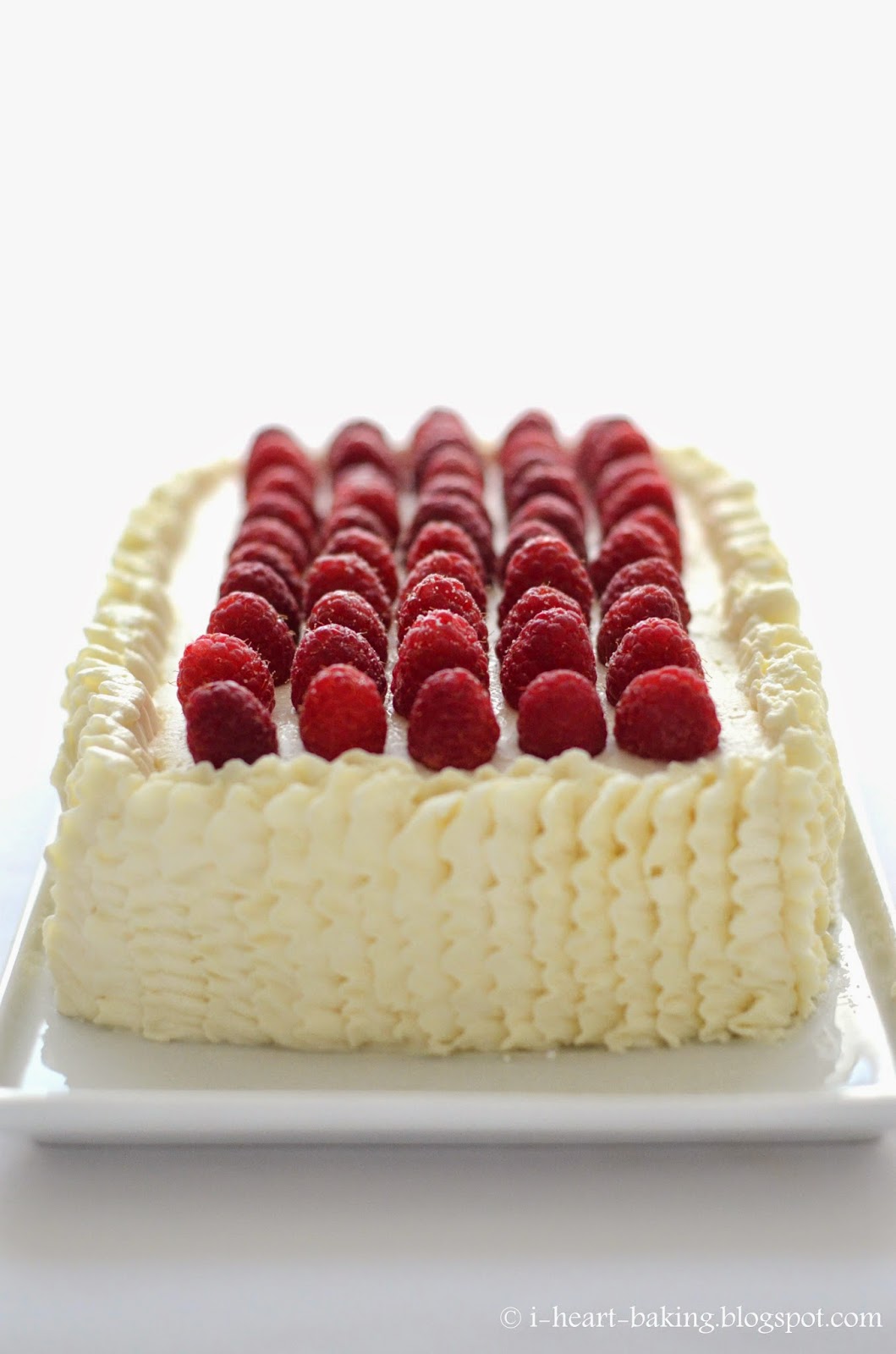 I just love the color combination of the cool creamy white with the bright fresh red of the raspberries! 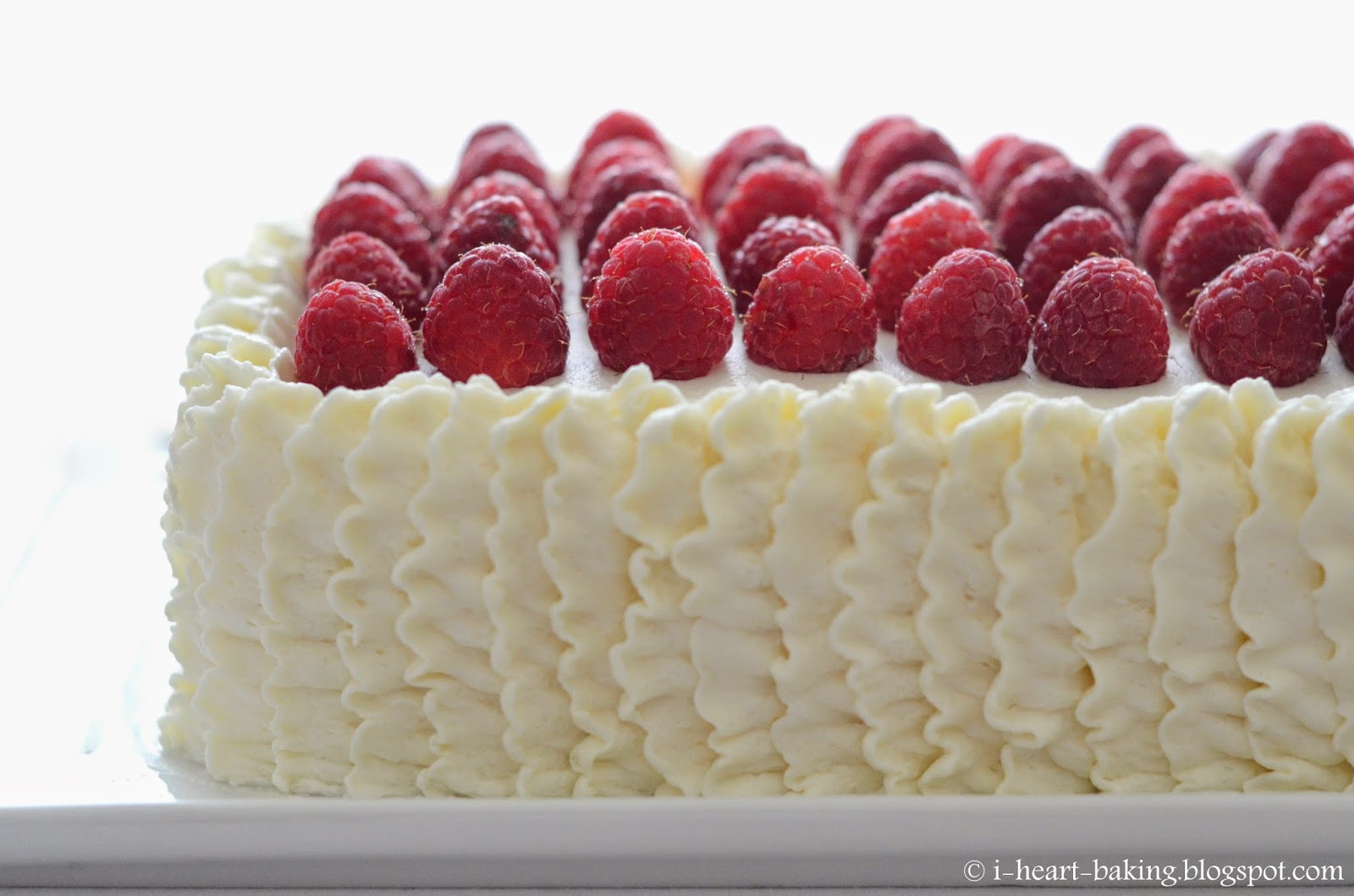 I couldn't wait to cut the cake and show my mom the surprise-inside chocolate heart! 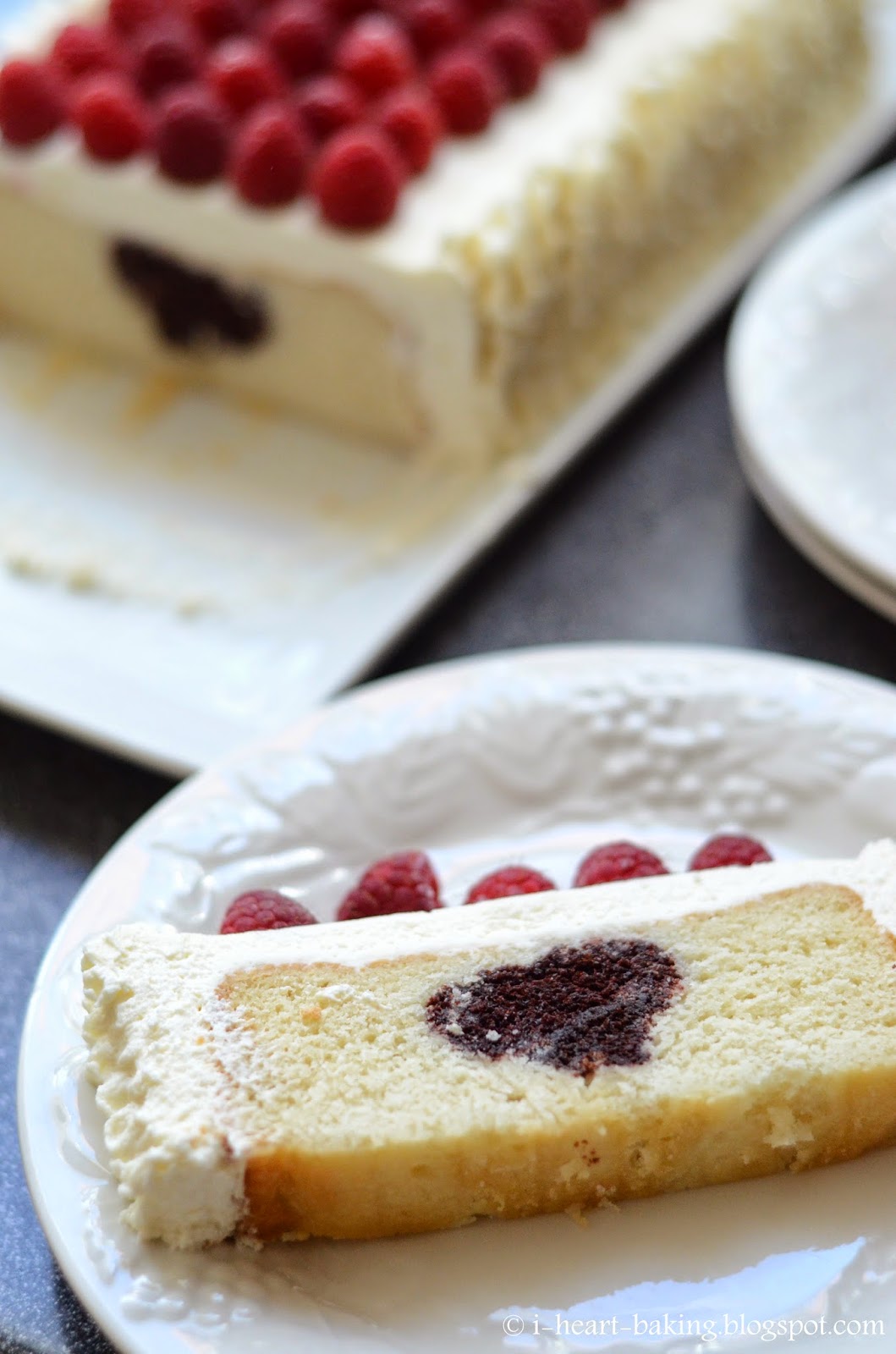 The cake wasn't quite coconut-y enough, but at least the heart came out quite cute, even though the words "MOM" inside the cake would have been way cuter. Guess I'll have to figure out a way and save that for next year. :) 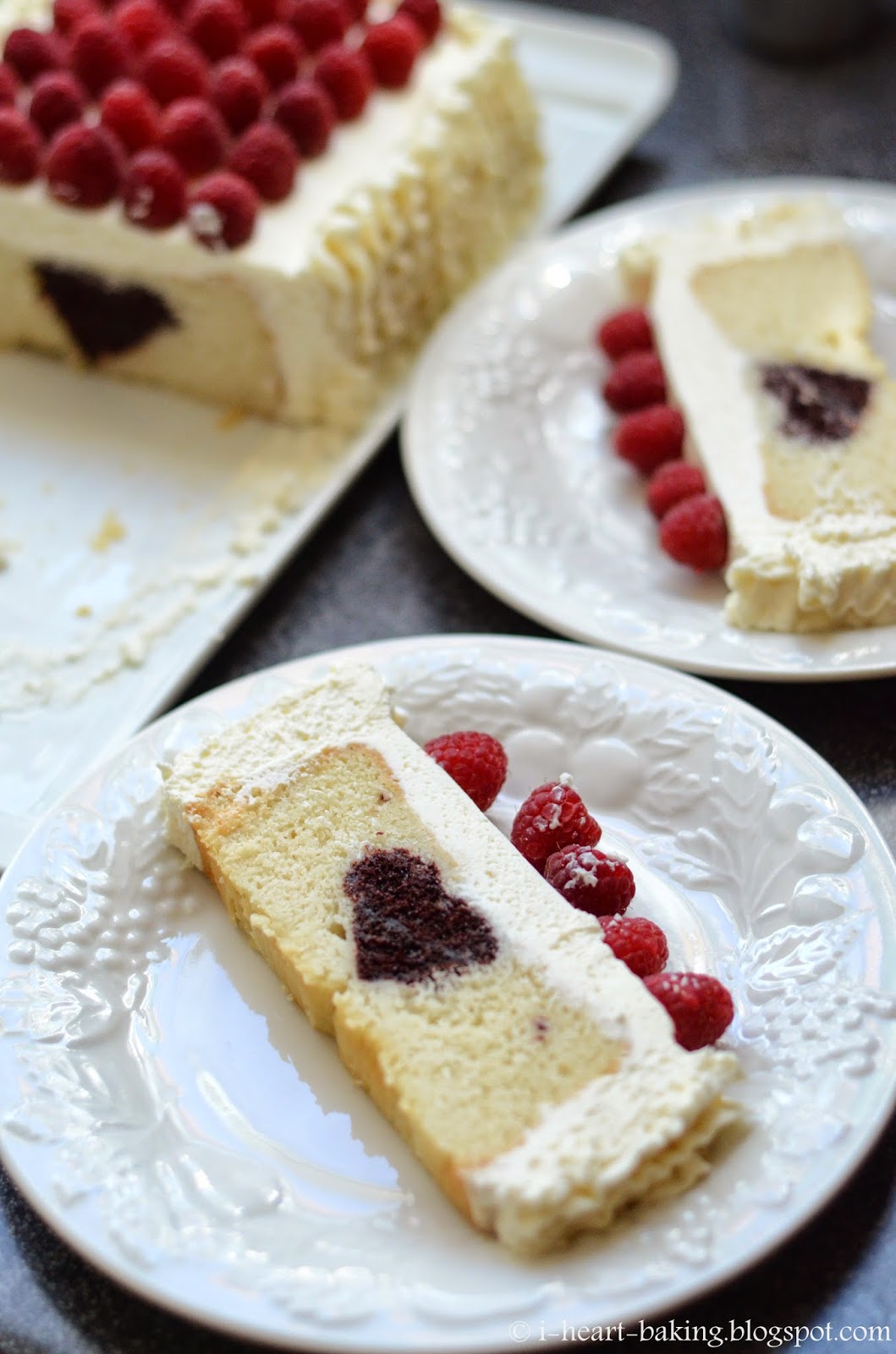