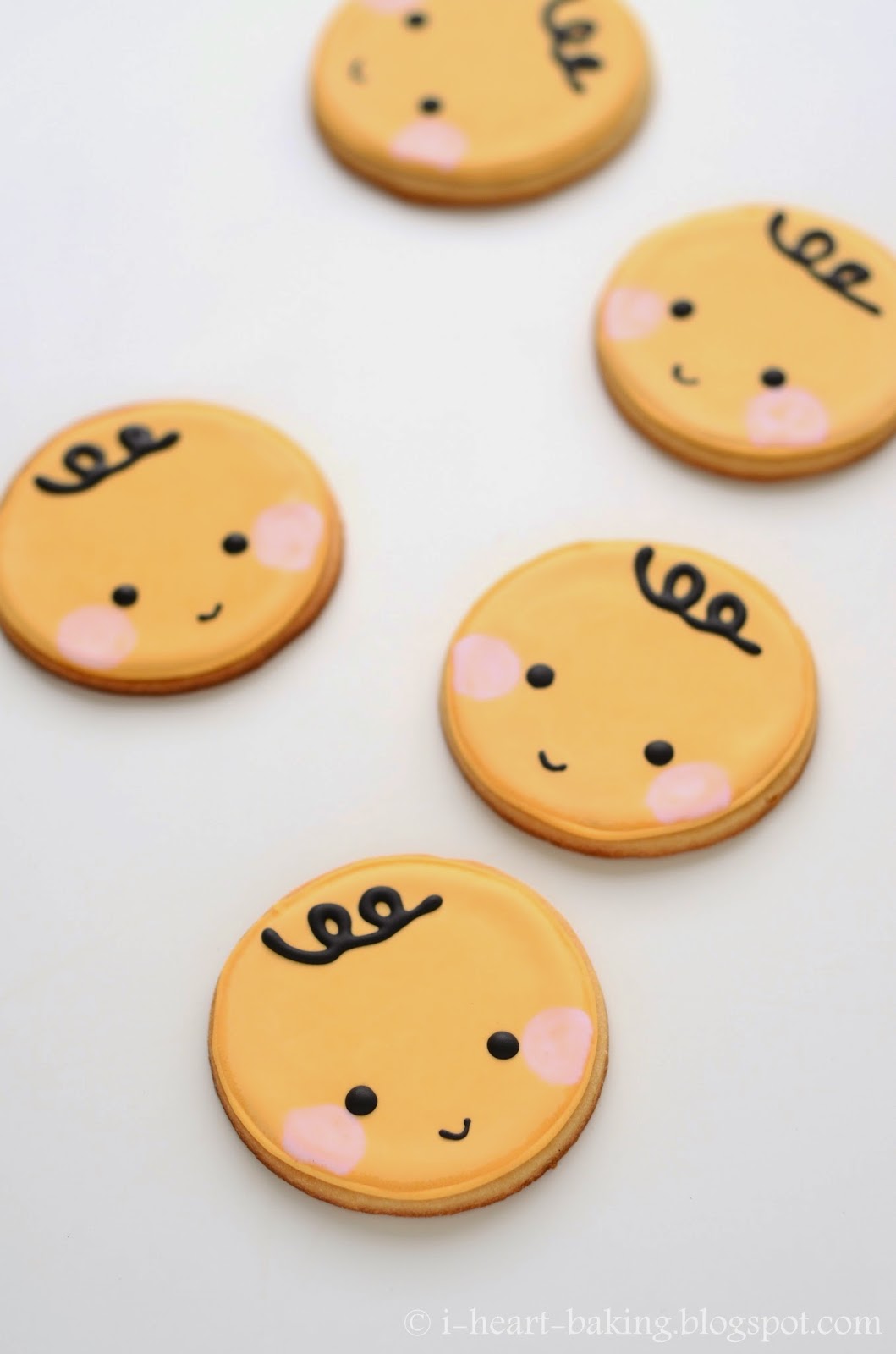 Last year I made this macaron-topped peaches and cream baby shower cake for my friend Irene, and while I was at the baby shower, I bumped into a girl named Stephanie that I went to high school with years and years ago! We hadn't seen each other since high school, and it was so nice to catch up with her!

Several months later, Stephanie asked me to make a cake for her twin sister Selena's baby shower! While I wasn't able to make the cake because of previous commitments, I offered to make cookies instead, since I could make them a few days in advance and then wrap them individually in cellophane bags to keep them fresh. 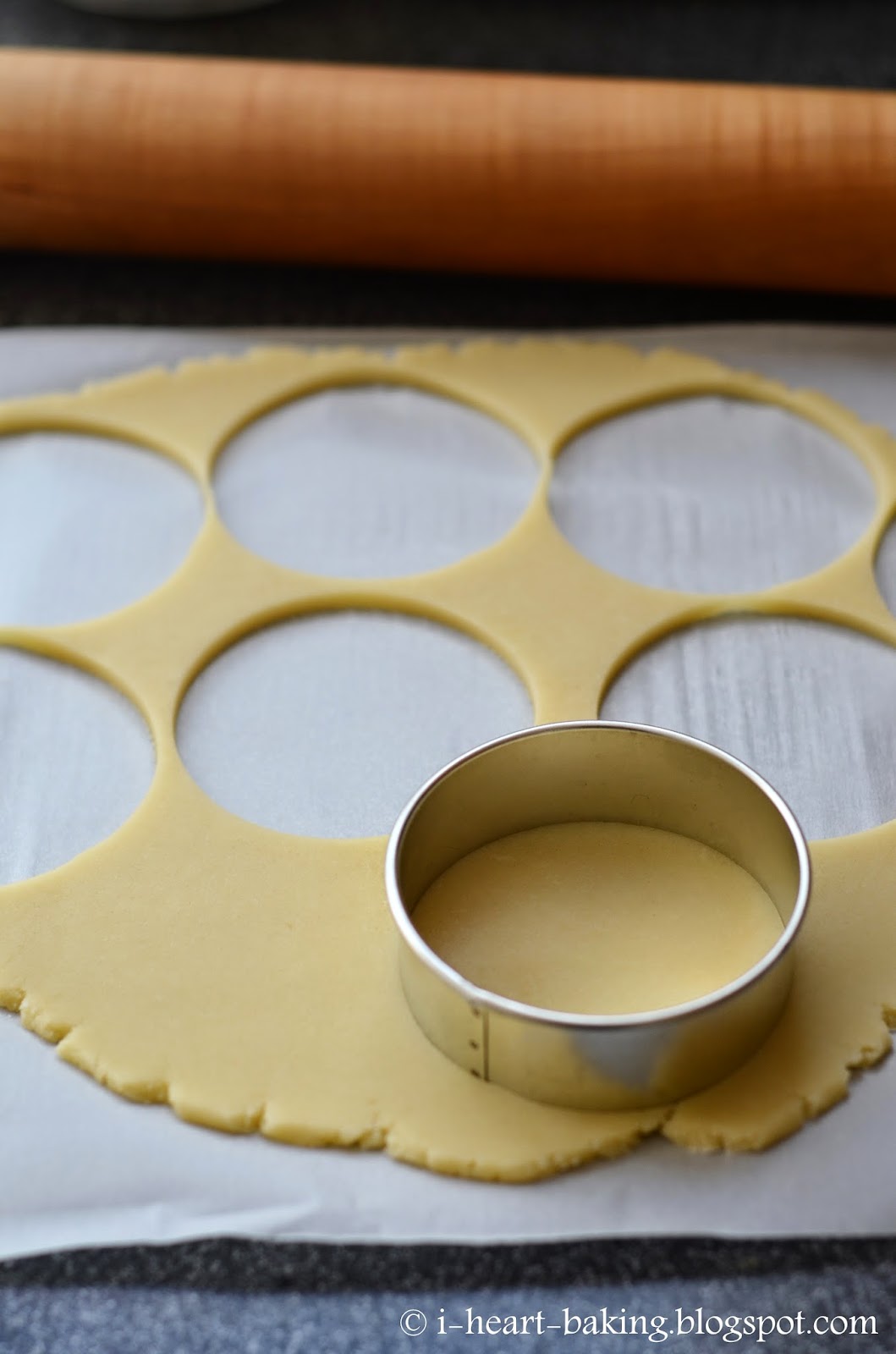 The cookies would be cute baby face cookies to match the logo on the baby shower invitations, so I used a 3.5 inch round cutter to cut out shapes from my sugar cookie dough (recipe in my new book, The Hello Kitty Baking Book!) 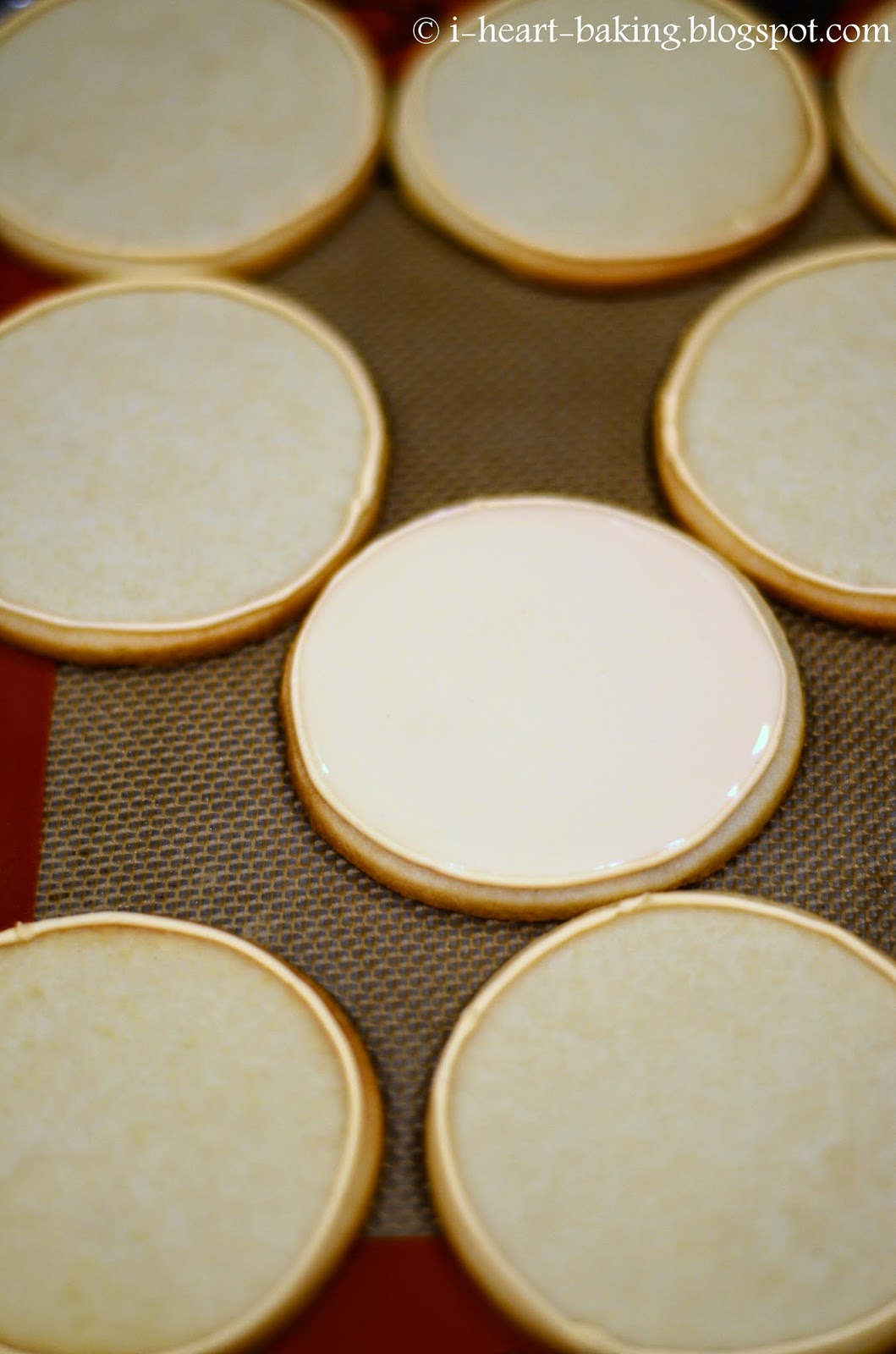 After the cookies were baked and cooled, I whipped up a batch of royal icing (recipe in my book as well!), and tinted the majority of it with ivory gel-based food coloring. Then I used ivory stiff royal icing to outline my circles, and ivory runny royal icing to fill them in. 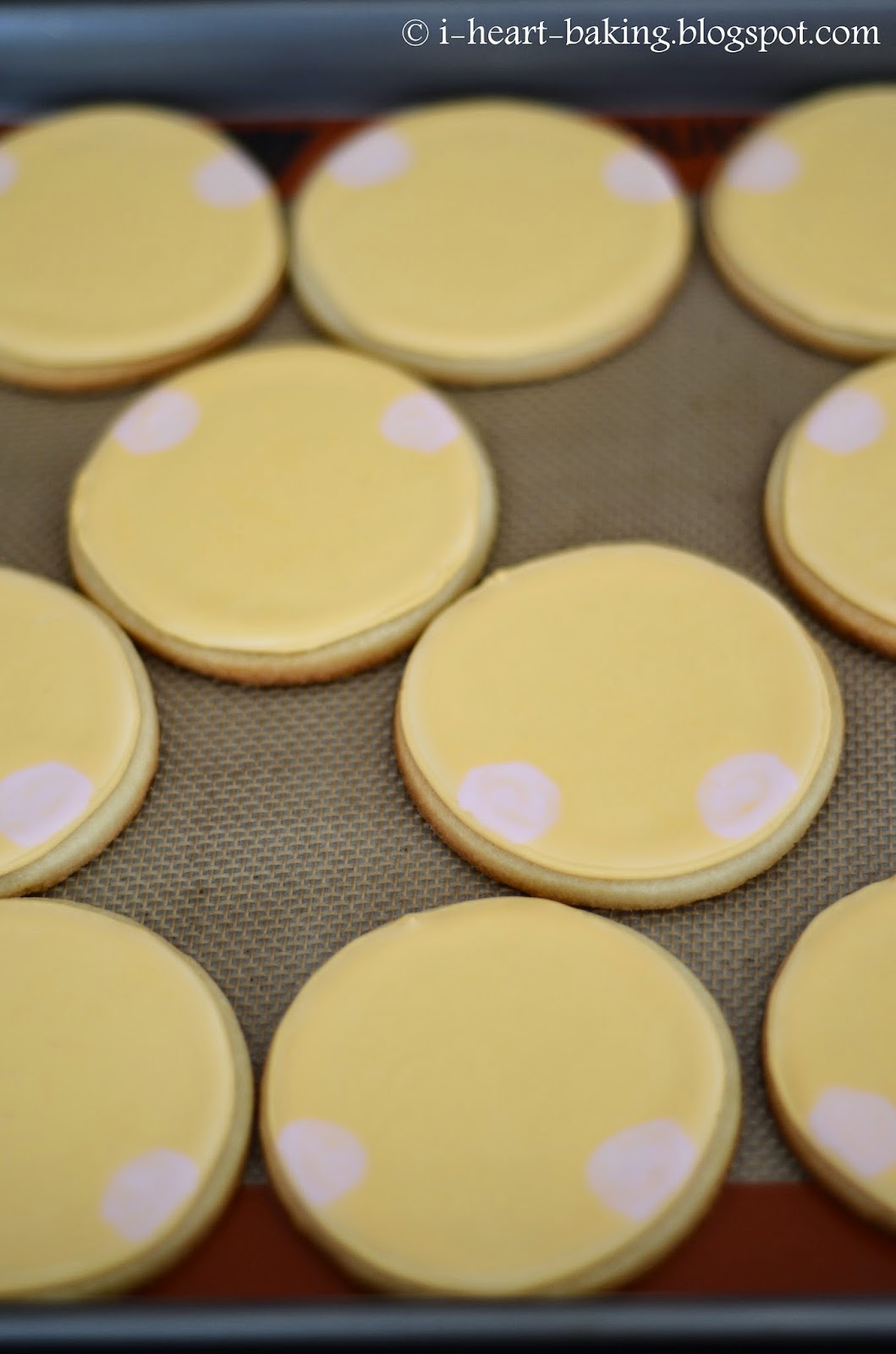 Then before the ivory icing dried, I dropped two small rounds of pink runny icing (for the cheeks) into the still-wet ivory icing. This way, the pink cheeks wouldn't be raised, and would be flush with the rest of the ivory icing. 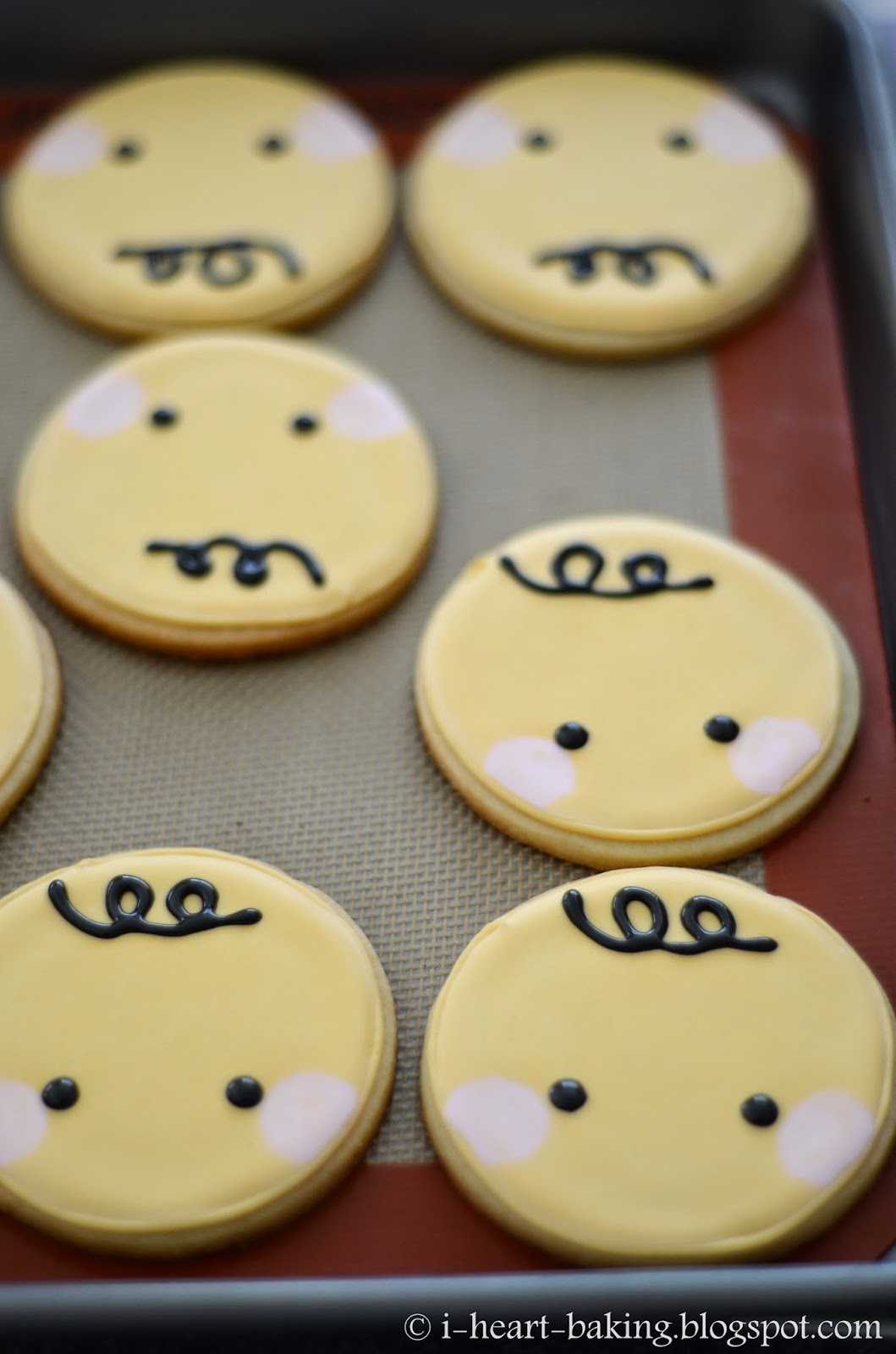 Then I used black stiff icing with a Wilton #2 tip to pipe the eyes and the little swirl of hair. 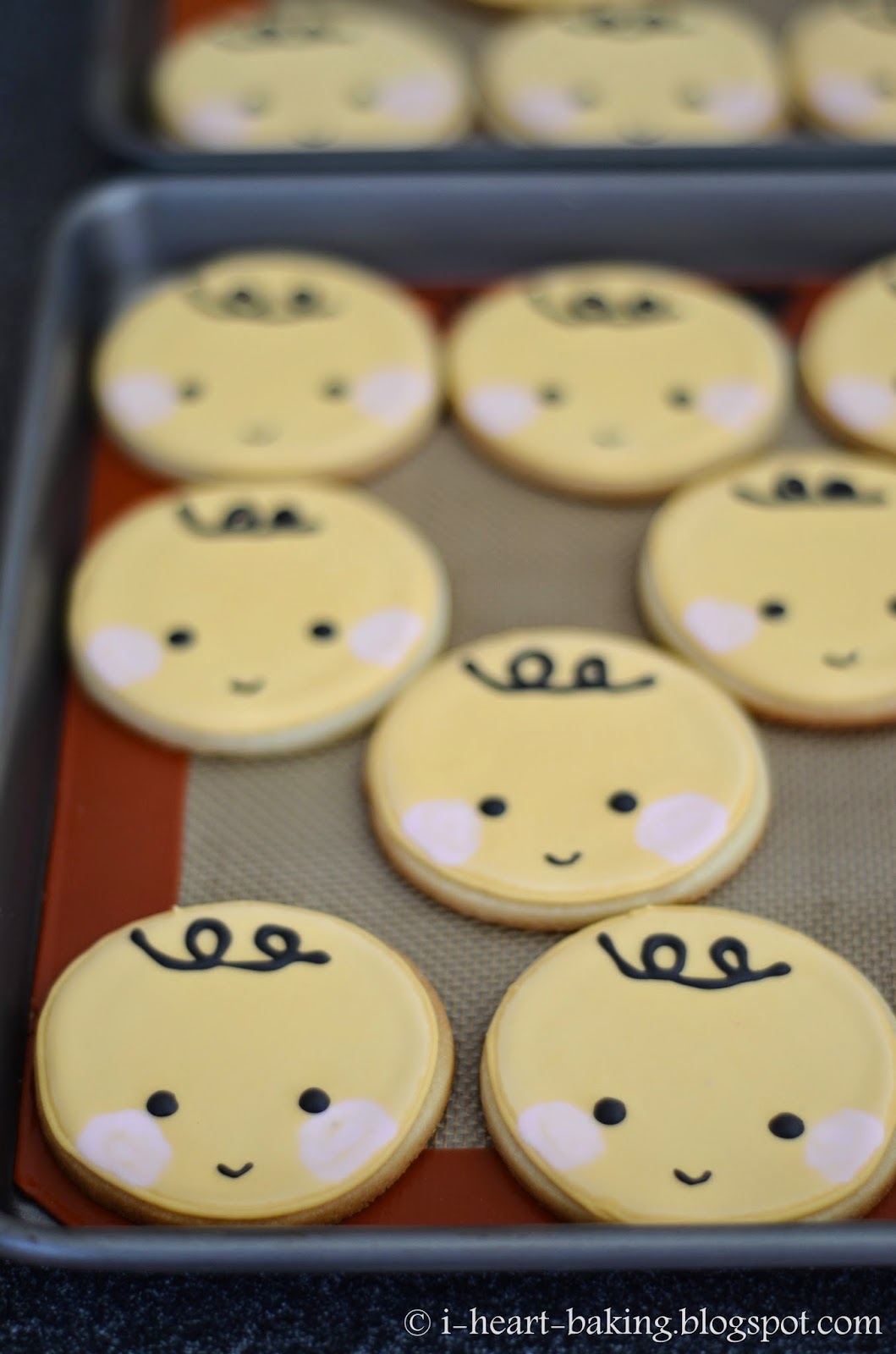 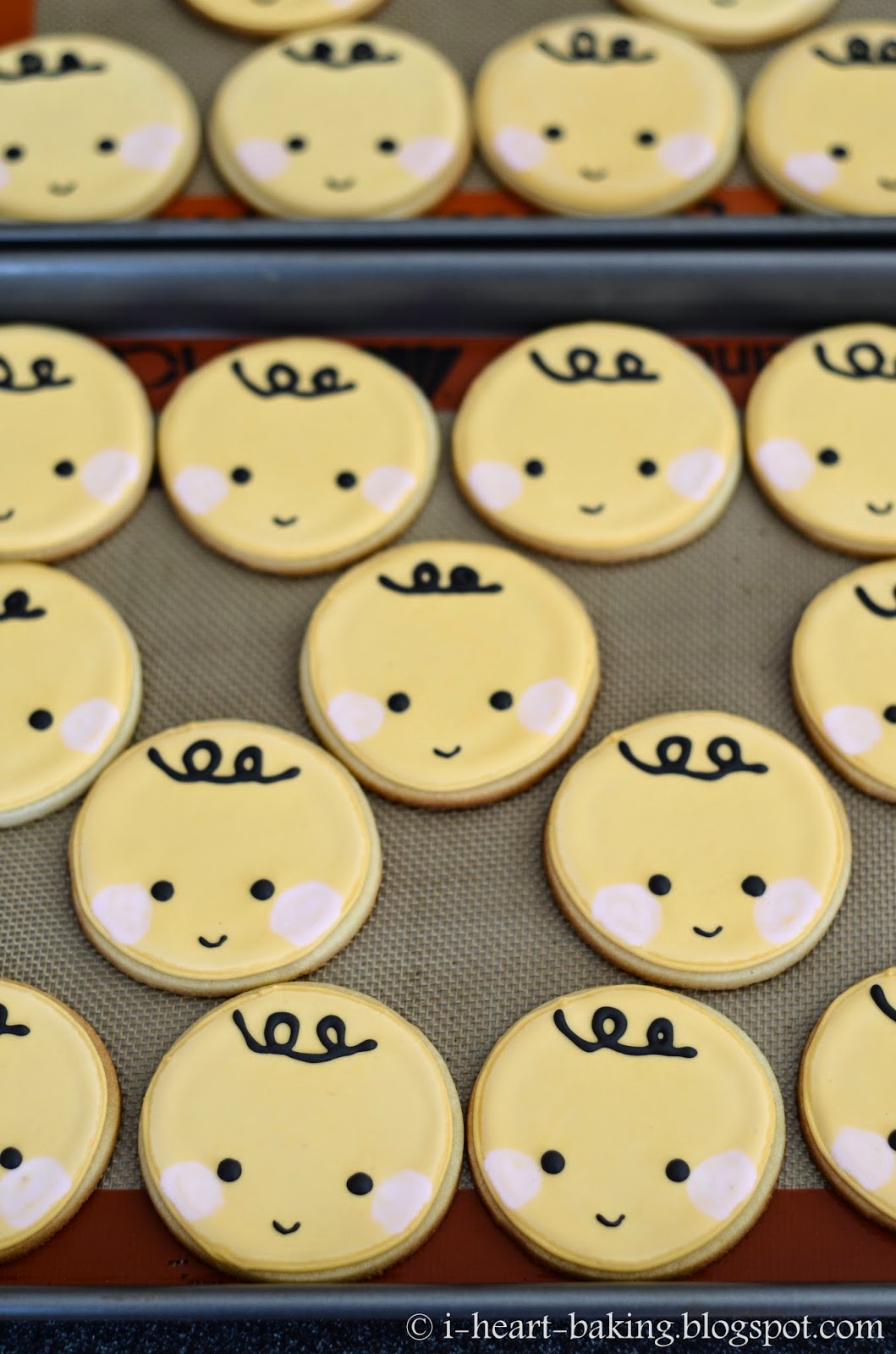 After I let them dry completely, they were done! 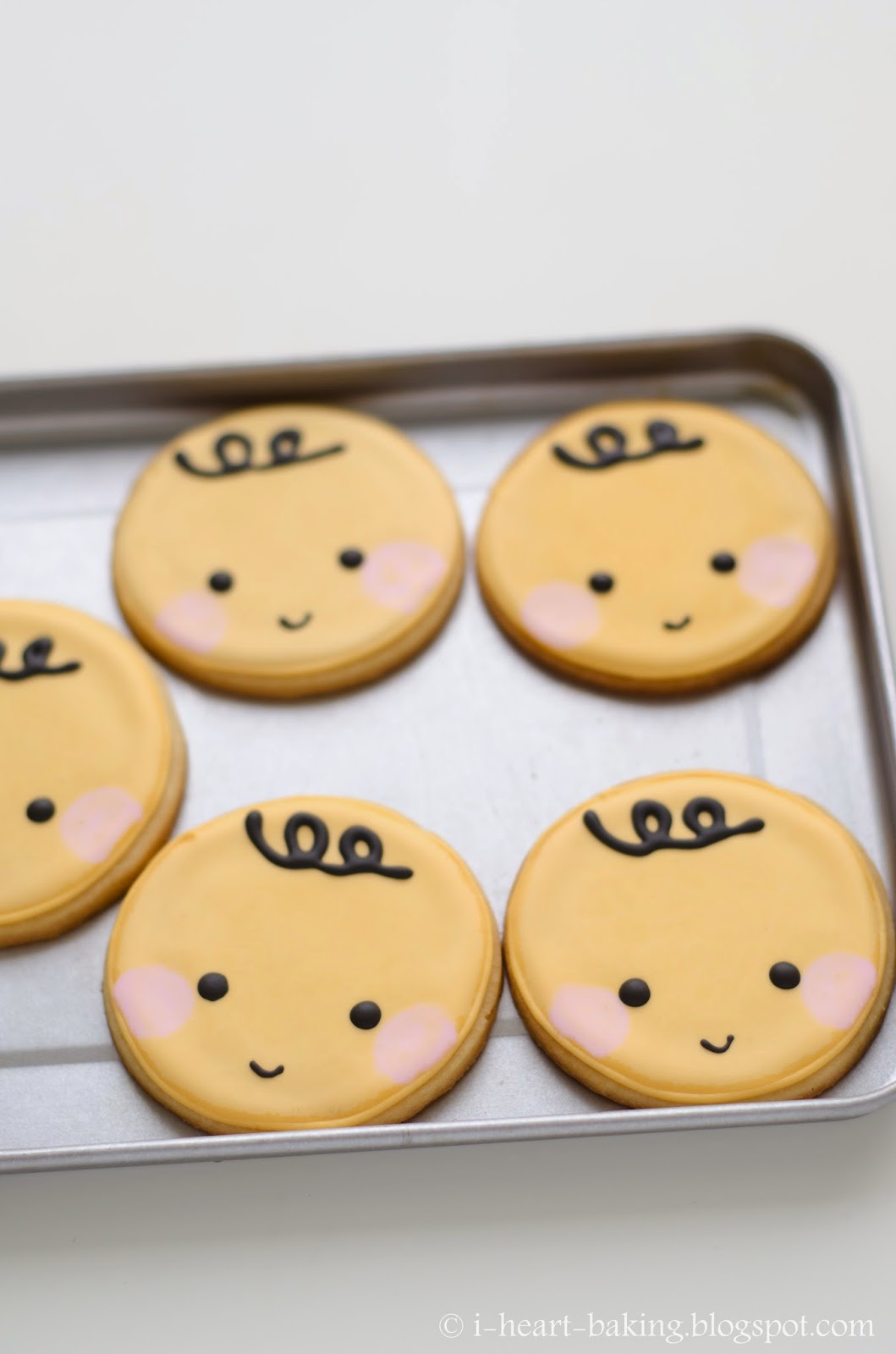 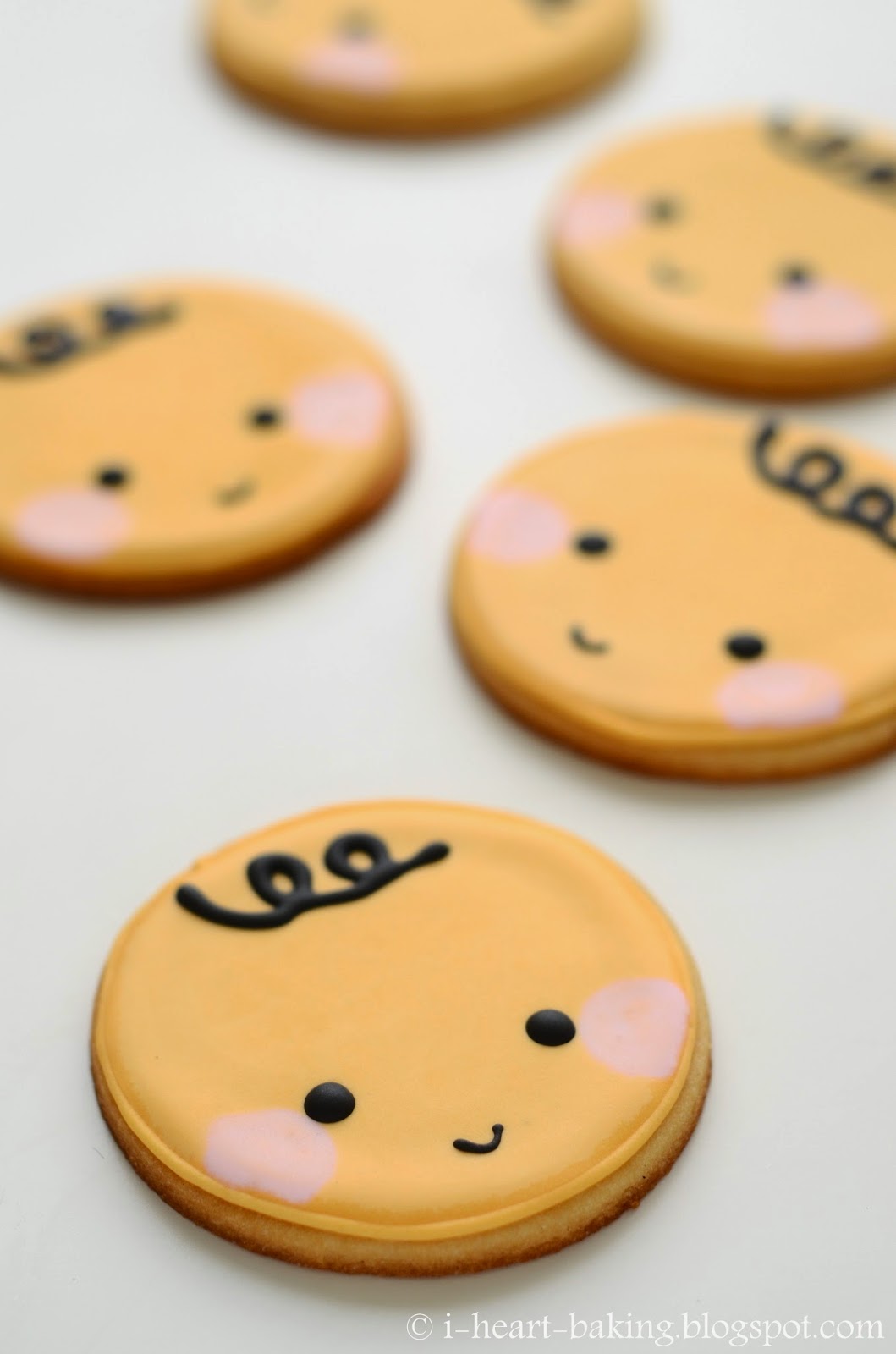 Just look at all those little smiling baby faces! Brings a smile to my face! 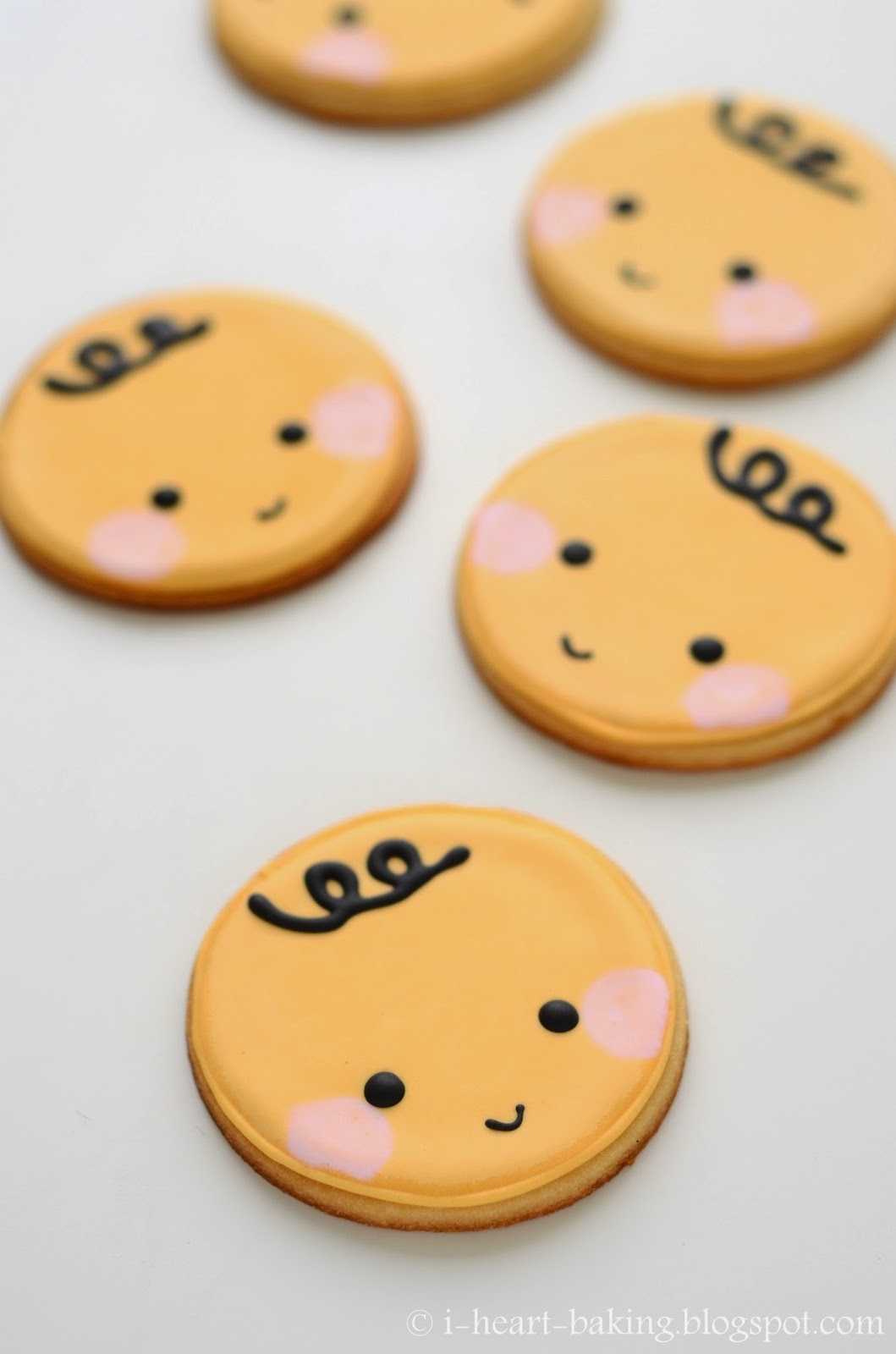 Stephanie ended up giving the cookies out as the favors, which worked out perfectly because they were already individually wrapped! 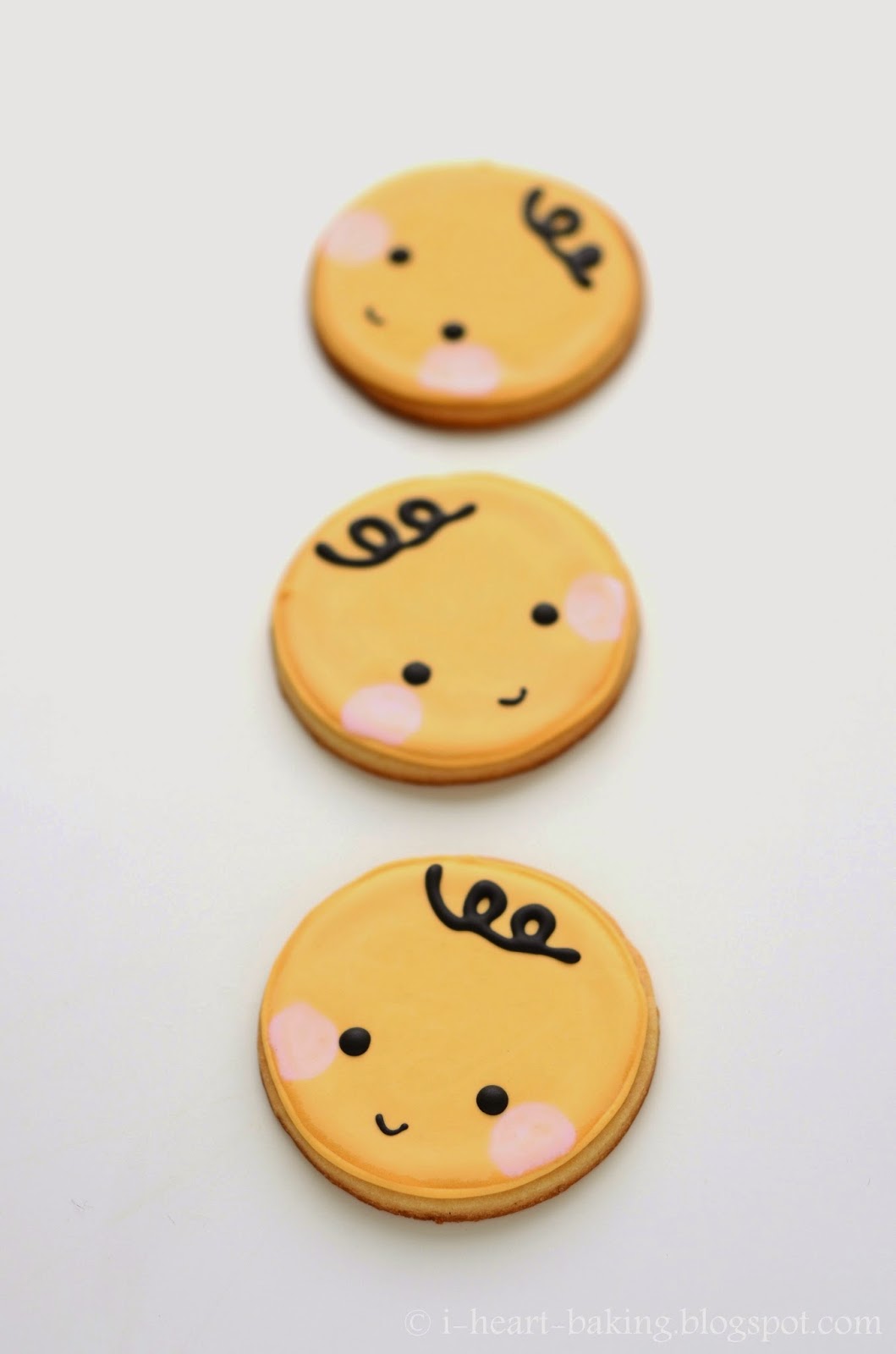