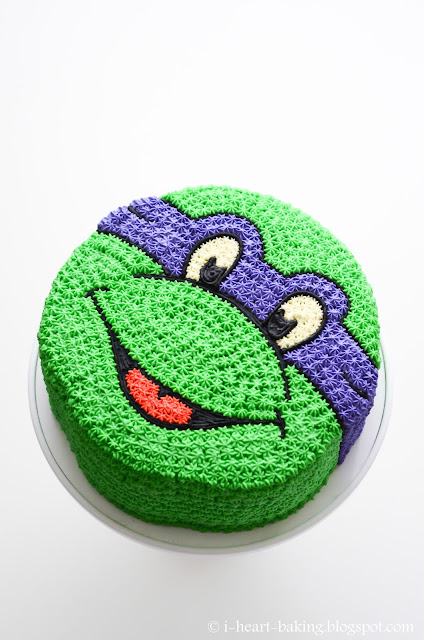 While writing my book a couple of years ago, I was recipe testing for a Keroppi shaped cake, which I ended up bringing to a get-together at my cousin Yvonne's house. It was a chocolate cake filled with peppermint whipped cream, and since there was a lot of cake left she took some to work to share with her coworker. Fast forward a couple of years, and that same coworker asked me to make a Teenage Mutant Ninja Turtle cake for her son's birthday! We decided that I would make the same cake, but this time in the shape of a Ninja Turtle, and filled with freshly whipped cream and fresh strawberries instead of the peppermint whipped cream.

I started by baking up two 9-inch chocolate cake layers, and used a cardstock cutout to trace and cut my Ninja Turtle shaped cake. Then I cut each one in half horizontally to create four layers, and topped each layer with a layer of freshly whipped cream ... 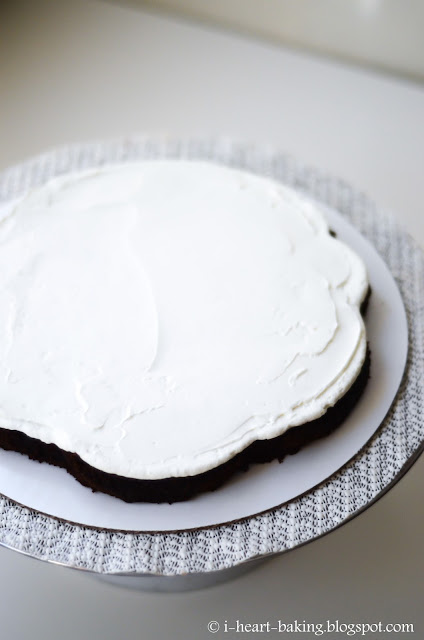 ... as well as a layer of sliced strawberries, and another layer of whipped cream on top of that. 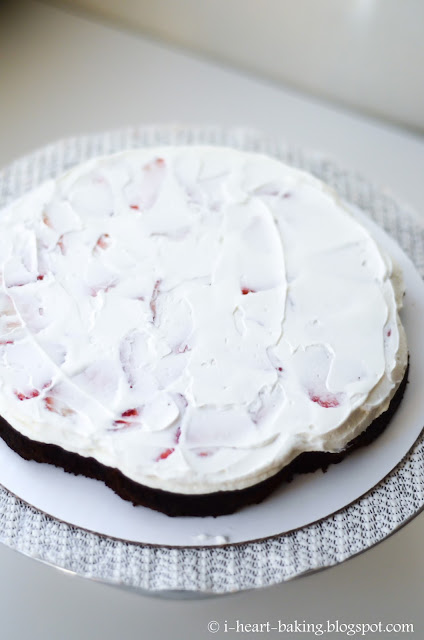 I repeated this process until all of the cake layers were stacked and filled. 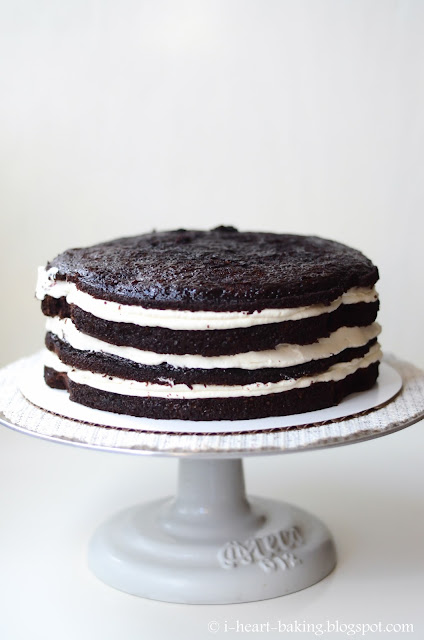 Next I whipped up 2 batches of cream cheese buttercream. I set aside a bit of it to be used and colored later, and then tinted the majority of it leaf green, covered the top and sides of the cake with it, and smoothed it out with an offset spatula. 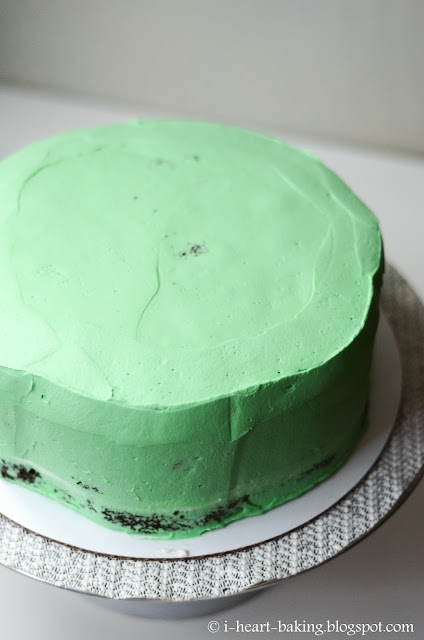 For the details on the face, I used a toothpick to outline the eyes, nose, bandana, and mouth, and then used black frosting with a #3 tip to pipe over the outlines and fill in the mouth and eyeballs. 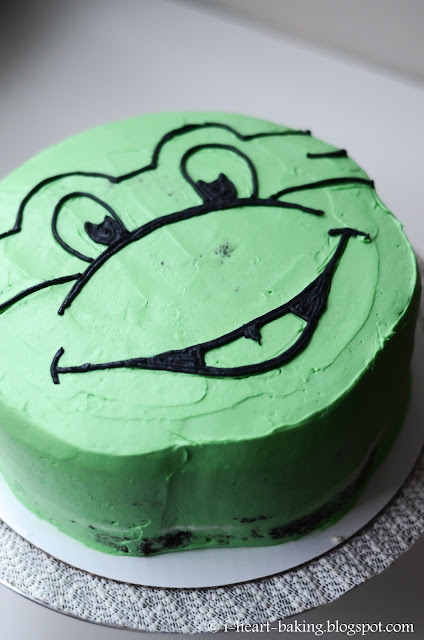 Next I used a medium star tip with the green frosting to fill in the face and the sides of the cake. 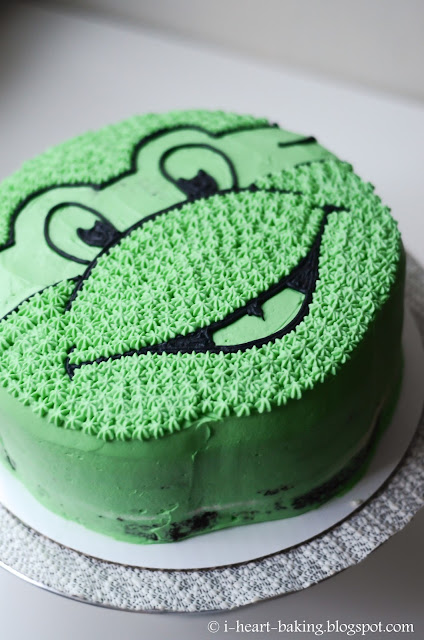 Finally I used the same star tip to fill in the rest of the face - purple for the bandana, red for the tongue, and white for the whites of the eyes. 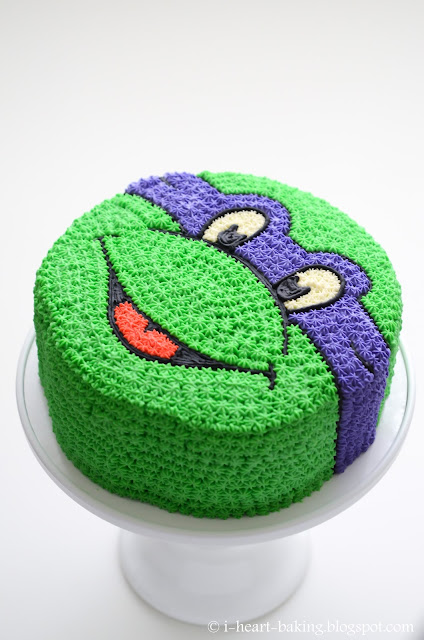 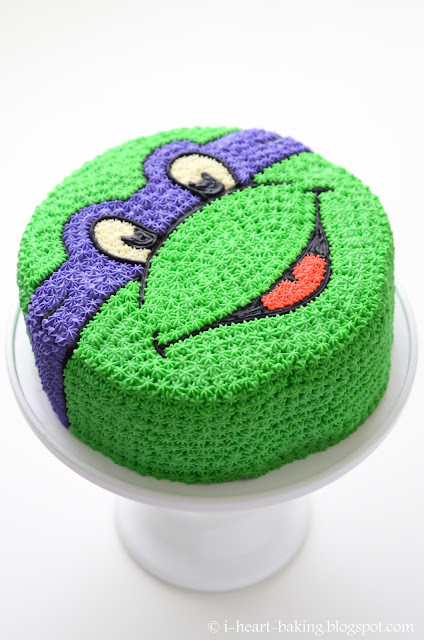 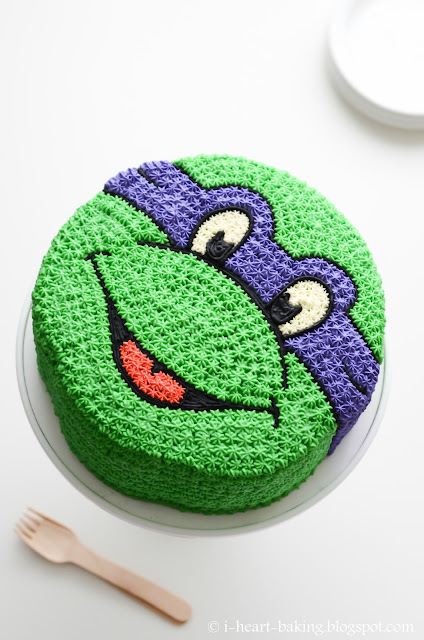 You can find the recipe and instructions in my book, The Hello Kitty Baking Book! 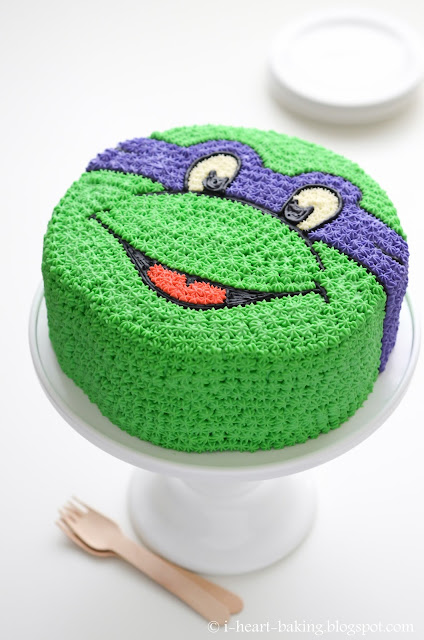