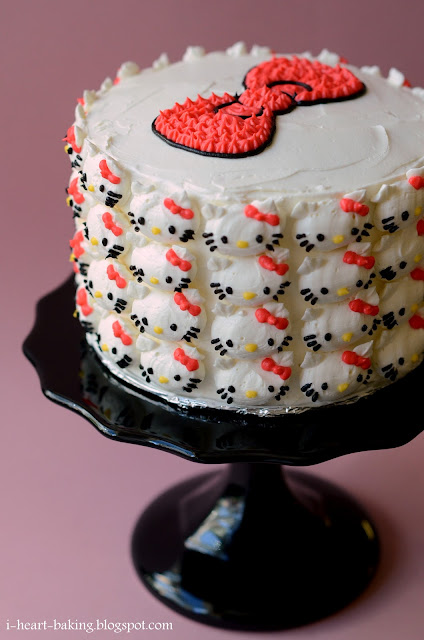 It was my birthday this past week, and of course I had to make a cake for myself!  For my birthday last year, I made this coffee chiffon charlotte with homemade lady fingers, which was such a fun cake to make because: a) I had been wanting to try making a charlotte, and b) I had never made homemade lady fingers before.  But this year, I wanted to make a Hello Kitty cake - I'm sure you all know about my obsession with Hello Kitty by now!  So I made a cake covered with lots and lots of Hello Kitty!  Here is the sketch of what I had envisioned: 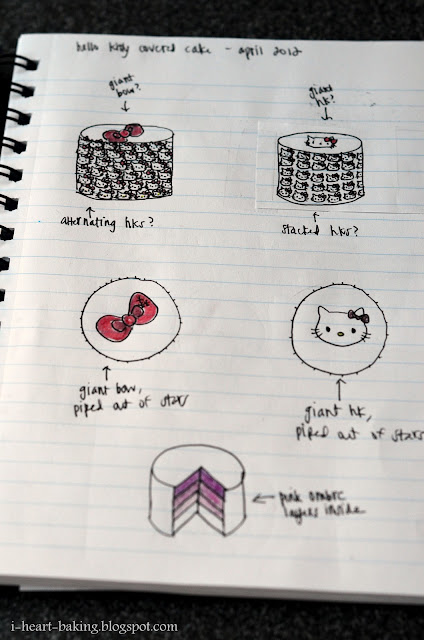 The idea actually came to me while I was piping roses onto this cake using I Am Baker's rose cake method - I had already made a few rose cakes before and suddenly thought to myself, I should cover a cake with Hello Kitty in the same way!  The only thing I couldn't decide was if I wanted the kitties to be staggered (like with the rose cakes), or in neat rows.  I decided to go with the neat rows. 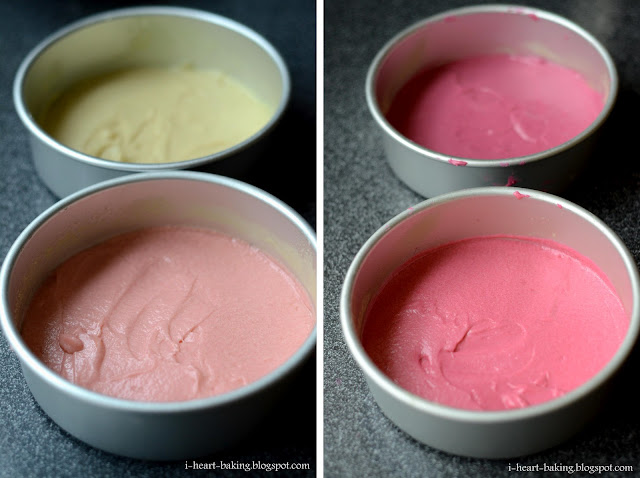 I wanted the cake portion to be pink, so I made an ombre vanilla cake with varying shades of pink. 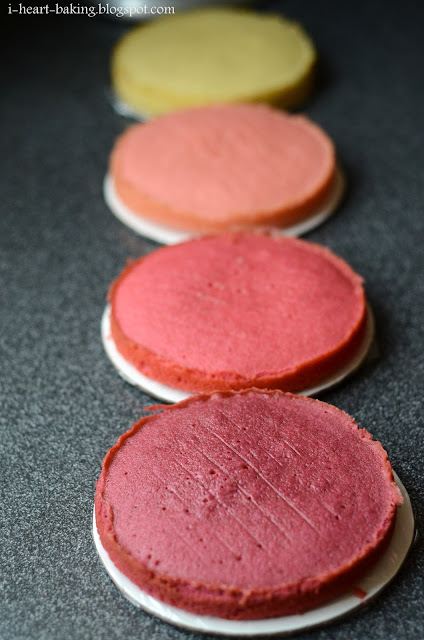 Once the cake was baked and cooled, I started on the filling.  I decided to do a decadent chocolate ganache, so I simply heated some heavy cream and then poured it over my dark chocolate, waited for the heat to melt it, and then stirred it up until the chocolate became smooth and glossy.  Once the ganache came to room temperature, I whipped it until it became fluffy and light, and then piped it in between my layers of pink cake. 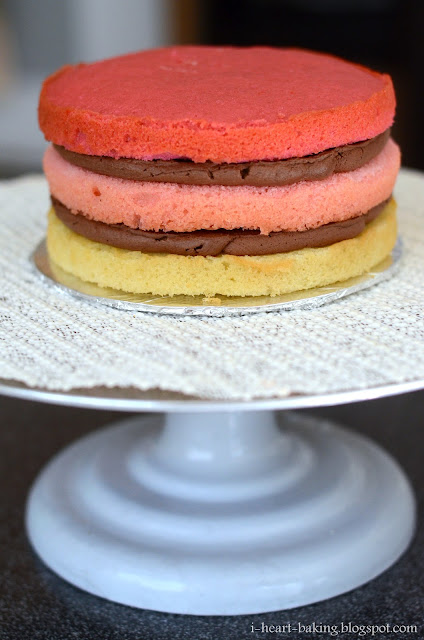 As for the frosting, lately my go-to frosting has been a cream cheese cheese buttercream, but I have really been wanting to try making swiss meringue buttercream, which I tried out for the first time! 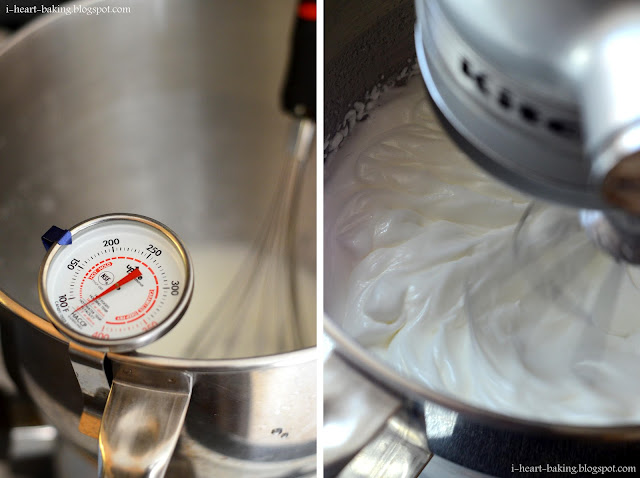 The frosting was definitely more complicated to make than a regular buttercream, because you have to heat egg whites and sugar to a certain temperature, and then whip them into a meringue.  Then you add butter a chunk at a time, until it comes together into a beautiful glossy buttercream.  But the extra effort was worth it, because it came out so silky and smooth, and wasn't too sweet at all.  I tasted the frosting right before I frosted the cake, and I was so excited because it tasted like whipped cream!  And it was so easy to work with because it was so light and fluffy and smooth. 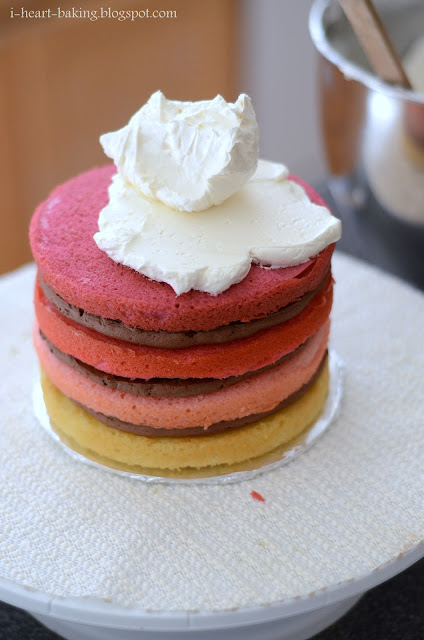 So I did a quick crumb coat over the entire cake, and then a second coat as well. 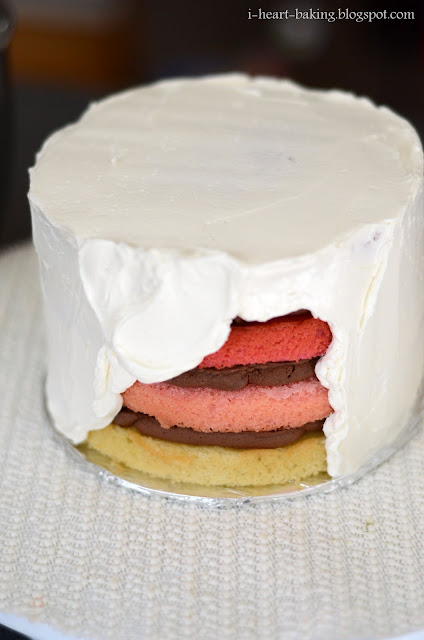 And then came the fun part - piping Hello Kitty!  I piped her the same way I do on my Hello Kitty cupcakes and mini cupcakes (my favorite thing to pipe on cupcakes), except this time I piped her on the sides of the cake. 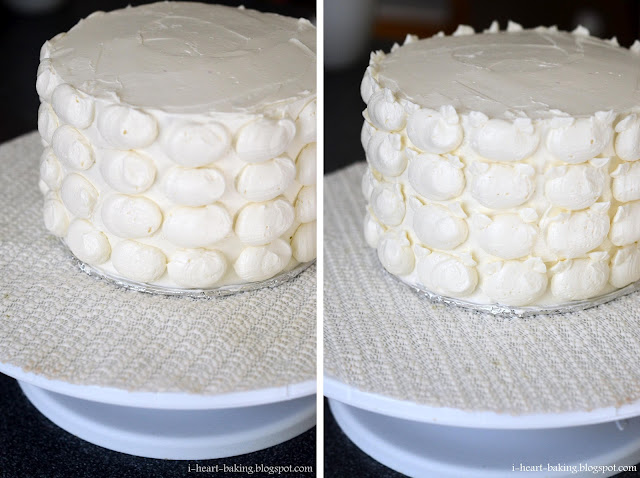 First I piped the Hello Kitty heads all the way around the cake, so that they would be evenly distributed along the sides.  Next I piped the ears with a leaf tip.  At this point it didn't look like much, until I brought her to life by adding the eyes, whiskers, bow, and nose. 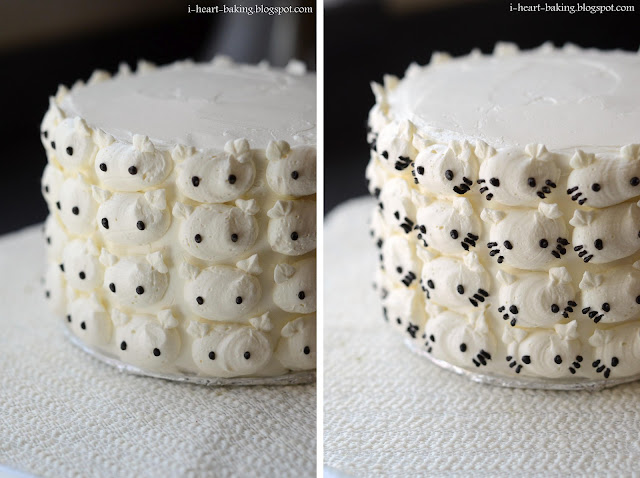 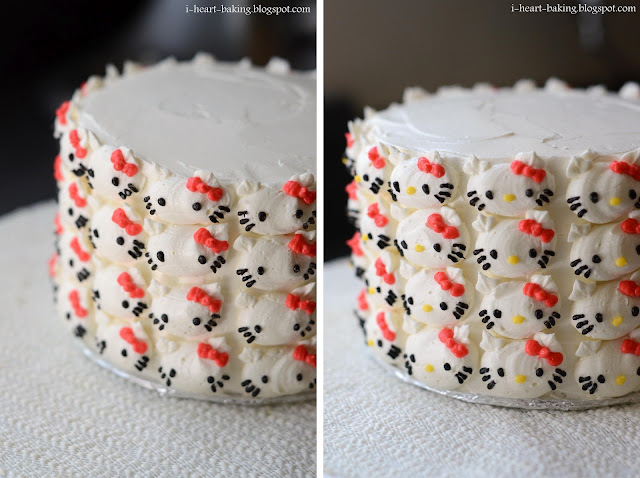 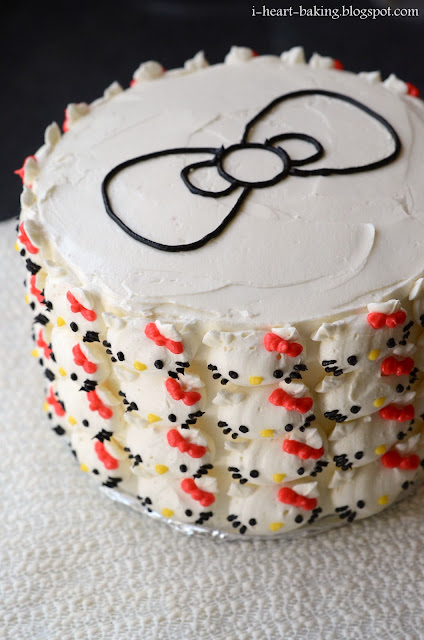 As for the top of the cake, my inspiration for the bow came from this Hello Kitty cake that I had made for my daughter (which I also later made again for a bridal shower).  My favorite part about the cake was the bow, so I decided to pipe that same bow onto this cake as well. 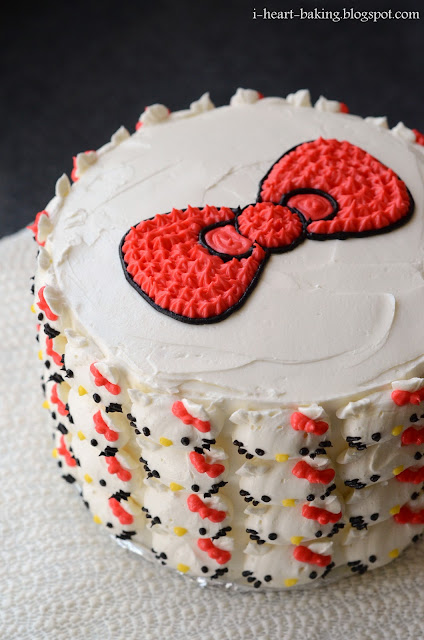 When the cake was finally done, I was seriously giddy.  It was my dream birthday cake.  A ton of Hello Kitty, her cute little bow on top, and served on top of my brand new Rosanna rococo noir cake stand!  Wheeeee! 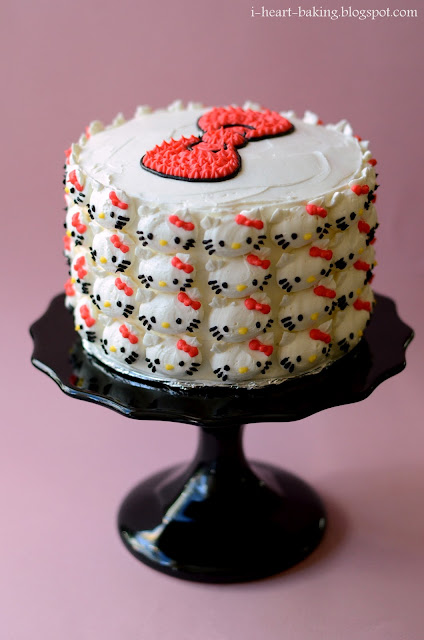 Later on when we ate the cake, the frosting was still silky but didn't have the same 'whipped cream' taste.  Perhaps because it had hardened in the fridge, or because smoothing it on the cake made it more compact, but it had a much more buttery taste than when it was freshly whipped. 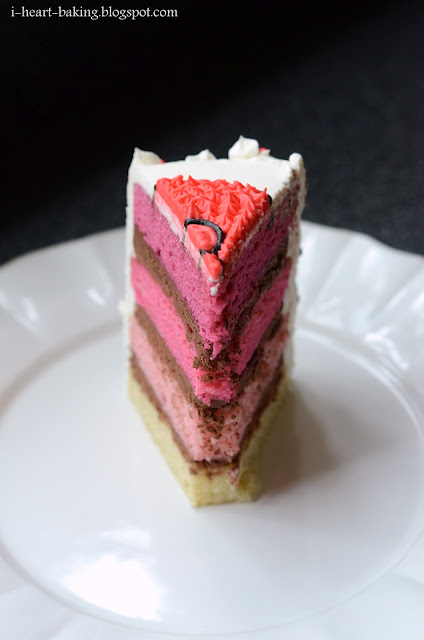 Also I missed that cream cheese 'tang' from my favorite cream cheese buttercream, so I've been eyeing this swiss meringue cream cheese frosting at 6 Bittersweets to try out next time! 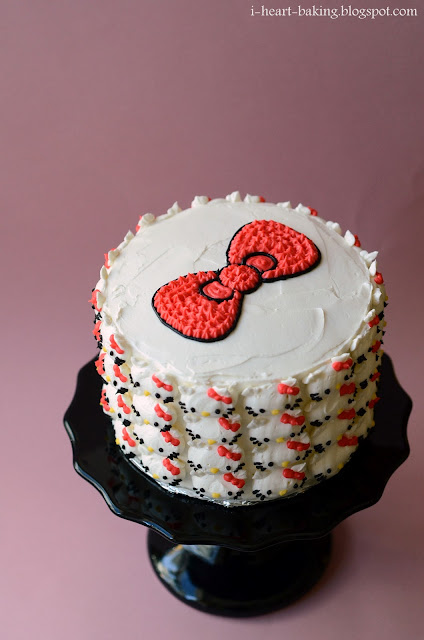 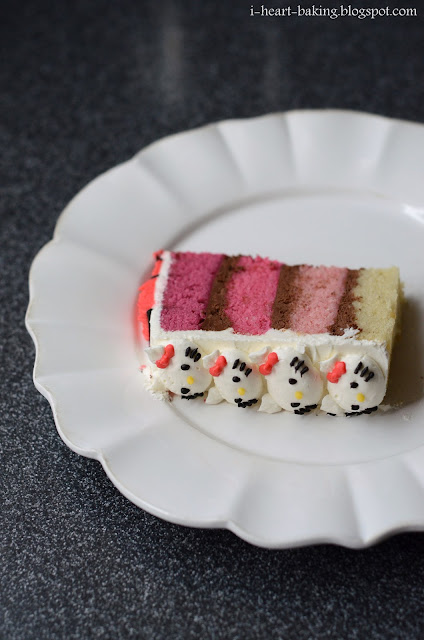 I was so excited about this cake that I posted it on Instagram as well! 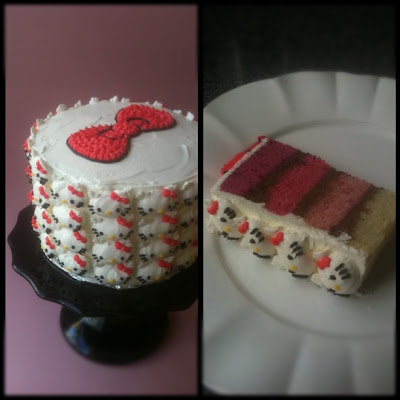 In the end, I just couldn't bear to eat the Hello Kittys.  So I saved them for my kids to eat - they had no problems digging right in! 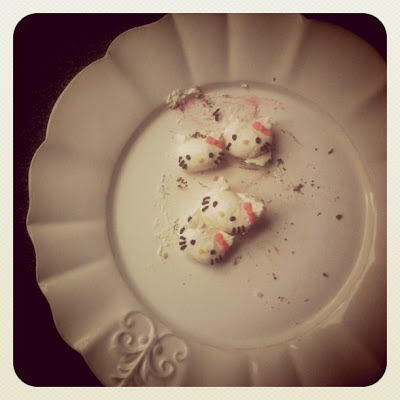 *** Update:
You can now find my recipe for Pink Ombre Hello Kitty Cake in my new book, "The Hello Kitty Baking Book"! Enjoy!
Posted by michele at 11:36 PM