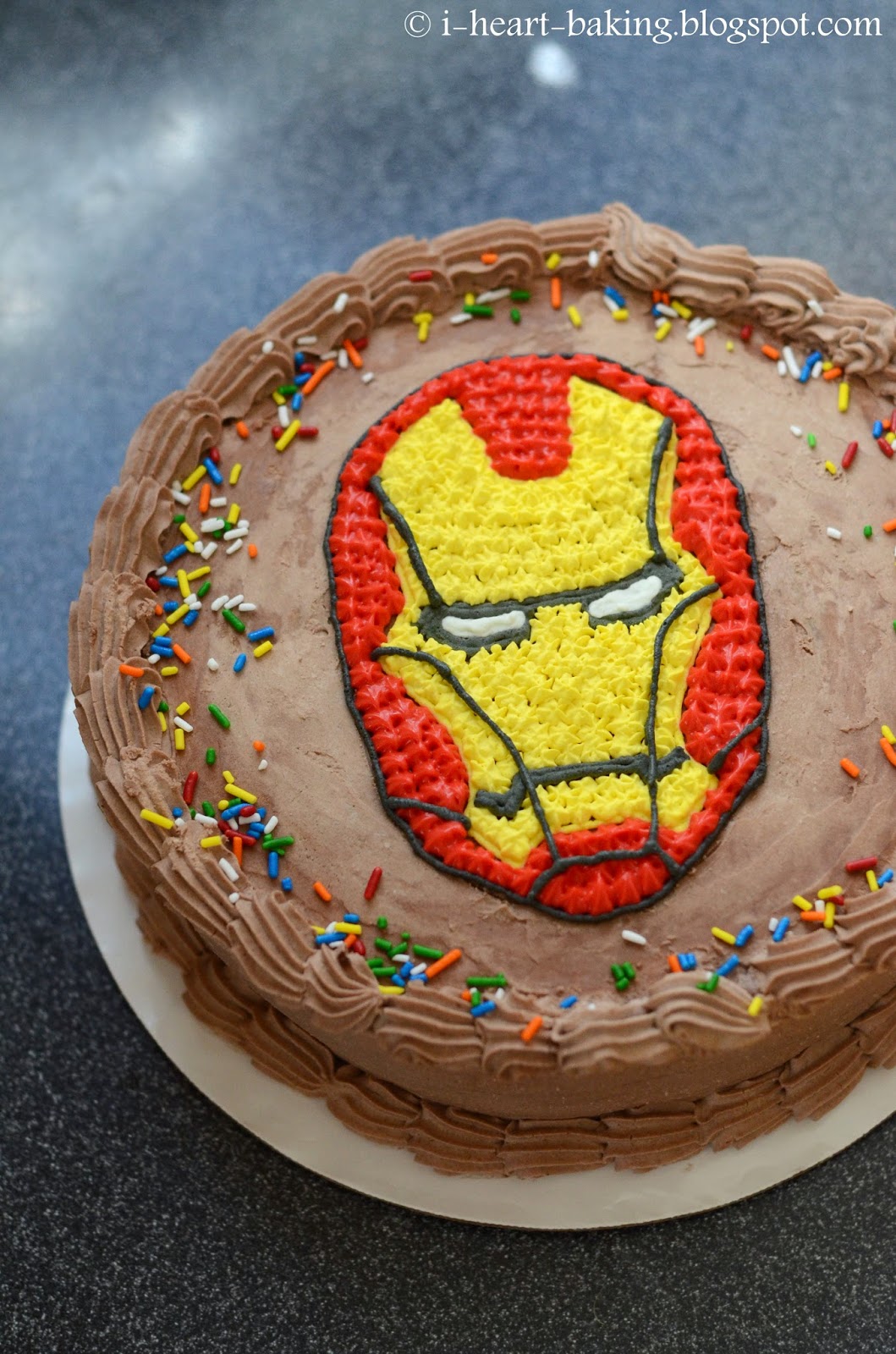 My oldest baby Matthew is turning SEVEN next week! How did seven years go by just like that?!

Speaking of how fast time flies, it's been a year since his last birthday and I never got around to posting the cake I made him! In the past I've made him a Spiderman cake, as well as a Superman cake, and last year he had insisted on having an Iron Man cake! We ended up having just a small family get-together, so I made him a cookies-n-cream ice cream cake, with Iron Man piped on the top. Not my best work, but he still loved it!

The entire ice-cream cake recipe can be found in my new book (look for the Badtz-Maru ice cream cake), so I'll just do a quick summary of the steps. It started with homemade cookies-n-cream ice cream, which I churned in advance and then poured into an 8-inch round cake pan that I had lined with plastic wrap, before letting it set in the freezer. (You may have a little ice cream left over, but no worries you can eat it like soft-serve right away!) 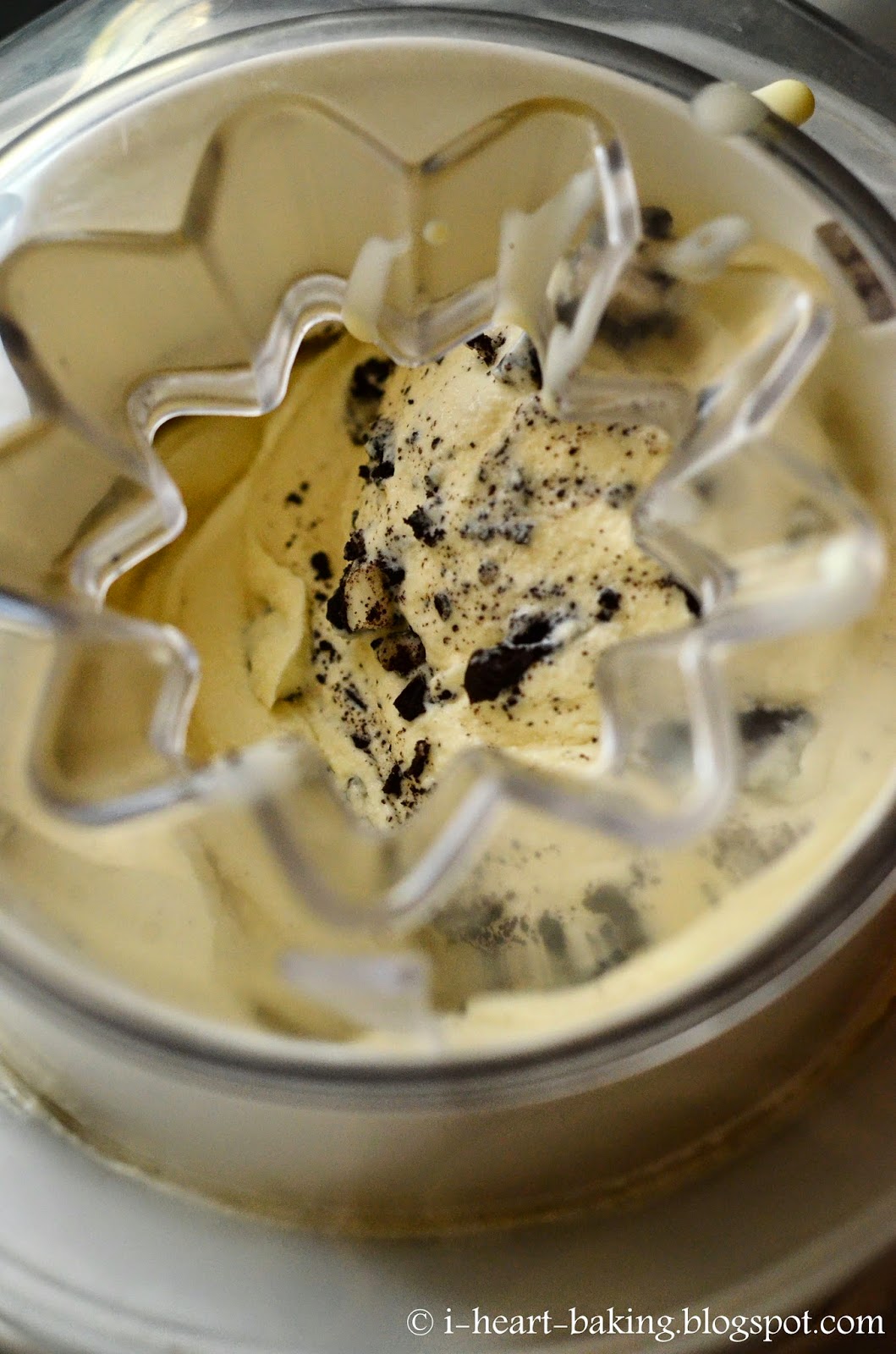 Closer to the date of the get-together, I made the chocolate cake layer. Once it was cooled (you may want to stick it in the freezer for a bit so that it's nice and cold and won't melt the ice cream layer), I unwrapped my ice cream layer and placed it on top of the cake layer. Then I used an offset spatula to smoothout the sides where the two layers meet, and then let it chill in the freezer while I made my whipped cream frosting. 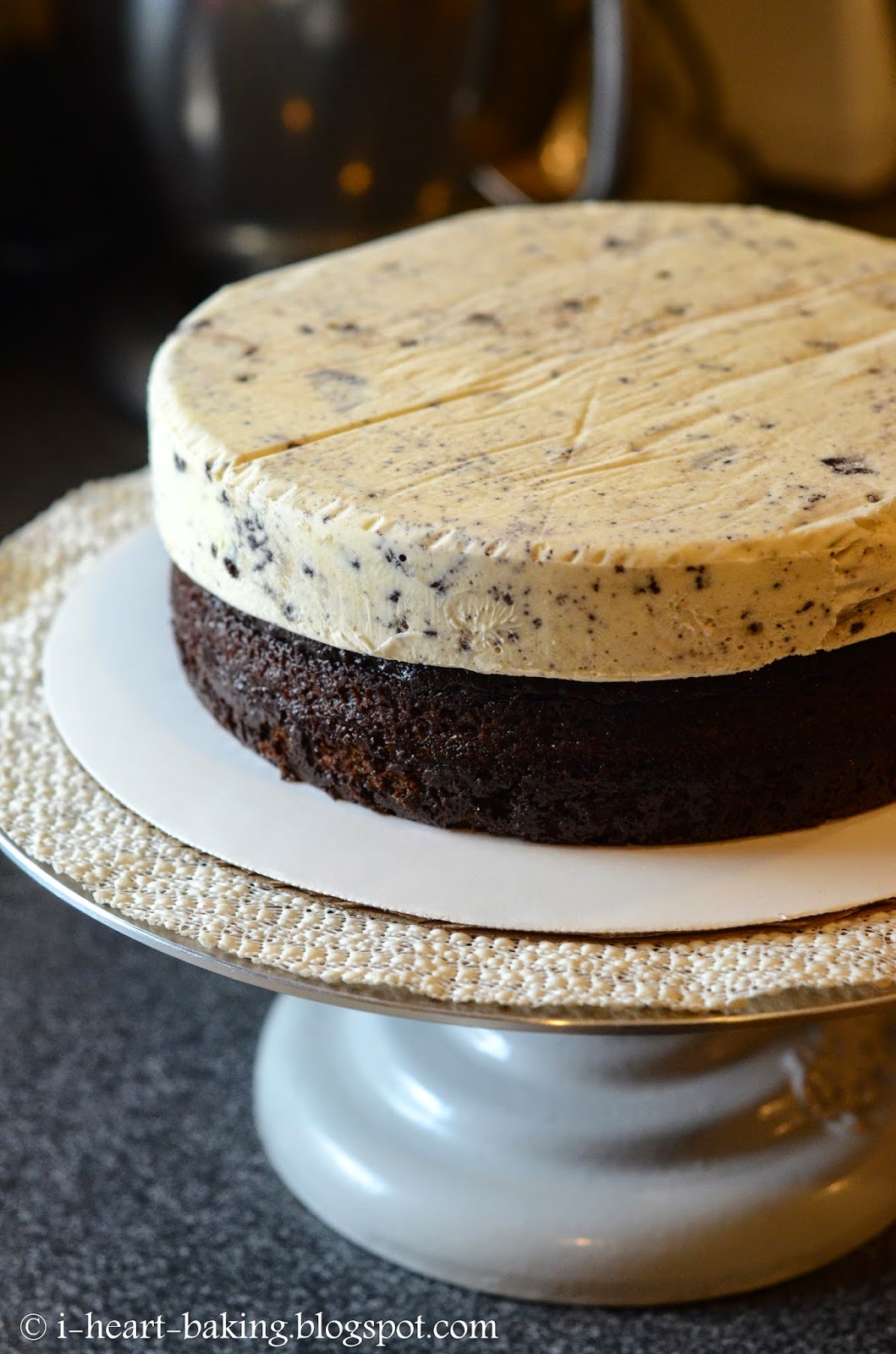 Once my whipped cream was ready, I set aside about a cup of it, and to the rest I added cocoa powder to make it chocolate whipped cream. Then I quickly frosted the top and sides of the cake, working as fast as I could so the ice cream wouldn't melt. 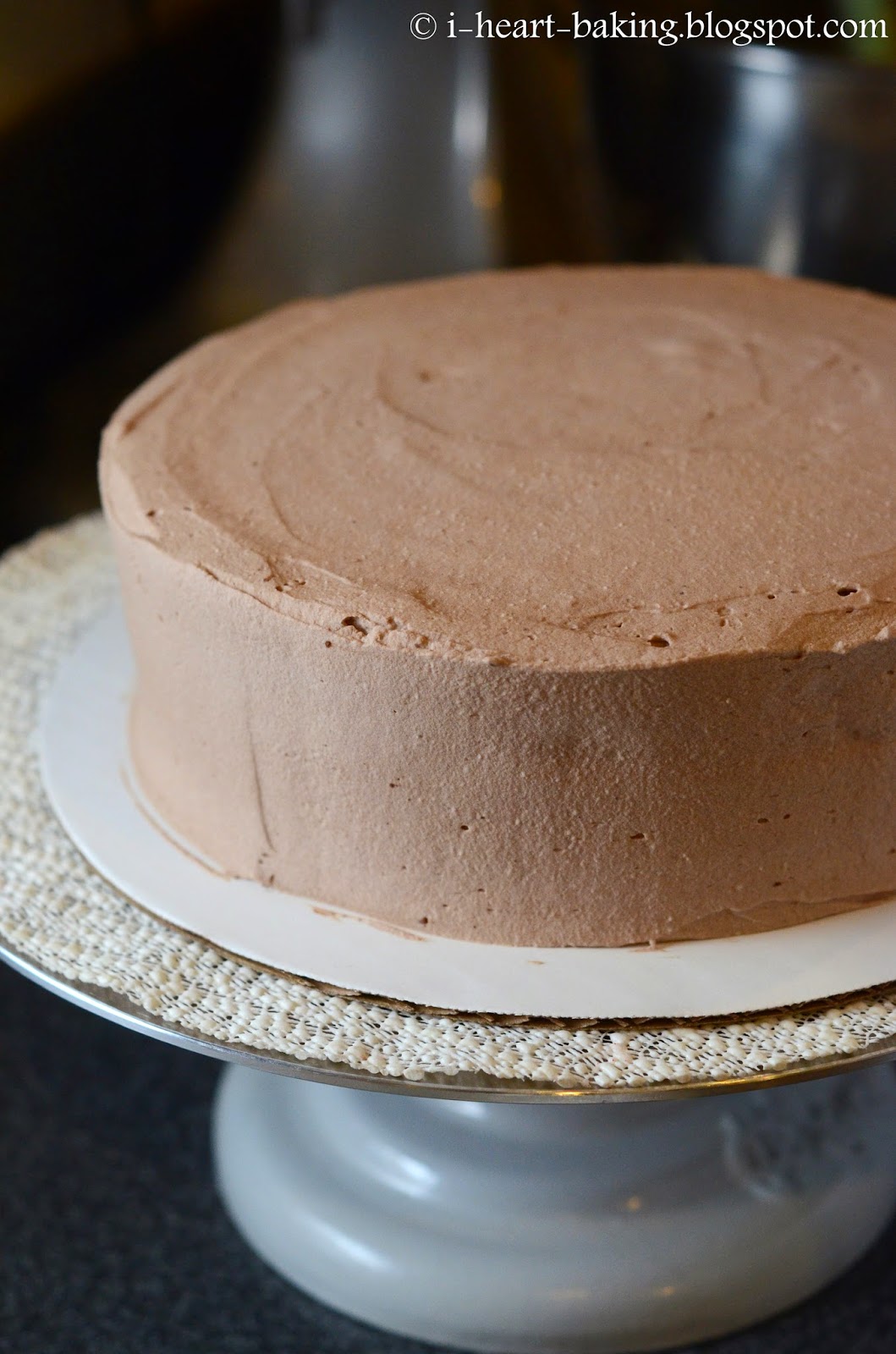 Next I filled my piping bag (fitted with a Wilton #21 star tip) with the chocolate whipped cream, then piped a shell border on the top and bottom of the cake. Then back into the freezer it went. 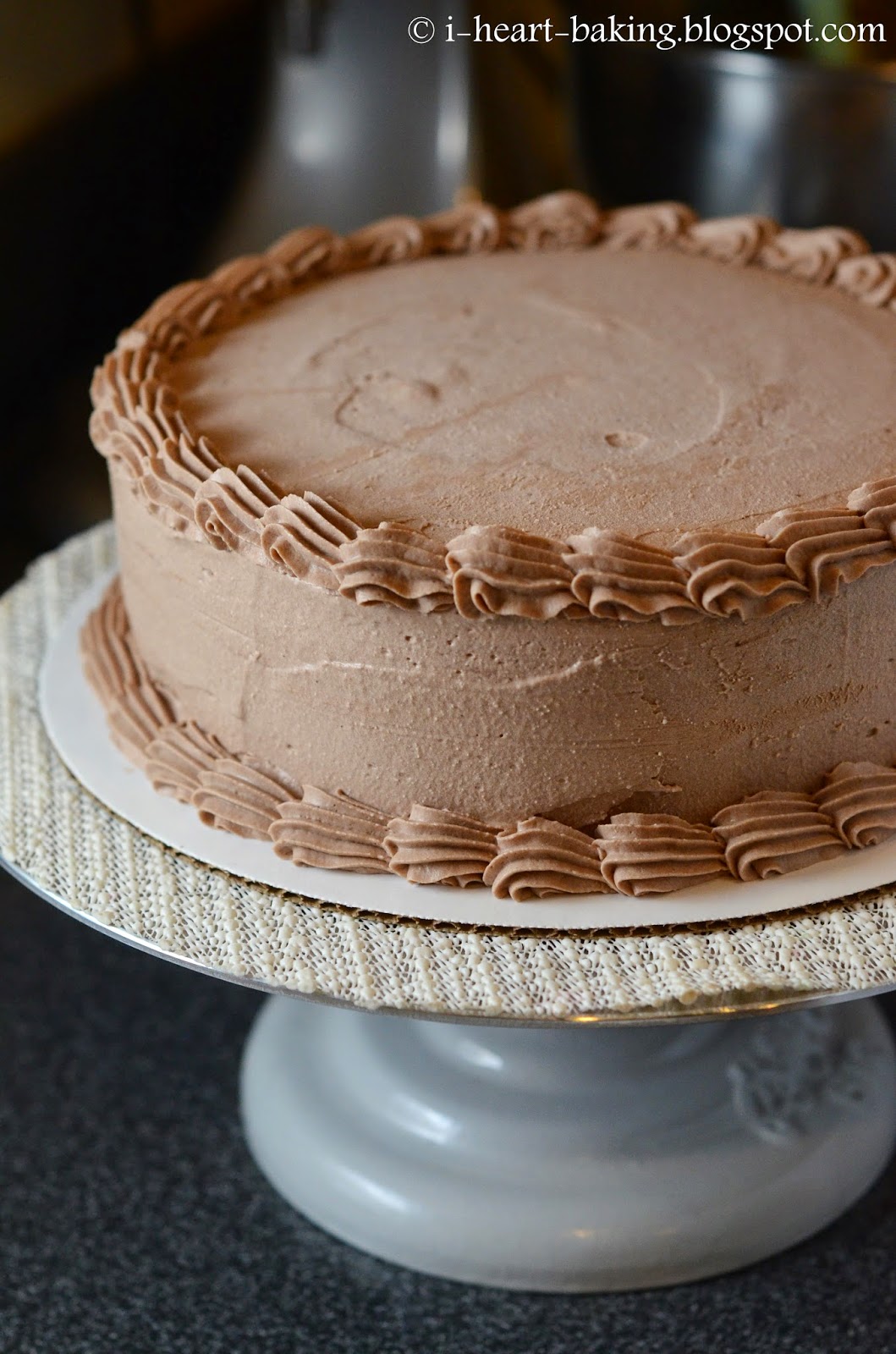 With the frosting that I had set aside, I divided it and colored it black, red, and yellow, leaving just a tiny portion of white. Then I piped my Iron Man face, filling it in with piped stars using a Wilton #16 tip. Then i added some rainbow sprinkles around the edges of the cake to make it look more festive. 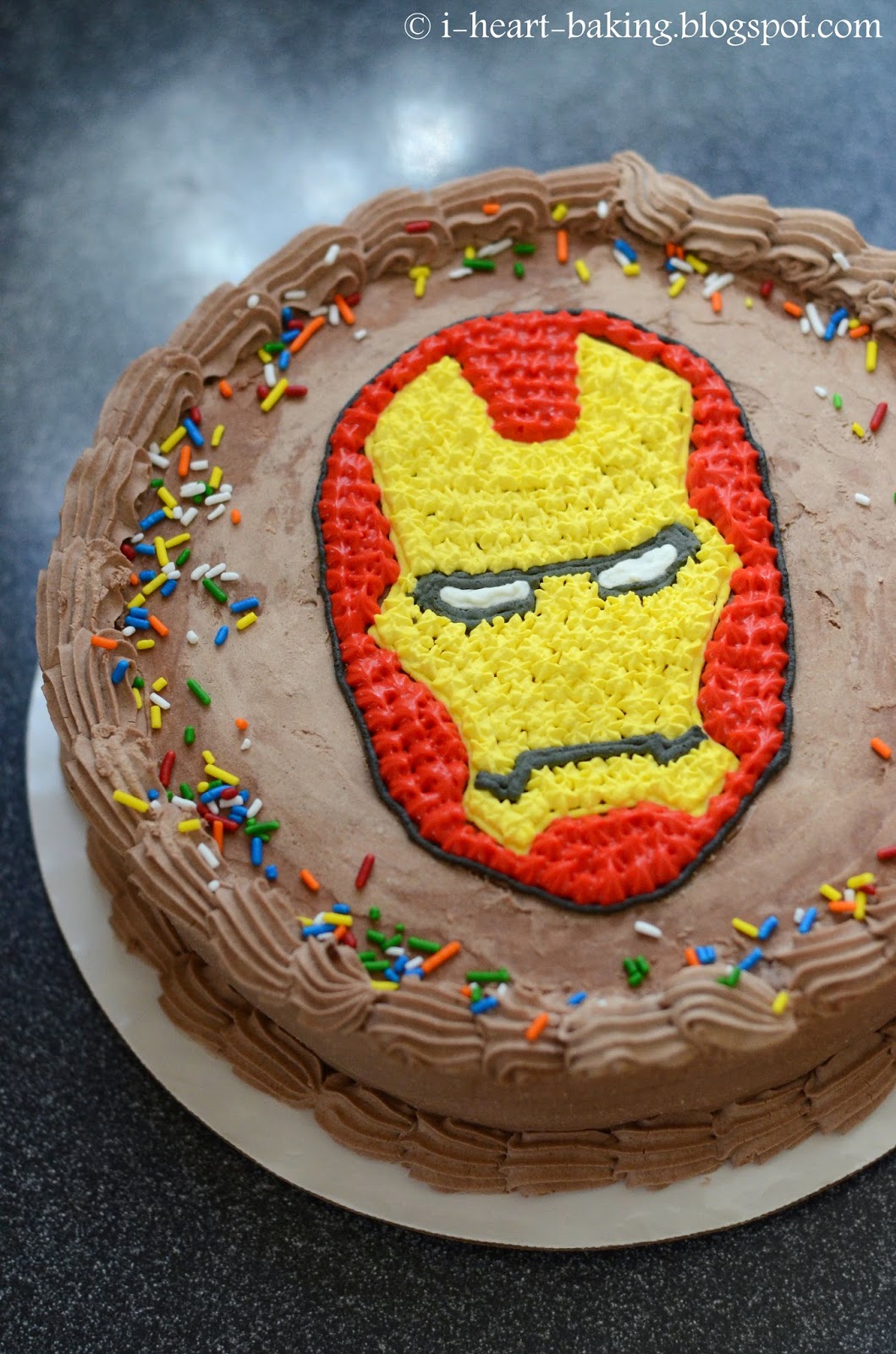 When I was done it still didn't look complete. Something looked wrong with Iron Man's face. So I added some vertical lines to make him look more Iron-Man-y. 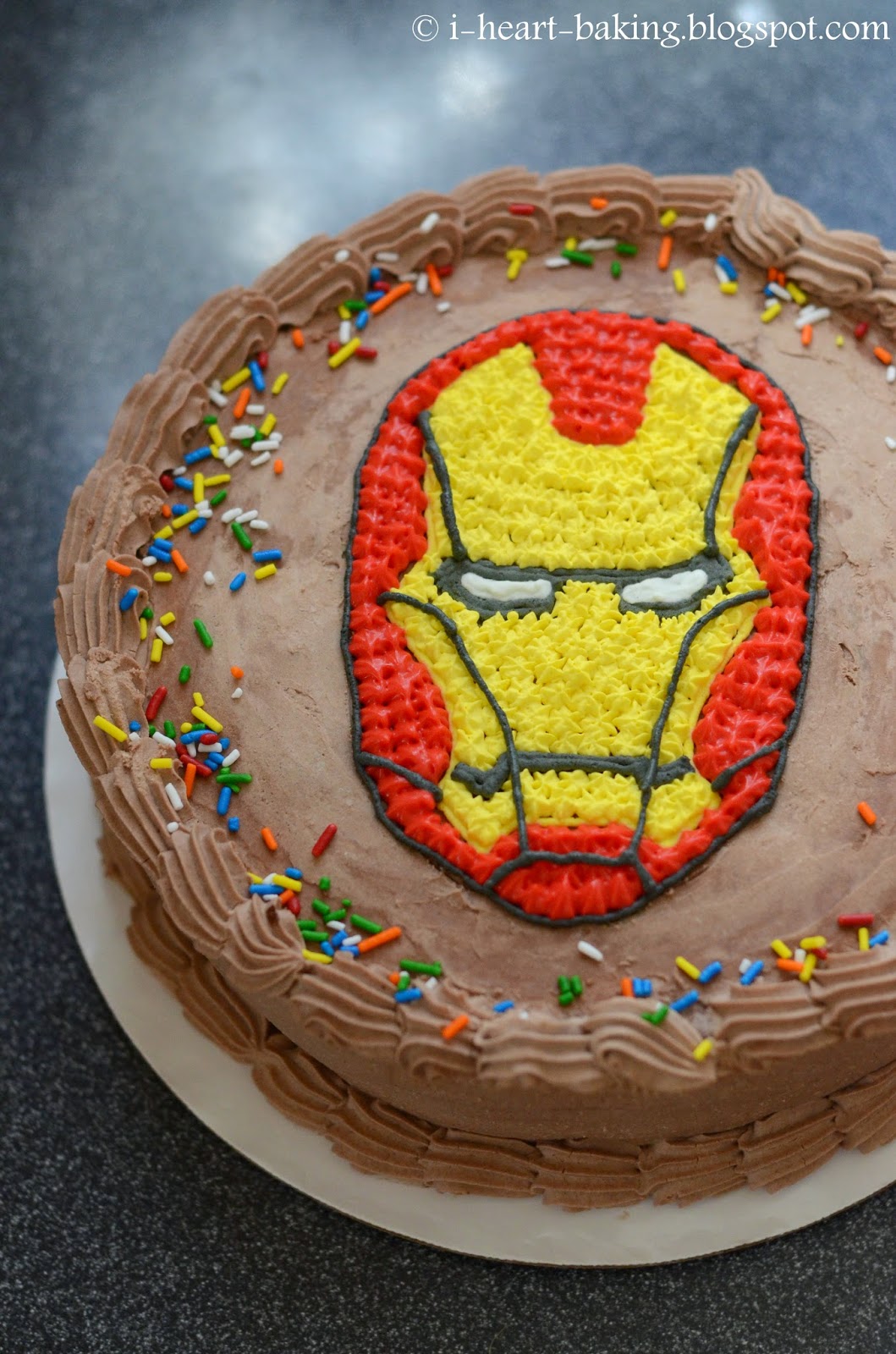 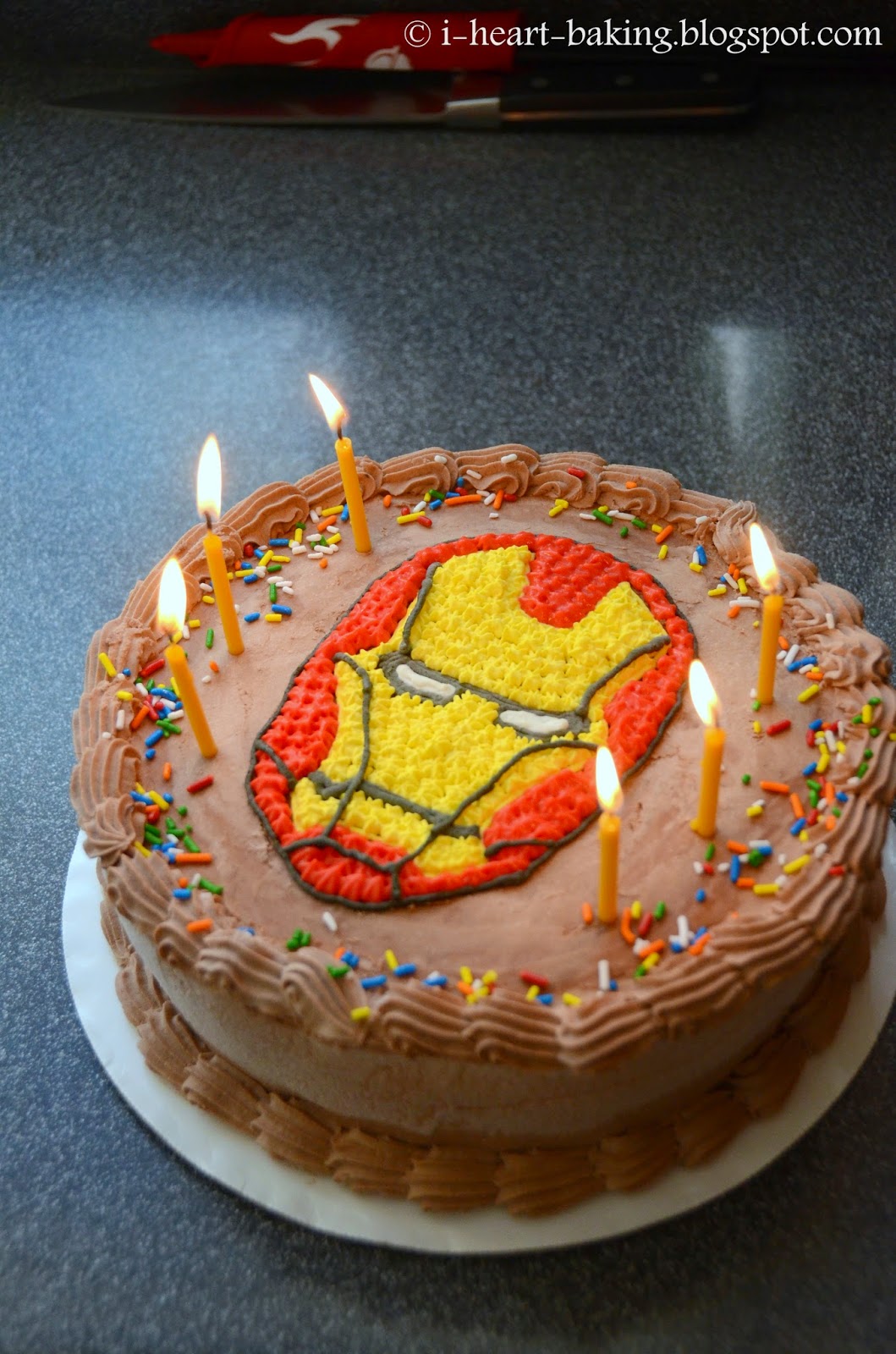 Hmm .. it still didn't look right, but oh well, I was out of time. Good thing 6-year olds aren't too picky about minor details! 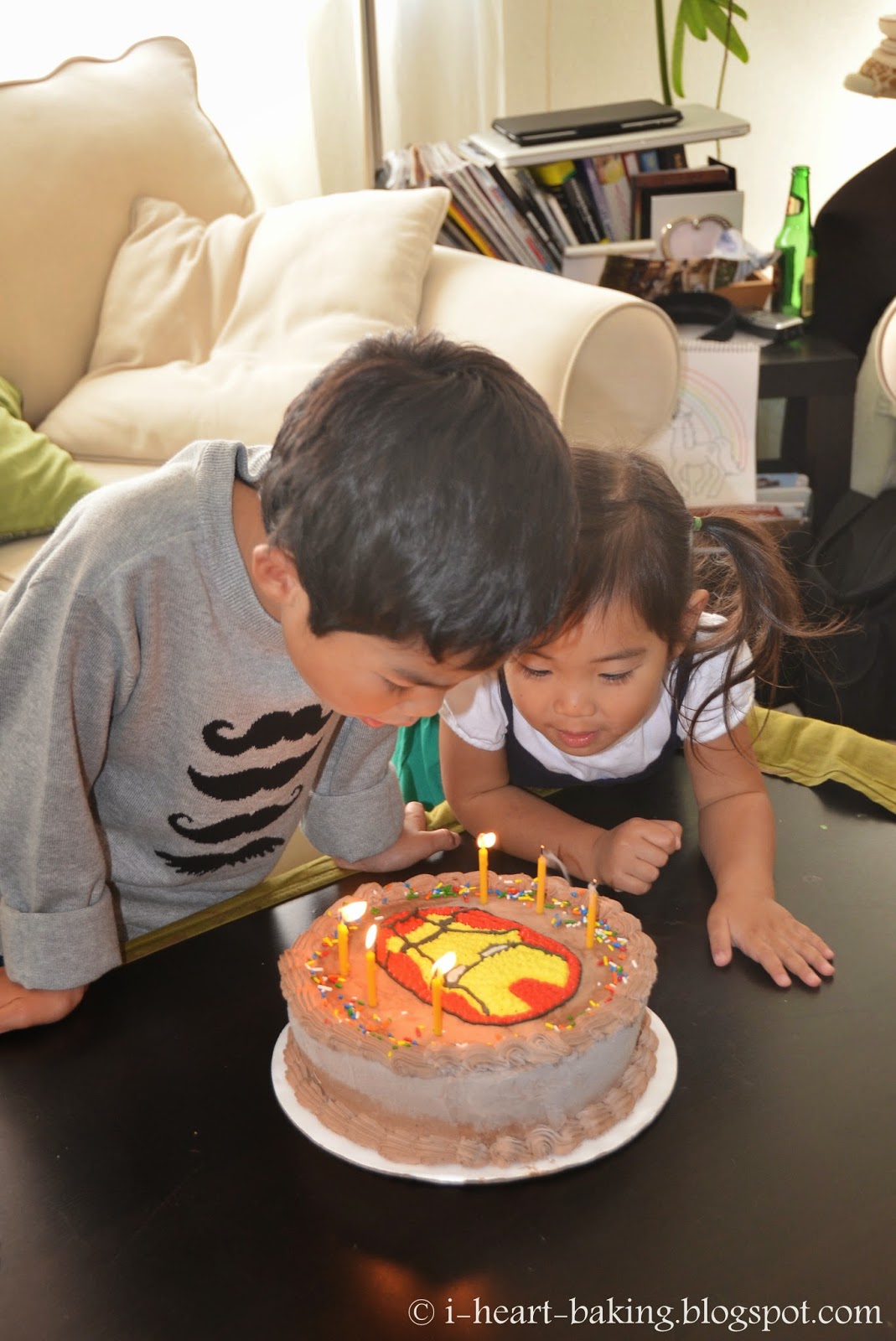 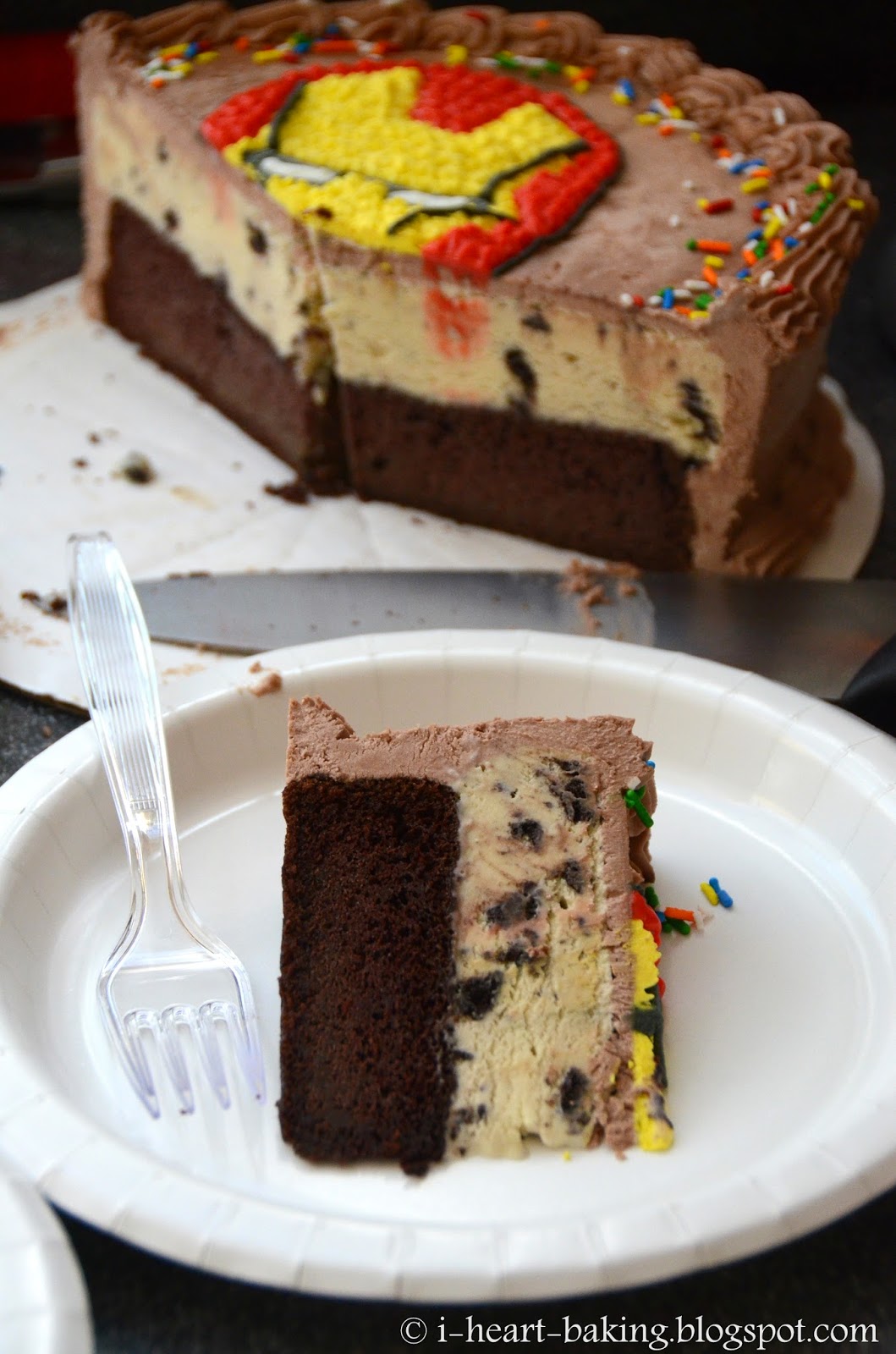 And here's the birthday boy and his cake :) He was so happy! 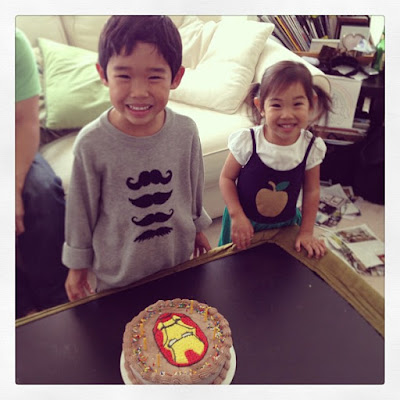 Stay tuned for details on this years's upcoming birthday cake! 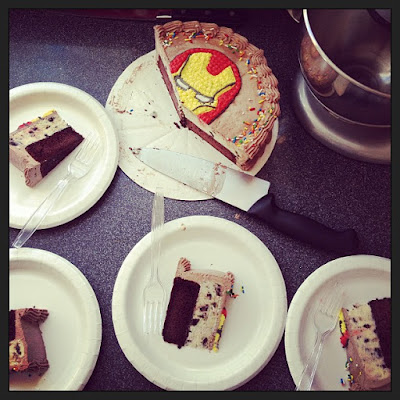