pistachio cupcakes for the zoo 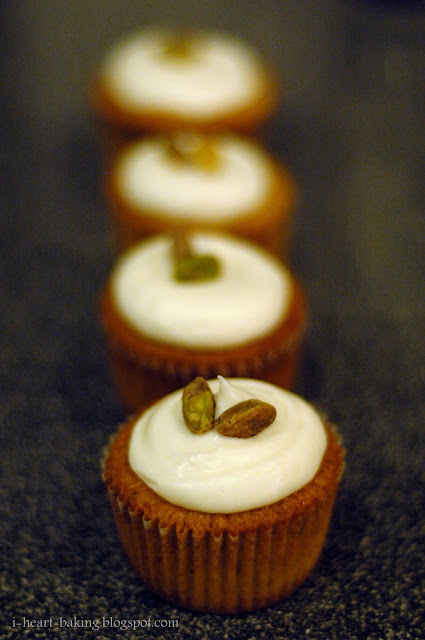 On Sunday, we took my little boy Matthew to the zoo for his third birthday.  We were bad parents this year and didn't plan him a real birthday party (other than a little party at his preschool).  So we took him to the zoo instead.

My cousin and some friends and their daughter were going to be joining us, so I wanted to bake some cupcakes for us to snack on at the zoo.  My go-to cupcake is a chocolate cupcake with chocolate cream cheese frosting, but I wanted to try something different this time.  Since pistachio is one of my favorite ice cream flavors, I thought I'd try a pistachio cupcake!

The first batch was bad.  I had decided to try a recipe that used a box of pistachio pudding, but the end result was a dough-y, gummy cupcake that tasted like a cake mix!

The second batch was a Martha Stewart recipe that used real pistachios, but it was heavy and dense and came out more like a muffin.  So I added some baking powder, canola oil, milk, and almond extract, and also decreased the baking temperature and baking time, and out came a nice, moist pistachio cupcake!  Although, it was a tad too sweet and a little bit greasy, so next time maybe I'll try adding more flour.

I topped it with a honey and almond cream-cheese frosting, decorated them with some shelled pistachios, packed them in a cooler fitted with ice packs, and off to the zoo we went!

Happy Birthday, Matthew!  Hope you had fun at the zoo! :)